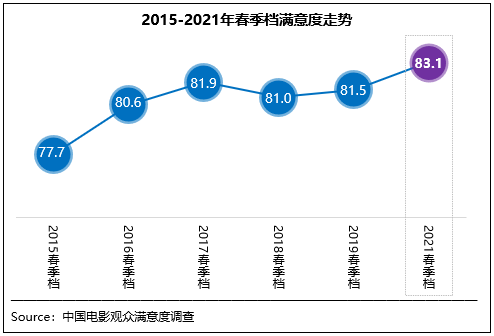 People’s Daily OnlineBeijing, May 7th (Jiang Bo) May 6th,Chinese filmThe Art Research Center officially released the 2021 Spring FileChinese filmAudience Satisfaction Survey” (hereinafter referred to as the “survey”). The survey showed that the audience satisfaction score in the spring of 2021 was 83.1 points, the highest score in the same period since the survey started in 2015. Among them, the 51st film “Above the Cliff” topped the list with 85.8 points, the Ching Ming film “My Sister” and the 51st film “Sweeping Darkness·Decisive Battle” ranked second and third respectively.

The three major indexes of “cliff”, “sister” and “sweeping black” each topped the list

Among the 10 key domestic films from the Qingming file to the 51st file, 6 have entered the “satisfying” range with a satisfaction score of over 80. Among them, “Above the Cliff”, “My Sister” and “Sweeping Darkness: Final Battle” won the top three in terms of viewing, ideological and dissemination, and each of the three films won an index championship. Director Zhang Yimou’s “Above the Cliff” broke the silence of domestic spy films for many years, with 85.7 as the highest viewing time; “My Sister” refracted social reality through the stories of two generations of “sisters”, aroused the audience’s resonance, and had a spread of 84.6. Ranked first in terms of points; “Sweeping Gangsters·Decisive Battle” showed the original appearance of the nationwide special struggle against Gangsters and evil forces, and demonstrated the firm determination of the party and government to eradicate criminal forces. It scored the highest ideological score with a score of 87.5.

It is worth mentioning that the high satisfaction of “Above the Cliff” and “My Sister” has effectively attracted the audience and boosted the box office. “Above the Cliff” single-day box office and moviegoers have overtaken “Your Wedding” on May 3, ranking first in the schedule, and “My Sister” has won the single-day box office championship for 14 consecutive days since its release on April 2. 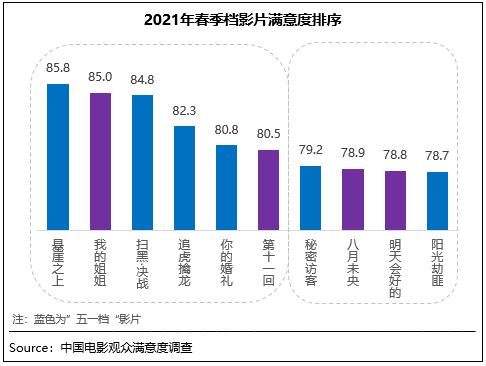 The survey shows that the overall quality of the films in the spring of 2021 is relatively clear, and the ratings of ordinary audiences and professional audiences are basically the same. Among the 10 films, “Above the Cliff”, “My Sister”, “Sweeping the Darkness·Decisive Battle”, and “Chasing the Tiger and Catching the Dragon” all received high ratings from the audience. The overall evaluation of “The Eleventh” and “Your Wedding” is in the middle, among which professional audiences have a higher evaluation of the “Eleventh” artistry, while the general audience prefers “Your Wedding” which has public resonance.

Among the 12 index scores for professional audiences, “Above the Cliff” won the highest scores of 10 indicators including genre creation, actor performance, and wonderful dialogue. “Chasing the Tiger and Catching the Dragon” scored the highest in the way of communication. In the evaluation of ordinary audiences, the five indicators of “Above the Cliff” are the highest scores, including “My Sister”, and “My Sister” is scored in a balanced manner, and “Sweeping Darkness·Decisive Battle” scores in terms of freshness and ideological profundity. the first.

In addition, only two films, “Above the Cliff” and “My Sister” were screened in advance in the spring archives. “High quality + strong marketing” smoothly promoted the fermentation and spread of word-of-mouth, which effectively boosted film schedule and box office. “Good word-of-mouth evaluation” has become the most important factor driving movie viewing.

Solemnly declare: The purpose of this information released by Oriental Fortune.com is to spread more information and has nothing to do with this stand.