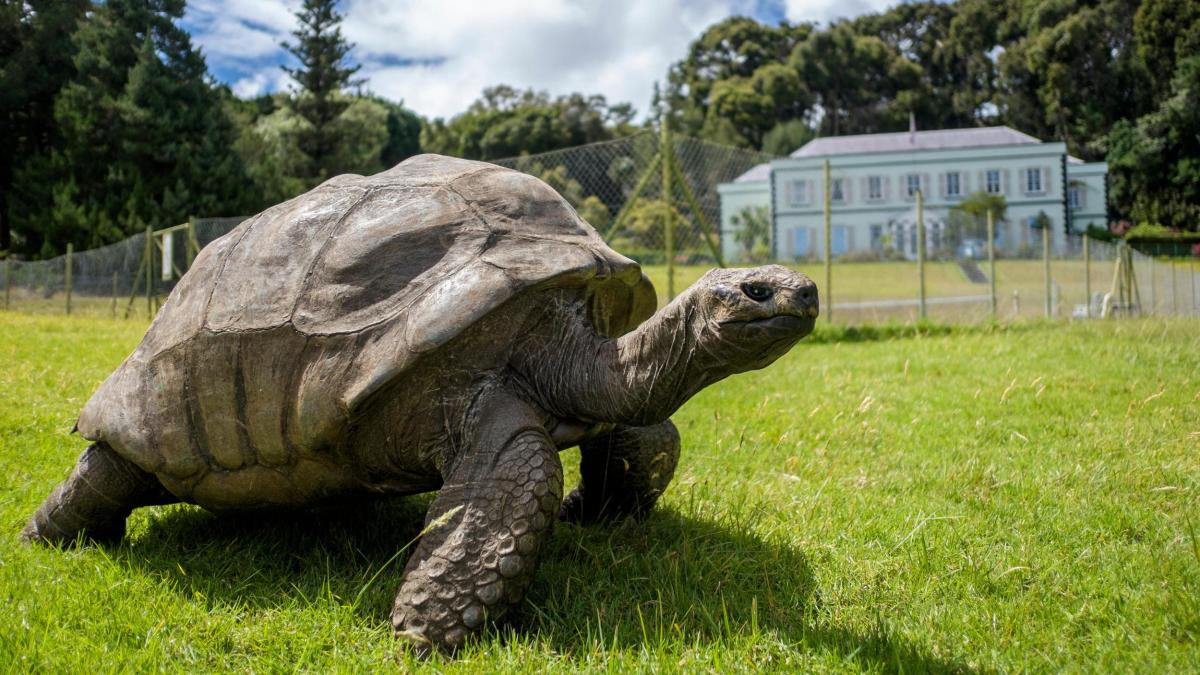 This giant tortoise is 190 years old

In 1882 Jonathan was brought from the Seychelles to St. Helena, and the turtle was probably around 50 years old at that time. In the past, other interesting residents also landed on the remote island in the South Atlantic.

MIn the middle of the South Atlantic lies one of the most isolated inhabited islands in the world: St. Helena. Together with Ascension and the Tristan da Cunha archipelago, it forms a British overseas territory. Not even 4,500 people live on St. Helena; the inhabitants are called saints.

The island was completely unknown for a long time, until the Portuguese João da Nova sighted it around 1502 on his way back from an expedition to India and named the volcanic island after St. Helena, whose name day falls on the day of discovery. Barely 100 years later, the Portuguese gave up St. Helena again; they were followed by the Dutch and finally in 1659 the British East India Company, which began to colonize the island according to plan.

In 1834 St. Helena became the property of the British Crown. The island is still popular with British tourists to this day. Empty beaches and clear Atlantic waters, the lush green landscapes and the cliffs make it an ideal, albeit extremely remote, outdoor destination.

She is by far the oldest resident of St. Helena: Jonathan, a Seychelles giant tortoise. It is estimated to be 190 years old, i.e. tanks. The animal can no longer see well due to its age, but is otherwise considered “alive and well”.

In 1882 Jonathan was brought to the island from the Seychelles; Based on old photos, scientists assume that the turtle on the crossing was already fully grown, i.e. about 50 years old. Jonathan received his name from the British governor himself in the 1930s. The obverse of the St. Helenas five pence coin features an image of Jonathan.

Although the then uninhabited St. Helena was discovered by Portuguese sailors around 1502, it was not until 1515 that the island received its first permanent resident: Don Fernando Lopez. However, the Portuguese soldier did not come voluntarily: he had previously been stationed in Goa, India, where he was punished with an arm amputation for treason.

On the way back to Portugal he was released on St. Helena. He was kept company by a rooster that had escaped from the ship. Passing seafarers were greeted loudly by the bird, and Lopez received plant seeds from the visitors, which ensured his food. In 2002 the island honored his fate with a special postage stamp. Lopez died on St. Helena in 1545 after a brief return to Europe.

A court for Napoleon Bonaparte in exile

He was the most famous islander: Napoleon Bonaparte. After the lost battle of Waterloo and his abdication as French emperor, Napoleon was brought to St. Helena in 1815 by order of the English and Prussian allies. At his residence in Longwood House, then the residence of the British governor, about two dozen French companions continued to play imperial court for Napoleon. After six years in exile, he died there in 1821.

One of the most expensive brewed drinks in the world

At 200 euros per pound, St. Helena coffee is one of the most expensive brewed drinks in the world: in 1733, the East India Company imported Green Tipped Bourbon Arabica coffee seeds to the island, where they thrived on the volcanic floor.

Napoleon was a big fan, he drank coffee every day in his island exile. But over time, flax became the main export good from St. Helena and coffee growing was therefore discontinued. Coffee bushes have only been grown again since 1994; Coffee now accounts for around 30 percent of the island’s export volume.

The island only got an airport in 2017

Just a few years ago, the journey to St. Helena took five days. The British mail ship “RMS St. Helena” went to the island every three weeks from Cape Town in South Africa. For 28 years, the ship delivered goods to the remote island, and locals and visitors could only arrive by sea – until 2017, when St. Helena got an airport.

This is how the American biologist Edward O. Wilson describes the flora and fauna of the island in his bestseller “The Diversity of Life”. Due to its ecological uniqueness, St. Helena is on the UNESCO World Heritage list.