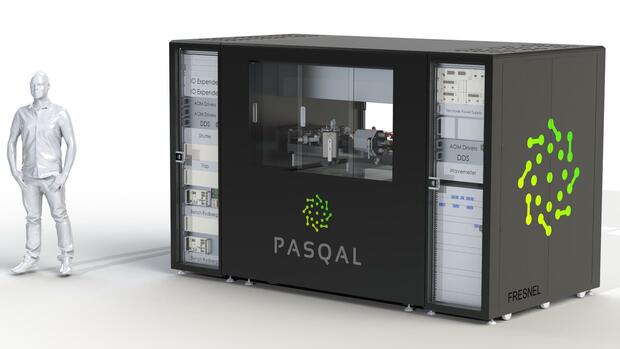 Paris Their names are Quandela, Pasqal or Alice & Bob: Various start-ups are currently working on creating the first real quantum computer. The developers of quantum computing are still at the beginning. But some French start-ups are already staking their claims quite successfully.

Georges-Olivier Reymond, founder and CEO of Pasqal, is ambitious. “We have 14 employees. We want to triple the number by the end of the year – and be around 100 by 2023, ”he says in a video interview with Handelsblatt. And for the more distant future he has very big goals: “In ten years we want to be a multi-party with thousands of employees. We have a very aggressive expansion strategy. “

Reymond’s company has existed since 2017 and, like most in the field of quantum technology, is a spin-off from a scientific institution. The Institut d’Optique is located thirty kilometers south of Paris in Saclay, the French cluster for cutting-edge technology.

Quantum computers are based on a theory by Nobel Prize winner Max Planck. He recognized that atoms do not continuously absorb or release radiation energy, but in the form of packets, so-called quanta. In doing so, he revolutionized the physical worldview of that time.

Computers based on Planck’s theory make use of a peculiarity of the smallest units, the quantum bits or QBits: They can assume different states at the same time. The bits of digital computers, on the other hand, only know the values ​​zero or one: A transistor either conducts current or it does not conduct it. Whether cell phone or supercomputer – even the most complicated applications are ultimately based on these two states.

Because QBits have several different states at the same time, their computing power is many times higher. “If you go from 50 to 51 QBits, the performance doubles, while an additional bit is negligible,” explains Tommaso Calarco. He heads the European Quantum Community Network and the Institute of Quantum Control at Forschungszentrum Jülich.

With the help of quantum computers, science and industry could possibly solve problems in the future where today’s computers still fail. They could be used for encryption or for the optimal use of a vehicle fleet.

Forschungszentrum Jülich has already bought two machines from Pasqal because the company is “the world market leader for atomic processors,” says Calarco. According to Calarco, the advantage of atom-based technology is that it is easily scalable and works at room temperature. The alternative with photons used by Google and a Chinese university, however, requires cooling to extremely low temperatures. “Nobody knows how to scale this huge refrigerator,” says Calarco.

The cooling reduces a major advantage of quantum technology: the lower power consumption. “A quantum machine needs around ten kilowatts, while a supercomputer of the same power needs around 1000 times more,” explains Reymond from Pasqal. That could be decisive one day, because digital systems already cause as many CO2 emissions as all air traffic.

Google and the Chinese university have already used quantum machines to do calculations that would have taken a supercomputer tens of thousands or millions of years. However, their machines are not programmable, they are set up for a single arithmetic operation.

“The race for the quantum computer is far from over, Europe is very well positioned,” says Calarco. The machines from Pasqal already have up to 150 QBits. The machines that will be delivered to Jülich at the end of the year – financed by the EU Commission as part of the “Quantum Flagship Initiative” – should have 200 to 300. For comparison: The variant used in China had 50 to 60 QBits.

“There is still a lot of work waiting for us”

Valérien Giesz from Quandela says: “The goal is to have a real quantum computer between 2030 and 2050.” Quandela also works “with photon Qbits that are more stable than others, but require very low temperatures”.

Quandela wants to have a so-called NISQ computer available in 2023, a “Noisy Intermediate-Scale Quantum” computer. “Noisy” stands for the susceptibility to errors that quantum machines still characterize today. You have to drive them out. “Science says: everything can be solved. The technology says: There is still a lot of work waiting for us, ”says Giesz with a smile.

In the race for the first real quantum computer, the French start-ups benefit from their close ties to top research institutions. In addition, France has very good mathematicians and physicists: In mathematics, the Saclay cluster is considered a world leader, in physics it is among the top European groups.

As the example of Jülich and Pasqal shows, in this case the Europeans seem to cooperate in an uncomplicated manner. “Italy and Spain are also involved in the EU initiative,” says Calarco happily.

“In France we are very good at hardware, together with Alice & Bob and Pasqal,” assesses Giesz. “We are weaker in the special software.” And he says that large companies in Germany want to work with Quandela: “For example, we were at Bosch, so we immediately talked about common interests.” In France, the relationships between the big players and traditionally more difficult for start-ups. “That is changing now, however. With Thales, Atos and Airbus we can cooperate well, Airbus supports us financially, ”says Giesz.

Start-ups are willing to cooperate

The quantum start-up Alice & Bob has specialized in self-correcting superconducting quantum bits. The company’s name comes from encryption, where people like to say “Alice” and “Bob” instead of “Person A” and “Person B”.

Sofia Dahoune from the specialized Elaia fund is convinced: “Start-ups like Alice & Bob combine the best of both worlds: proximity to research laboratories and the flexibility of start-ups.” Elaia is one of the investors in Alice & Bob.

Dahoune explains: “You work with five laboratories in Paris, Saclay and Lyon. The key to success is to stay very close to research. “

And so the young companies are initially willing to continue to cooperate. Pasqal boss Reymond emphasizes: “Nobody knows yet which technology will come out on top in the end. That’s why we are all interested in staying open and working together. “