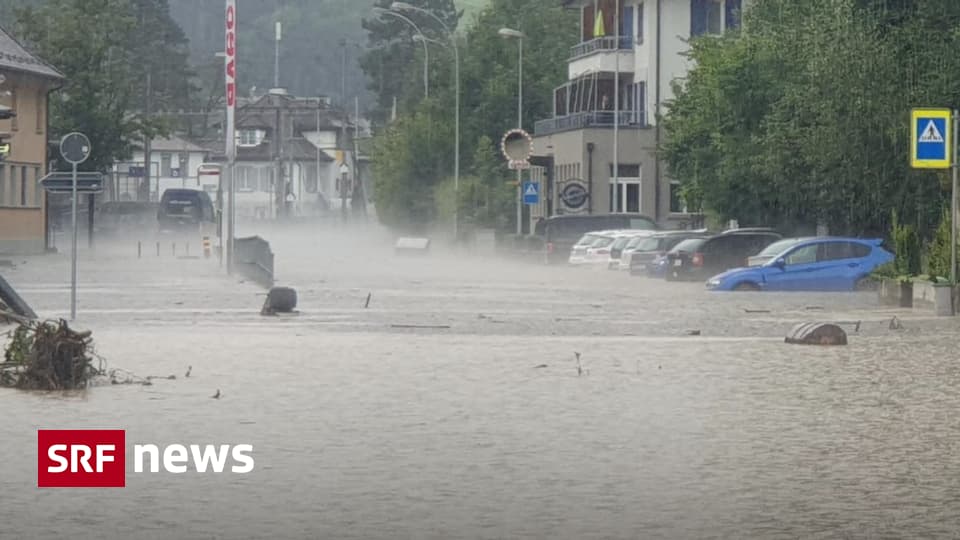 Due to the risk of flooding, the SBB interrupted the line between Schachen and Wolhusen LU on Sunday afternoon. The disruption lasted just under an hour. The Bern-Lucerne line was hardly open again when the rail traffic information reported new interruptions in central Switzerland.

Shortly after the all-clear on the Schachen-Wolhusen LU route, the railway interrupted traffic between Schachen and Entlebuch LU. The reason was a landslide. The Zug-Arth Goldau line was interrupted shortly before 2 p.m. between Zug and Walchwil ZG. From Lucerne in the direction of Arth-Goldau and vice versa, the SBB suspended traffic between Küssnacht am Rigi SZ and Meggen LU. At 2.30 p.m. the rail connection between Pfäffikon SZ and Ziegelbrücke GL met. These interruptions can also be traced back to storm damage. The duration could not be foreseen in the afternoon.

According to SRF Meteo, a hail cell moved at noon from the Napf area, just north of Lucerne and then reached the canton of Schwyz. It should move further east.

Road traffic is also affected by storms. There was flooding on the A2 at the Rotsee junction near Lucerne. And a lot of hail fell on the A3 between Lachen in the canton of Schwyz and Niederurnen.

One of the communities in the canton of Lucerne that was particularly hard hit by the storms is Wolhusen. At the Hotel Bad Wolhusen, the amount of water washed away cars. As mentioned above, the railway line was briefly interrupted due to a landslide.

The police in the canton of Schwyz and Lucerne received over 400 emergency calls by early afternoon. It was about water ingress in cellars, brooks overflowing their banks and flooded or blocked roads.

In the canton of Schwyz alone, there were 200 emergency calls, as the canton police announced. There are currently no reports of injuries.

The canton of Zug is also affected


Open the box
Close the box

The canton of Zug was also hit by the storms. According to the canton police, the strong thunderstorm would also have brought some hail showers. Within a short time, a number of cellars, underground garages and streets in the municipalities of Risch, Zug, Walchwil, Unterägeri and Oberägeri were under water. Some stretches of the road should have been temporarily closed due to the large amounts of water. The operations control center had received a total of around 140 reports.

The operations control center of the Lucerne police received over 210 incident reports between 12:00 p.m. and 3:00 p.m. There are currently 19 fire brigades in action in the canton. There were no reports of injured persons here either.

In the canton of St. Gallen, the fire brigades moved out around a dozen times on Saturday evening and Sunday because of flooded cellars, as a spokesman for the St. Gallen canton police told Keystone-SDA. In Gais (AR), too, ten cellars were filled with water. Furthermore, reports about flooded cellars have been received from Bühler (AR) and Trogen (AR).

In Appenzell, the fire brigade only emptied an underground car park. There were no major cases despite the record rainfall. No hail damage had been reported by Sunday morning.