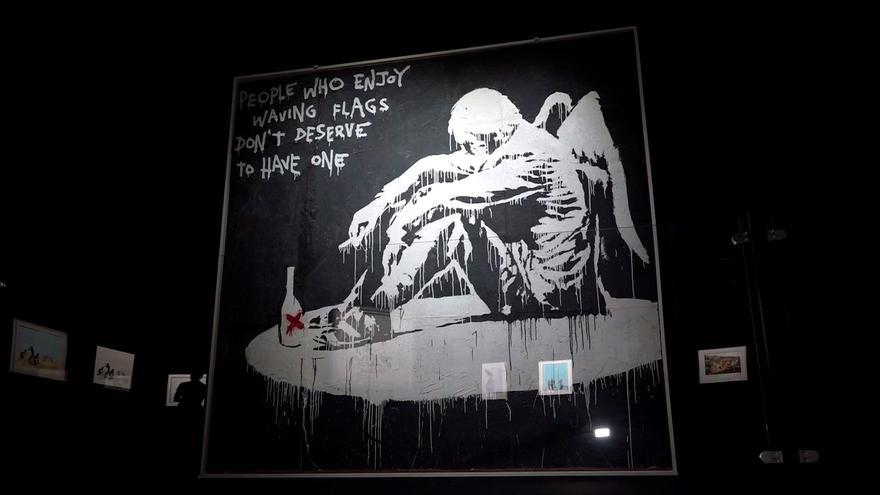 The exhibition ‘Banksy, Genius or Vandal?’ can already be seen in Brussels
EFE

“BanksyGenius or vandal?“is the question that the immersive exhibition about the artist which opens its doors in Brussels this Thursday and will try to reconcile the public with street art through an interactive journey.

The multimedia elements, the greatest novelty that this exhibition presents compared to others that have combined works by the British artist, play with music and audiovisual images that permeate the environment with a aura of rebellion and mystery, the same person who personifies the figure of the well-known graffiti artist, at the same time they seek to recreate the “street climate” that characterizes his work, according to Alexander Nachkebiya, curator of the exhibition, to Efe.

“Normally people who come to see the exhibition have no idea what street art is. They are people who come to see the works of art, and we try, putting the multimedia part at the beginning of the exhibition, to give them that feeling of street art ”, explains Nachkebiya in front of the work of ‘The Fallen Angel’, his favorite of the show . This iconic graffiti, which in the eyes of the curator represents a jaded guardian angel of society, is the “jewel in the crown” of the exhibition as it is the second time it has been exhibited to the public after passing through the Círculo de las Bellas Arts in Madrid, where it was exhibited for the first time.

Immerse yourself in Banksy’s critical vision

More of 70 works, authenticated and loaned by private collectors from all over the world, make up this exhibition, located in the central Brussels enclave of the Grand Place, which delves not only into Banksy’s artistic side, but also into his critique of consumer society and capitalism, trying to immerse the viewer almost in his mind.

The exhibition makes a balance between following a chronological and thematic narrative, starting – once the visitor is placed in the street universe thanks to an immersive experience that serves as the first contact with the exhibition – with a photographic series by Steve Lazarides, a friend of the artist, who portrayed a still very young Banksy who at that time was already trying to maintain anonymity showing only her blond hair.

Thus, the works accompany the evolution of his own art, from the practically unknown to the general public to the most notorious, once he rose to fame, such as ‘Girl with the balloon’ or ‘The flower thrower’ who could see for the first time in 2003 in Jerusalem.

‘Girl with a balloon’, one of Banksy’s most representative drawings EP

The entire room also plays a fundamental role in building that street story that you want to transmit, with ocher and grayish colored walls like concrete, which they try to transfer to those streets that have always been the blank canvas on which Banksy has developed his work. The desire to spread that feeling is such that even a piece of partition is exhibited with a drawing of a rat, one of the most iconic symbols of the British, keeping the exhibition its own space in which only samples about the animal are collected, such as the anarchist rat or ‘Love Rat’, who launch a message of revolution.

“If you feel dirty, insignificant, or involved, then rats are a good role model.. They exist without permission, they have no respect for the hierarchy of society and they have sex 50 times a day ”, he said in reference to these Banksy rodents, whose words are reflected on one of the walls of the room.

A virtual reality experience, which collects a large number of the works on display but embedding them in the streets of Bristol – the graffiti artist’s hometown – serve as the final icing on the cake for the exhibition that leaves open the question: is Banksy a genius or a vandal ? “We try not to give any value judgment. We simply try present your art in a way that people start to think (…) And decide based on their experience in the exhibition and not only by seeing them or in the newspapers or on the Internet ”, defends the curator.