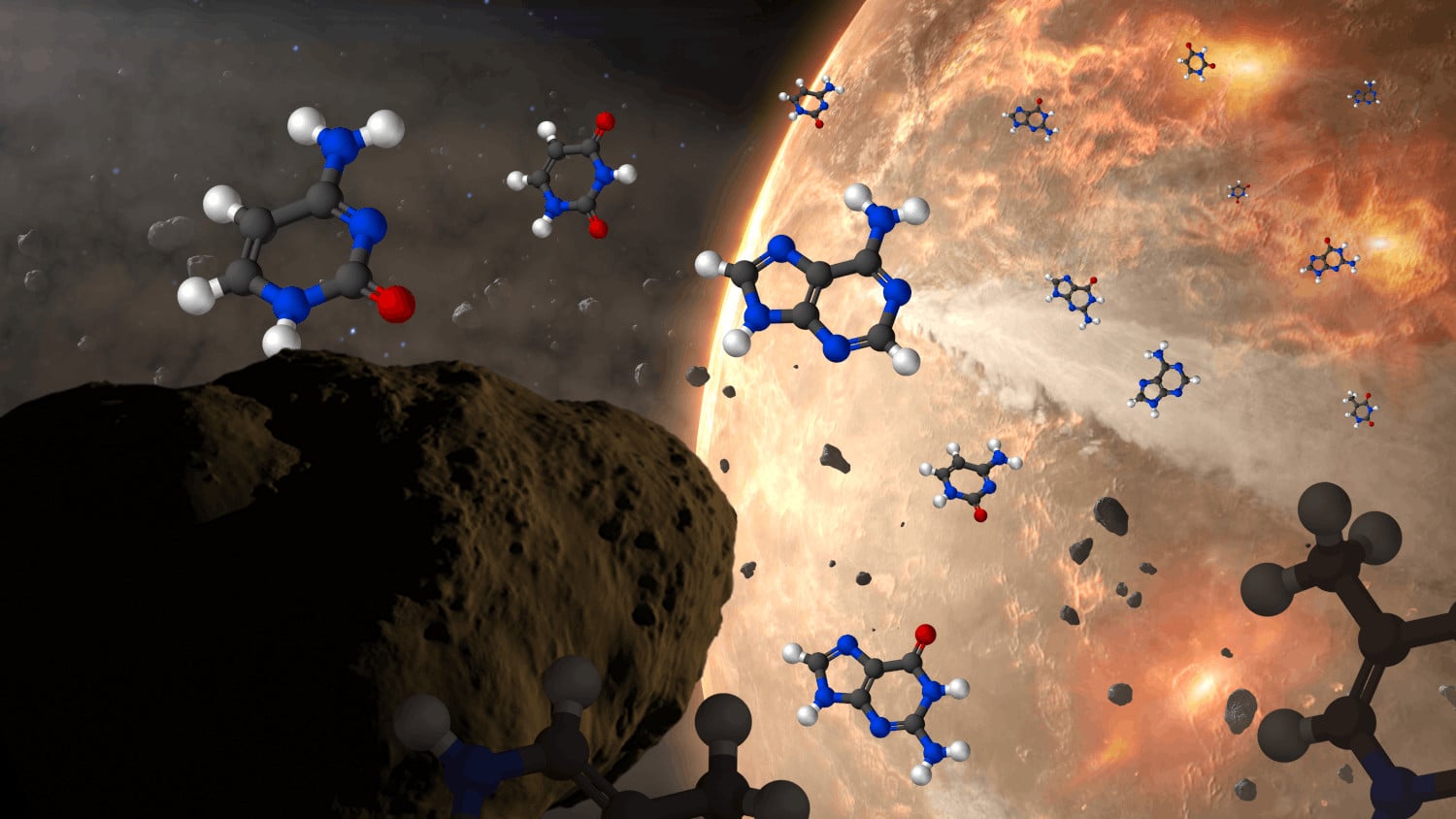 Our DNA and RNA are made up of five nitrogenous bases, which play a key role in the expression and transmission of genetic information. Combined with sugars (nucleosides) or phosphates (nucleotides), they are also involved in many metabolic processes. Researchers now claim that these bases — adenine, cytosine, guanine, thymine and uracil — have all been found in meteorite fragments. This discovery suggests that the precursors to life on Earth may have originated in space.

Recent sample return missions from the Ryugu (C-type) and Benu (B-type) asteroids, led by JAXA and NASA respectively, will provide important information on extraterrestrial organic molecules and potential clues regarding the origins of life on Earth. Indeed, these carbon-rich asteroids are plausible parent bodies of meteorites found on Earth, in which various primordial organic molecules had been detected in the early 1960s — including adenine and guanine, as well as traces of uracil.

Using a new analysis technique, which can more gently extract and separate different chemical compounds from liquefied meteorite dust, a team of Japanese researchers, also including two members of the Solar System Exploration Division of NASA, examined three carbonaceous meteorites that fell decades ago — including the Murchison meteorite, which fell in 1969 in Australia, famous for the many organic compounds it contains (including amino acids, purines and pyrimidines ). Their technique revealed the presence of all five nucleobases in all of the samples.

Nucleic bases and other compounds essential for life

The origins of life on Earth are still the subject of debate: are the primordial molecules the result of chemical processes that took place on Earth within a “prebiotic soup” or do they come from space ? The new study published in Nature Communications leans in favor of the second hypothesis: A diverse set of exogenous organic matter of meteorite origin, including nucleobases, may have been delivered to early Earth during the Late Heavy Bombardment Period (~4.0-3.8 billion years ago) write the researchers.

« Our detection method has a higher sensitivity of several orders of magnitude than that applied in previous studies. », said to ScienceNews Yasuhiro Oba, a geochemist at Hokkaido University, who led the study. Their goal was to measure the abundance of different nitrogen-containing heterocyclic molecules in each of these meteorites. Their extraction technique uses cold water instead of the hot formic acid usually used, which preserves these particularly fragile compounds.

Namely that there are two types of nucleobases in DNA and RNA: pyrimidine nucleobases, formed from a single heterocyclic nitrogen ring with six atoms (cytosine, uracil and thymine), and purine nucleobases , consisting of two rings with six and five atoms (adenine and guanine). Until now, only thymine and cytosine were missing from meteorite analyses.

Several purine nucleobases were identified in the two Murchison meteorite samples—guanine being generally the most abundant in all meteorites (except that from Tagish Lake). Various purine and pyrimidine molecules were also identified in the Tagish and Murray samples. Finally, the researchers detected and measured in the four samples the five nitrogenous bases, as well as several compounds related to these bases and some amino acids. They then undertook to carry out the same analyzes on the land where the meteorites were taken.

These results suggest that these compounds could have been deposited in the meteorites by terrestrial contamination. For the cosmochemist Michael Callahan, of the State University of Boise in Idaho, who did not participate in this study, the data are therefore not sufficiently convincing to affirm that the nucleobases are of extraterrestrial origin.

Oba and his colleagues point out, however, that they have identified other compounds that support their hypothesis. Indeed, they detected the presence of more than a dozen other compounds essential to life in meteorites, in particular isomers of the five nucleic bases. However, these isomers – which are compounds with the same chemical formula, but whose atoms are organized differently – are only found in meteorites, and not in the surrounding soil, which excludes the possibility of contamination by the soil.

The study of meteorites “at their source” will make it possible to definitively remove the doubt, which is why the team is currently applying its method of analysis to the samples from the asteroid Ryugu, brought back to Earth in December 2020 by the Hayabusa mission. 2; the return of samples from the asteroid Bénou as part of the OSIRIS-Rex mission is scheduled for September 2023. Scientists are delighted with the new clues that these extraterrestrial materials will bring. If the molecules that make up DNA do indeed come from outer space, it calls into question the potential distribution of life in our solar system and beyond.

tough forecast for the market