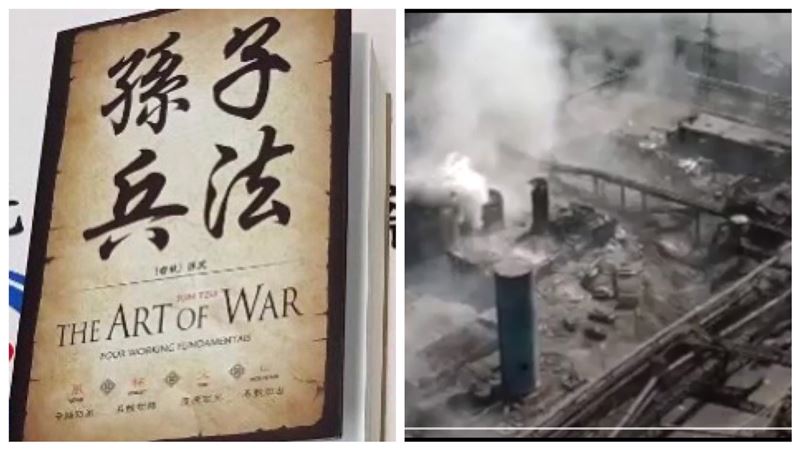 ▲ Russian media reported that the Russian army searched the items left by the Ukrainian defenders in the Azov Steel Plant, and a copy of “Sun Tzu’s Art of War” appeared. (Photo/Retrieved from the World Wide Web)

The Ukrainian government ordered the evacuation of thousands of Ukrainian soldiers from the Azovstal steel plant, the “strongest bunker” in the city of Mariupol, because “heroes have to live”. According to official Russian statistics, more than 1,700 Ukrainian troops have come out. It seems that there is no rush to hype up the propaganda, and the pro-Russian forces immediately invited a large number of reporters to visit the steel plant. A reporter from Russia’s Red Star TV found that the Chinese cover of “The Art of War” appeared in the items left by the Ukrainian army. When the film was released to China, netizens exclaimed excitedly. It is no wonder that the Ukrainian army can defend for 82 days. It is the ultimate weapon.

According to a comprehensive Chinese media report on the 19th, the Russian army opened up reporters to visit the Azov Steel Plant to get a glimpse of the lives of more than 2,000 Ukrainian defenders, including the Azov Battalion (AZOV) soldiers. When a reporter from Russia’s Red Star TV made a connection at the scene, they found that there were a lot of “furnitures” left by the Ukrainian army. One of them was particularly noticeable. It was a book titled “The Art of War of Sun Tzu” written in Chinese. “Interestingly, Ukrainian soldiers also read the Art of War.”

It turned out that the book “Sun Tzu’s Art of War” was a Ukrainian translation. In fact, it is also quite popular in Russia, so the reporter knew what it was when he saw it. According to a report by the Russian Satellite Network on April 21, the vice-chairman of the Russian Federation Security Council once publicly quoted a paragraph in “Sun Tzu’s Art of War”, “Therefore, the method of using the military can’t rely on it not to come, and rely on me to wait for it; If it doesn’t attack, it depends on what I can’t attack,” to explain why a special military operation against Ukraine was carried out.

▲The Ukrainian defenders who retreated from the Azov Steel Plant all need to go through security checks and open their luggage to check one by one. (Picture / Retrieved from the official community of the Russian Ministry of Defense, the same below)

The defenders of the Azov Iron and Steel Plant, who are called heroes all over the world, are actually watching China’s “The Art of War”, which makes Chinese netizens jump into the sky and shout that they have learned well. It turns out that the Ukrainian army can defend for 82 days by watching “The Art of War”. Sun Tzu’s Art of War, Chinese culture is extensive and profound, and everyone is learning. The “big fish” in Russia is actually this book.

However, there are also some netizens who are sour. Western countries cannot say that China has not helped Ukraine. Some netizens said that Sun Tzu said, “If you don’t fight, you will subdue your soldiers.” There are also many netizens who said that they only surrendered after learning “the best strategy”, but they were corrected by other netizens. “Thirty-six Strategies” and “Sun Tzu’s Art of War” are different books.

Park Min-ji, Doosan Match Play 3 consecutive wins and going to round of 16… Hae-ran Hae-ran and Park Hyun-kyung dropped out