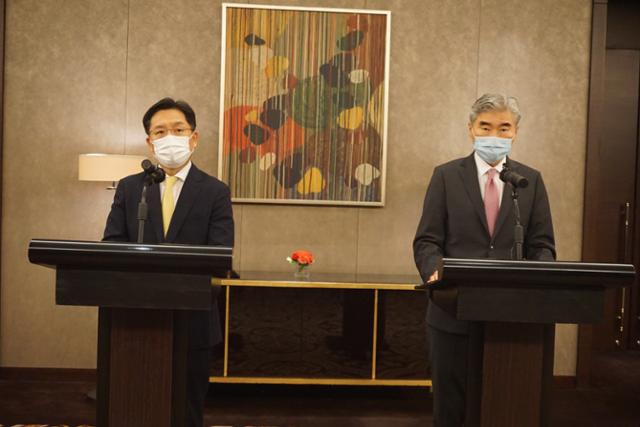 Noh Gyu-deok (left), head of the Korean Peninsula Peace Negotiation Headquarters at the Ministry of Foreign Affairs, explains the outcome of the consultation to reporters after meeting with US State Department special representative for North Korea Sung Kim in Jakarta, Indonesia, on the 30th. Jakarta = Correspondent Chan-Yoo Koh

The US State Department’s special representative for North Korea, Sung Kim, who is the chief representative for North Korea’s nuclear negotiation, said on the 30th that North Korea’s launch of a hypersonic missile (Hwasong-8) “is in violation of UN Security Council resolutions.” While emphasizing ‘diplomatic involvement’ with North Korea, he only repeated the principled position that “there is no hostile intention” in regard to the abandonment of the hostile policy that North Korea demands. North Korea-U.S. relations are running parallel to each other, as North Korean leader Kim Jong-un hints at the restoration of inter-Korean communication lines in early October.

“We shared deep concerns about North Korea’s missile launch,” Kim said in a meeting with reporters after an hour and twenty minutes meeting with Roh Gyu-deok, head of the Korean Peninsula Peace and Security Affairs Division at the Ministry of Foreign Affairs, in Jakarta, Indonesia on the same day. . “This is a violation of a number of UN Security Council resolutions and a threat to North Korea’s neighbors and the international community,” it said. In this regard, the United States convened an emergency meeting of the UN Security Council on September 30 (local time) to discuss the issue of North Korea’s hypersonic missile launch with Britain and France.

President Kim also emphasized the need for dialogue between the United States and North Korea. “We are seeking a path with South Korea toward complete denuclearization and a permanent peace regime on the Korean Peninsula,” he said. He also urged North Korea to respond to the humanitarian aid provided jointly by South Korea and the United States, saying, “We are ready to cooperate with North Korea in areas of humanitarian interest.”

“The ROK and the United States shared a comprehensive and in-depth evaluation of the recent situation on the Korean Peninsula, including the North’s discourses and speeches and missile launches,” said Roh. We agreed on that,” he said. 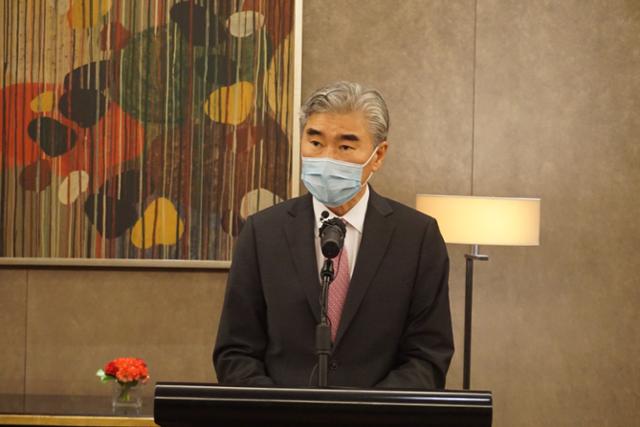 The meeting took place at a time when tensions on the Korean Peninsula over North Korea’s hypersonic missile launch and signs of resumption of inter-Korean dialogue were mixed. In particular, while Chairman Kim reached out to inter-Korean relations at the Supreme People’s Assembly the previous day, while keeping a distance from North Korea-U.S. relations, attention was drawn to the expression of the US position and change in attitude. President Kim repeated his position that “(the United States) has no hostile intentions” about North Korea’s position, and he did not give any particular position on any signs of resuming inter-Korean dialogue.

South Korea and the United States also exchanged views on President Moon Jae-in’s proposal for an end-of-war declaration. Director Roh said, “The president explained in detail the declaration of the end of the war proposed by the UN General Assembly,” and Kim said, “I have heard explanations from Director Roh. We have decided to continue close communication.”