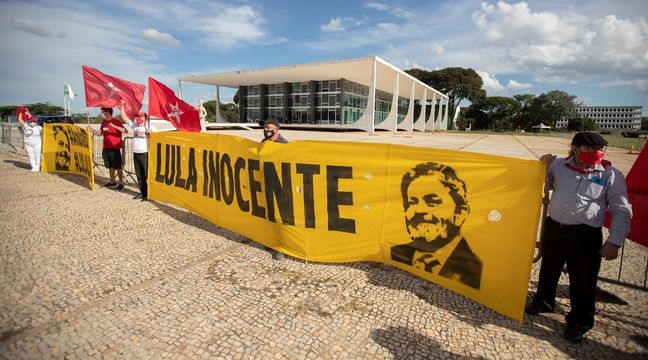 Bolsonaro versus Lula, we’re going straight ahead. The Supreme Court of Brazil on Thursday made a decision very favorable to Luiz Inacio Lula da Silva by confirming the annulment of the convictions for corruption of the former left-wing president, making him eligible for the presidential election of 2022. “With this decision of the Supreme Court, Lula is a candidate ”, reacted immediately the president of the extreme right Jair Bolsonaro, implying that the population should be worried for the“ future of Brazil ”if the icon of the left returned to power.

By a large majority of 8 against 3, the judges meeting in plenary session confirmed the decision of judge Edson Fachin, who had estimated at the beginning of March that the court of Curitiba (South) having condemned Lula in two trials was “not competent” . They therefore also confirmed de facto that the ex-president (2003-2010) had again become eligible for a third term and that he could face Jair Bolsonaro in next year’s poll. “If Lula comes back with the vote, all is well. But imagine what will be the future of Brazil with the type of people that it will bring with it to the government, “quipped President Bolsonaro during his weekly direct on Facebook.

Lula accuses Bolsonaro of “genocide” on the Covid-19

Lula, 75, has yet to officially confirm he will be a candidate, although he has repeatedly stated that he stands ready to return to the political arena when the time comes. But the clash of the titans against Jair Bolsonaro has already begun, the former left-wing president firing red bullets on the far-right president, whom he describes as “genocidal” because of his chaotic management of the epidemic of coronavirus, which has killed more than 365,000 in Brazil.

“The Supreme Court upheld Lula’s (political) rights. It is a historic day. It took a long time, but it happened, ”tweeted in the wake of Thursday’s judgment Gleisi Hoffmann, president of the Workers’ Party, co-founded by Lula in 1980.

Not cleared on the merits

The Supreme Court’s decision does not, however, exonerate the former trade unionist on the merits.

At a future session, the judges will have to decide whether to order the transfer of the case to a court in Brasilia or Sao Paulo. The 11 judges will also later decide whether Judge Sergio Moro, who sentenced Lula to prison in 2017, was “biased” and acted to the detriment of the former left-wing president. The second chamber of the Supreme Court had already leaned in this direction on March 23.

Lula was notably accused of having received bribes to favor construction companies in the awarding of public contracts, linked to the state oil company Petrobras, as part of the “Lavage express” investigation. . But he has always proclaimed his innocence and shouted a political plot to prevent him from running for the 2018 presidential election, ultimately won by Jair Bolsonaro. After being sentenced in the 2nd instance, in 2018, he was imprisoned for 18 months and forced to give up the presidential election of which he was the big favorite, according to the polls.