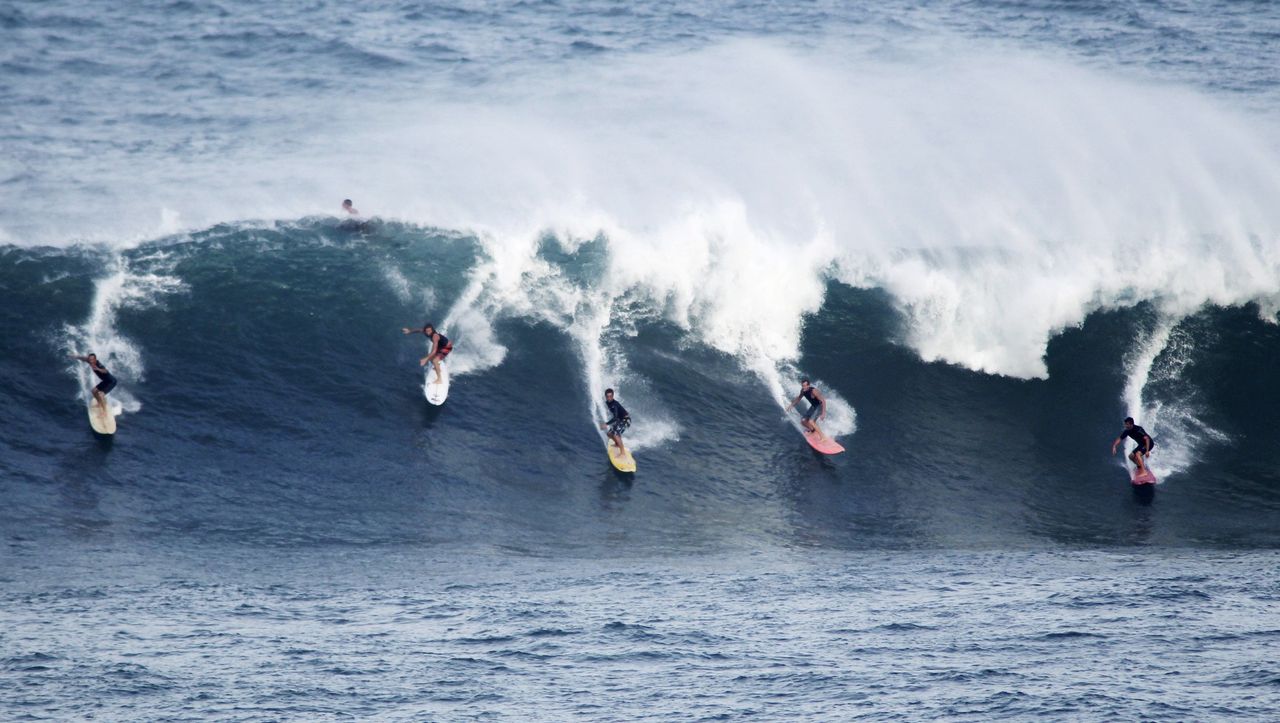 “Hey TJ, come over! The food is ready, it’s ready!” Makua Rothman stands in soaking wet shorts on a large veranda on the beach section “Pipeline” in the north of the island of O’ahu, Hawaii. Rothman’s voice sounds nasal, his typical Hawaiian singsong is reminiscent of a nursery rhyme. But the peaceful impression is deceptive: Rothman’s words on the beach, named after a famous wave, are not an invitation to dinner, but an invitation to fight. You apply TJ Barron as Rothman is an internationally known professional surfer. Barron collided with Rothman on the water, and he’s supposed to pay for it.

This exchange, which the author himself observed, has now been three years. That evening, Barron flees to his sponsor Billabong’s beach house. Later Makua’s father Eddie Rothman storms into the villa, in which Billabong’s marketing vice-president Graham Stapelberg also lives. Nobody dares to stop Eddie Rothman from beating Stapelberg up badly, JJ Baron is out of the house at the time. Rothman Sr. has been feared as the godfather of the Hawaiian surfing community since the 1970s. Stapelberg leaves the island the following morning – without reporting anything.

The Northshore on the largest Hawaiian island of O’ahu is made up of palm trees, white sand, blue water and perfect waves. The ideal setting for a surf competition. This is precisely why the ASP umbrella association celebrates the season finale of the world championship tour every year shortly before Christmas. This was also the case this year, when the Brazilian Gabriel Medina secured the title in the waves of Pipeline.

Here you can find more classics from the sports department.

But the idyllic facade is deceptive: the famous beaches are virtually unlawful – if you disregard the law of the thumb. Anyone who wants a piece of this paradise has to come to terms with the authorities of the local surfing scene, men like Eddie Rothman. Surf fashion giant Billabong felt that too. Not just because the Australian company’s marketing vice-president was beaten up in his home.

The company holds the naming rights to the season finale, the “Billabong Pipeline Masters”. But how much does the company really have to say about your own event? The 2011 contest was carried out in the three days after the fight, although better waves were announced for a later date. The rumor persists that the Billabong crew feared for their lives and therefore did not want to stay on site longer than necessary – even if the company denies it.

“The surfing industry is holding back the truth. It presents viewers with an illusion of the north shore: great waves and people enjoying themselves in them,” says Chas Smith, author of the novel “Welcome to Paradise – Now Go to Hell”. He sheds light on the balance of power in O’ahu’s surfing scene and calls the leaders of the gangs by name. There’s another side to Paradise, says Smith. “Hard drugs are ubiquitous, as is territorial violence. People get beaten up over trivialities.”

For Smith, the publication of his research means that he will no longer be able to return to the Northshore: “When I was writing it was clear that this would be my last winter in Hawaii. If I set foot on the island again, I will be knocked out. “

To avoid this fate, the international surf press has taken a vow of silence, believes Smith: “The surf magazines do not dare to publish the real stories, because then they would be excluded from Hawaii forever – which would mean bankruptcy.” Photos and videos of the famous Northshore waves are too important to be without them. The waves are the residents’ bargaining chip.

Rivalries with Australians and Californians

The fight against the supposed paternalism by strangers has a long tradition in the Hawaiian surfing scene. After white missionaries wanted to ban traditional surfing in the early 20th century, the sport became the epitome of Hawaiian culture. After the surf boom in the early 1960s, more Australians and Californians visited the Northshore every year, and the first rivalries with local surfers broke out. In the 1970s the local group “Da Hui O He’e Nalu” was formed, which in the winter of 1976 forcibly expelled all Australian professionals from the island. It was years before the Australians dared to return to O’ahu.

One of the founders of “Da Hui” was Eddie Rothman, who still heads the gang today. If ASP wants to host competitions on the Northshore, he has to negotiate with Rothman. The fact that he claims to be an advocate of Hawaiian values ​​seems a little strange in view of his vita: The 65-year-old had only emigrated from the mainland to the island at the end of the sixties. After just a few years he was one of the defining figures on the Northshore scene – a status that he still holds thanks to his reputation as a cold-blooded thug.

“This is the Wild West. What do you want to do? Call the cops? Have you seen any here?” Nathan Fletcher raises his eyebrows questioningly. He is one of the stars of the big wave scene and belongs to the hard core of the Northshore. In contrast to the capital Honolulu, patrol cars are actually not to be found on the north coast. “The locals do things their own way here – and it works pretty well,” says Fletcher.

The German surfer Nic von Rupp experienced that the unwritten laws of the Northshore even apply in official competitions: “In the contests in Hawaii things run differently than in the rest of the world. It is the locals’ turn first. I only take the waves that no one else does.” want.”

“Every professional surfer can tell stories like that,” says author Smith. “If you want to make a career as a surfer, you have to come to Hawaii because this is where the best waves are. But this paradise has its own rules.”