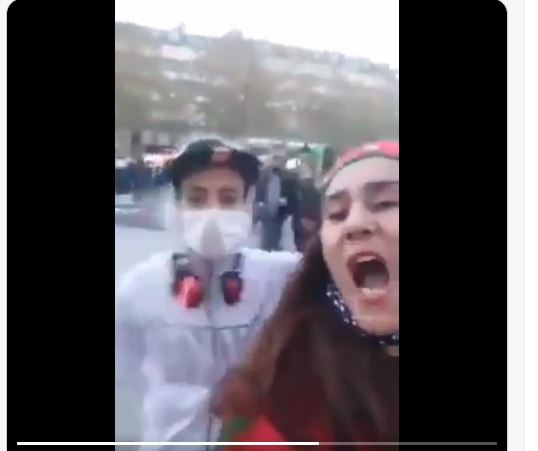 A Moroccan woman, who took part on Saturday at Place de la République in Paris, to proclaim the Moroccanness of the Sahara, did not give up in the face of the Polisario mercenaries and their supporters who tried to intimidate her.

Surrounded and harassed by mercenaries from the Polisario, this Moroccan mother of a family, showed courage, not letting herself be impressed by their intimidation and their threats.

The cowards, all against our sister, support this courageous woman who defends with dignity and intensity the love for our great MOROCCO ✨✨✨✨✨✨✨ pic.twitter.com/9bOMxQFZuf

Members of the Moroccan community established in France demonstrated peacefully in support of the Moroccan character of the Sahara and the Kingdom’s initiative to restore free movement in El Guerguerat.

Waving flags of the self-proclaimed “republic” of Tindouf and Algeria, bands of the Polisario and their supporters, provided with sticks ”, entered the rally using force and violence against demonstrators, especially women.

During this gathering, Moroccans in France praised the Kingdom’s just and courageous decision which made it possible to free the movement of people and goods and to restore order and security in this strategic area.

Singing the national anthem and patriotic songs, they also denounced the recurring maneuvers of the Polisario separatists and their acolytes aimed at undermining the stability and security of the Kingdom.