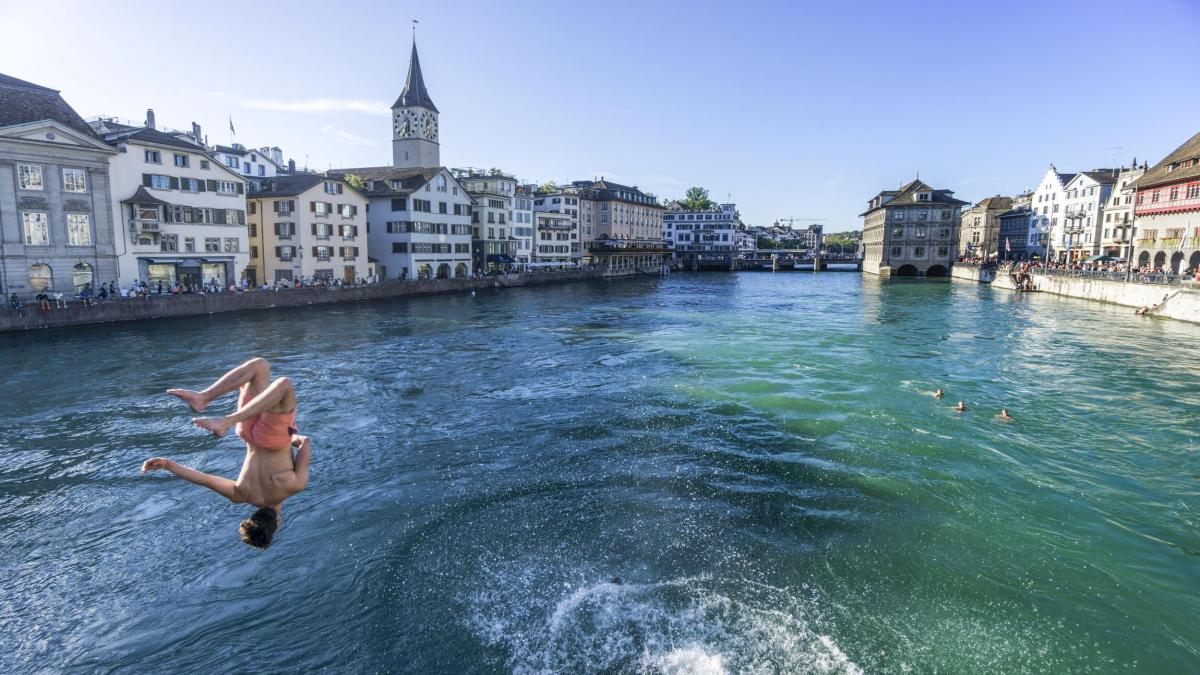 DSo cruise on the Quaibrücke between Bürkliplatz and Bellevue, on the northern tip of Lake Zurich: lots of Bentleys, Ferraris and Maseratis, also in the convertible version. Zurich is an expensive place to be. You can already sense it in the face of such parades of noble brass.

According to “The Economist”, Zurich, along with Paris and Hong Kong, tops the list of the most expensive cities in the world. And the Swiss “Tagesanzeiger” found out that nowhere is a hamburger menu in a fast food restaurant more expensive than in Zurich. It costs 13 francs, which is the equivalent of around 12 euros. Quite a lot of “Stutz”, as the franc is called in Swiss German.

And what if you don’t have that much stub in your travel budget? Can you spend a few nice days in Zurich, even if you are careful with your money? This summer is a good opportunity to try it out. Because Zurich is particularly cheap right now – like this:

You can save a lot on hotel accommodation until the end of August. The so-called “Zurich Weeks” under the motto “Crazy Prices” come in four categories. In the cheapest, you pay 499 francs (455 euros) for four nights for two in a hotel room – with breakfast.

This is really almost crazy for Zurich. After all, a single overnight stay for two people in Zurich’s youth hostel costs 90 francs (82 euros), four nights that is 360 Stutz – and that in a dormitory.

“With the summer campaign, we are addressing short vacationers from nearby countries. The campaign is one of the measures that is intended to fuel the upswing, ”says Martin Sturzenegger, Director of Zurich Tourism. The hotel industry was up to its necks. Compared to other large Swiss cities, Zurich suffered the greatest losses in terms of overnight stays in 2020.

Because not only tourists but also business travelers stayed away due to the pandemic, a decrease of 69 percent was recorded. The room occupancy fell from 75 percent in the previous year to 28 percent. This spring it was only around a fifth (21 percent). The historical discounts on accommodation are an important factor in making your stay in Zurich as cheap as possible.

With the Zürich Card to the museum for free

For cultural enjoyment and being out and about, we recommend the for days in the city on the Limmat “Zurich Card”. You can buy it for the equivalent of just under 50 euros via the “Zürich City Guide” app. A QR code that is shown serves as proof – for example in the bus, train or tram.

All public transport can be used for three days – including excursion boats for river tours on the Limmat and the cable car for excursions to the Felsenegg lookout point with a beautiful panoramic view at 810 meters. If you arrive by plane, you can travel free of charge from the airport to the city center.

Some guided city tours, on foot or by e-bike, are cheaper, but above all there is a large number of museums that offer discounts on presentation of the Zurich Card. You save 30 percent when you visit the FIFA World Football Museums (Regular admission: just under 22 euros) – the world football association is based in the city.

Visiting the Museum of Design (regular 11 euros) in a listed building from the 1930s that is well worth seeing. The 12 francs (11 euros) otherwise charged at the gate to the Le Corbusier pavilion on Lake Zurich can also be kept in the travel fund. The colorfully planked building is the last completed work by the Swiss-French architect, made primarily of glass and steel in 1967.

From there it is around 40 minutes on foot around the northern tip of Lake Zurich to the next cultural institution, which is located in a large park Rietberg Museum (regular 13 euros). The collections, which are spread over three villas and can be admired free of charge, include treasures from Asia, Africa, America and Oceania; it is the only museum for non-European culture in Switzerland.

Employees of the museum café pack picnic baskets to order for a leisurely afternoon in the park – not free of charge, but still cheaper than many visits to cafés or restaurants at the equivalent of 45 euros for two.

By bike to works of art in the city

On a stroll through Zurich, visitors can discover more than 1,300 works of art in public spaces. A rental bike that costs nothing during the day even without the Zürich Card is worthwhile.

City bikes and children’s bikes are available for a deposit (around 18 euros) at three central locations (Velostation Hauptbahnhof at Europaplatz, Pestalozziwiese on Bahnhofstrasse and Bellevue; stadt-zuerich.ch), which open at 9 a.m. at the earliest (until 9.30 p.m.). However, if you want to make a reservation, you pay 9 euros per bike; E-bikes and cargo bikes can be borrowed for a good 18 euros.

The works of art cannot be overlooked in the saddle – including the five-meter tall “Anne-Sophie” by artist Alex Hanimann. The chrome steel sculpture made of 700 metal sheets stands in front of the “25hours Hotel” at Pfingstweidstrasse 102.

Another gigantic sculpture awaits just three minutes away by bike, also award-winning: the concrete block “No Problem” by artist Not Vital in front of the “Renaissance Hotel” at Turbinenstrasse 20.

On to the police: in 1923 the famous Swiss artist Augusto Giacometti painted ceilings and vaults in the entrance area of ​​the regional guard with floral ornaments. The Zurich police station is therefore called the “Bluemlihalle”. Should be seen – for free -!

The traces that British street artist Ben Wilson has left in several places here in Zurich are just as colorful, but tiny. His special trademark: He paints chewing gum that has been spat out and kicked out in public spaces. Two of these miniatures are stuck on the steps of the Freitag Tower in the industrial quarter.

The ascent to the container-built tower with viewing platform is also free of charge – the view over the city to the mountains is included.

If you look down from the Freitag Tower, you see a semi-overgrown area, it seems. But it is a cultivated area: “Mrs. Gerold’s Garden” is a kind of beer garden with hipster aspirations, a feel-good oasis in an industrial setting. The counter in a milled shipping container, you sit on beer benches, under umbrellas, or on sheepskins when the brazier burns in the evening.

The garden restaurant offers good cuisine at reasonable prices, so a local specialty should not be missing on the travel menu: “Züri-Gschnätzlets”. In the garden restaurant, the typical veal strips with hash browns cost a good 20 euros. In other pubs in less hidden places in the city you often pay twice as much.

Zurich is known for its bathing culture. People swim in the Limmat and Lake Zurich, where public bathing establishments were built in the 19th century – back then as a replacement for private bathrooms, which were hardly available in apartments. Every Zurich citizen still swears by “his Badi” today.

The city heavily subsidizes the entry of the two dozen bathing establishments, some of which are free of charge. Some lie down on the Landiwiese behind the Mythenquai lido on the lake, others on the plank terraces on the Limmat, be it at the Upper Letten or Lower Letten river baths.

By the way: swimming and picnicking is a great combination in Zurich – for example in Wipkingerpark. There the river bank is lined with wide concrete stairs, there are shady spots under trees and popular picnic tables. Guaranteed free for everyone, if the weather is right, there is an extra-beautiful sunset!

Getting there: By train: There are more than 20 direct connections from Germany to Zurich every day. With the saver price Europe from all over Germany from 37.90 euros to Zurich, routes close to the border from 18.90 euros, e.g. from Singen am Hohentwiel and from Munich to Zurich (bahn.de).

By car: Via the A5 via Mannheim and Freiburg. From the border crossing near Basel there are still 80 kilometers on the Swiss A3 motorway. Or via Schaffhausen and from there via the Swiss A4 motorway to Zurich. Without vignette via the German federal highway B27 and the Swiss main road 4.

By bike: The Rhine Cycle Route No. 15 leads past Zurich – perfect for a stopover.

Covid-19: Since June 26th there are almost no more restrictions. Clubs and water parks are now also open. No mask requirement inside for vaccinated people, outside anyway.

What is there cheap: Overnight packages are available from the equivalent of 450 euros – four nights for two people in a double room with breakfast. More examples under: zuerich.com/de/zuerichwochen. The complete overview with discounts and free tips at zuerich.com/de/besuchen/zuerich-gratis-erleben

The special tip: All wells in the city center have drinking water.

Participation in the trip was supported by Zurich Tourism. Our standards of transparency and journalistic independence under: axelspringer.de/unabhaengigkeit.