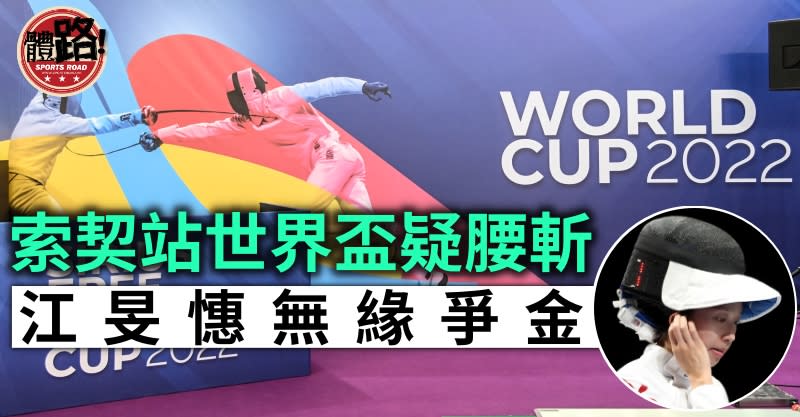 [Sports Road News]The Women’s Epee World Cup in Sochi, Russia, which started amid the controversy, after more than 20 players withdrew from the main match on Saturday, the final four were decided, but the event has not yet started. Members of the Hong Kong team responded to the inquiries, saying that the event was suspected to be cut in half, and they were waiting for the International Fencing Federation (FIE) to make a final decision, which meant that Hong Kong general Jiang Minxun, who had advanced to the top four, could not compete for the medal.

The Russian army has attacked Ukraine for several days. Although the Women’s World Cup held in Sochi will be held on Friday as usual, the group stage and preliminaries will be staged. However, due to the tension between Ukraine and Russia, the number of participants has dropped significantly. Only 101 swordsmen competed in this station. The number of participants 170 fewer people than the Barcelona branch in mid-month. The main competition started on Saturday, and as many as 13 Swiss, German, Italian and Estonian swordsmen have withdrawn from the top 64, making some swordsmen advance without a fight. In the next stage of the knockout stage, more than 20 people withdrew in total, and even when the competition reached the top 16, one of the Russian swordsmen had already won the top 4 place two rounds earlier when all the opponents in the same region of the promotion table withdrew from the competition.

The final 4 finalists were decided, 3 of them were Russian swordsmen, and the other top 4 swordsman was Jiang Min-he, who won 4 consecutive knockout rounds. It is also the place where Hong Kong will lock the World Cup medals again after May 2019. . However, after the top 4 finalists were decided at 11:00 p.m. Hong Kong time on Saturday, the tournament has not been updated, and the original webcast page has not been broadcast live. Afterwards, members of the Women’s Heavy Hong Kong team pointed out that the competition was decided to be cut in half, and the competition was waiting for the FIE to make a final decision. It is worth mentioning that the current chairman of the FIE is Russian businessman Alisher Usmanov, who is a former fencer and one of the two major shareholders of the Premier League club Arsenal.

In addition, the competition will also update the original schedule of the Sunday team competition after the top 4 individual competitions are released. After multiple teams withdraw from the competition, there are only 6 teams remaining in the team competition table, namely South Korea, Japan, Hungary, Hong Kong, Romania and the host. Russia. South Korea and Russia are listed as the No. 1 and No. 2 seeds respectively. The top 8 will be directly qualified for the top four by a bye, and the remaining four teams will compete for the other two top four seats. The Hong Kong team was listed as the No. 3 seed and was scheduled to compete with Romania for the top four.