An argument between El Othmani and the Moroccan Minister of Justice over alcohol, hashish, and “Toto” behavior

Al-Marsad newspaper: The former Moroccan prime minister, Saad Eddine El Othmani, criticized the Minister of Justice and Secretary General of the “Authenticity and Modernity” Party, Abdellatif Wehbe, for defending the actions of rapper “Toto” after he appeared carrying a bottle of alcohol.

“It is unacceptable for a government official to defend smoking hashish and drinking alcohol at festivals in public squares, and justifying that by having followers,” El Othmani said in a tweet posted on his Twitter account.

And he continued, “Those behaviors include publicizing what is forbidden and forbidden by law, morals and custom, and what is legally criminal, and a salute to the free voices that criticized this.”

The Minister of Justice, Abdellatif Wehbe, had called on Moroccans to apologize to the singer “Toto”, after harsh criticism was directed at him after he appeared carrying a bottle of alcohol at an art festival, in addition to his slanderous expressions.

discomfort during a speech by Joe Biden, the president addresses a deceased parliamentarian

“Where’s Jackie?” asked the 79-year-old Democrat during a speech dedicated to the fight against obesity and food insecurity.

“I want to thank everyone who is here,” said Joe Biden, mentioning two other parliamentarians particularly involved in these subjects, a Republican and a Democrat.

In the process, he seemed to look in the room for former member of the House of Representatives Jackie Walorski, an elected Republican from Indiana who died in early August in a car accident, who was very committed to the fight against malnutrition.

The elected official had actively contributed to the preparation of a major summit devoted to this problem, during which Joe Biden spoke on Wednesday.

The White House had published a press release after his death in which the American president said he was “shocked and saddened”.

Bombarded with questions about this on Wednesday to find out if Joe Biden had forgotten that the parliamentarian was dead, White House spokeswoman Karine Jean-Pierre did not really answer.

“He thought very strongly of her” during this event to which she had actively contributed, only said the spokesperson.

“I don’t find it disturbing,” she said again to the journalists who insisted.

Karine Jean-Pierre added that Joe Biden had already planned to meet the family of the deceased parliamentarian on Friday, on the occasion of the signing of a law, to pay tribute to his “remarkable” fight against malnutrition. .

A new relationship between Ilham Al-Fadala and Haya Al-Shuaibi.. and the latter: she buys counterfeit goods from Turkey and suggests to her followers that it is original!

Al-Marsad newspaper: A war of words erupted on social networks again between the two Kuwaiti artists, Ilham Al-Fadala and Haya Al-Shuaibi, after the latter entered the Kingdom.

And Al-Shuaibi said during a video: “God suffices for those who wronged me and was the reason for keeping me away from you for this period, and if I am wrong about anyone, Hayuna tells you that she loves you, and apologizes from her heart if there is something wrong with it.”

And she continued, “I am complaining about what it usually means.” In reference to the inspiration of virtue.

Al-Shuaibi accused Al-Fadala of cheating her audience, saying: “She buys counterfeit goods from Turkey and suggests to her followers that it is authentic.”

Al-Fadala replied: “Now, the fake accounts, how many people can equal two three fives? Not a million people showered! My work and my work, if I had not oppressed her and upset her from what I heard today, nor would I have come to speak.”

And she continued: “But you accuse my friend who visited me and accuse her of being strange, why is she wearing a veil, the niqab has become strange? If you don’t respect me and know what you respect me, respect the guest dashboard, Dirtje, strangeness, strangeness and insults in it and the smell of her monastery, respect her at least, but only halal girl.”

And Ilham Al-Fadala concluded by saying: “Even the journalist’s predecessor, which I settled with, I have the messages and the words that I wrote and I have everything. 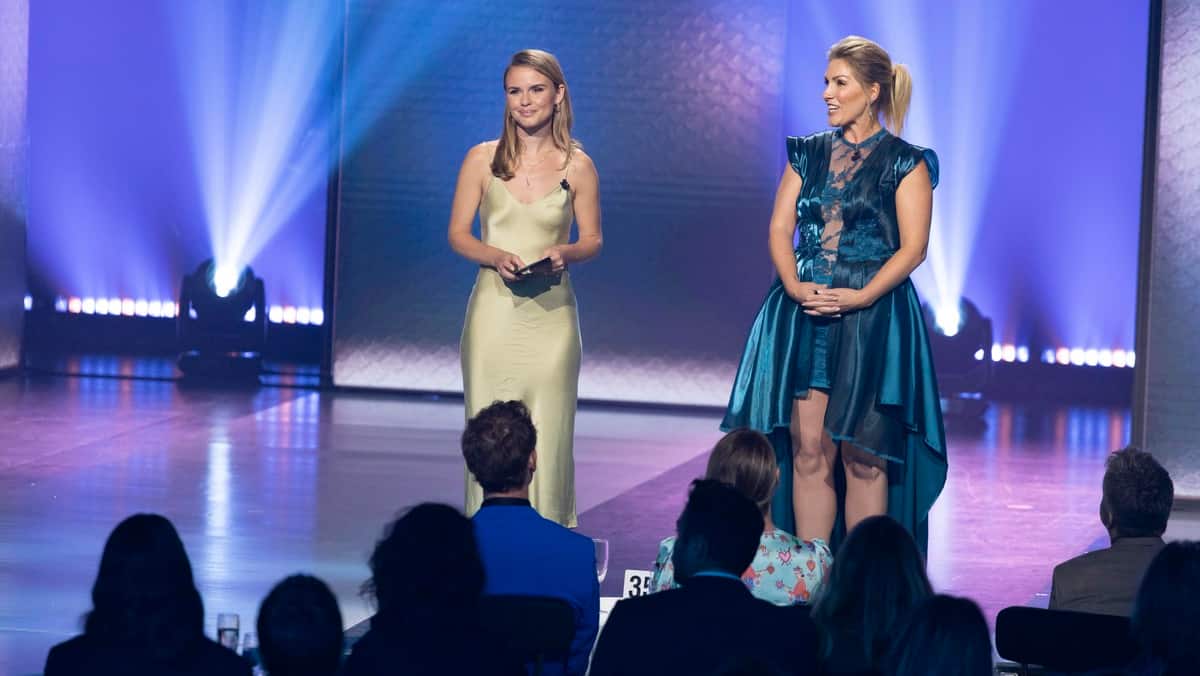 The author and documentary filmmaker Léa Clermont-Dion denounces the uncomfortable intervention of Guillaume Lemay-Thivierge, who went on stage during the Gala des prix Gémeaux, Sunday evening, to send a somewhat disjointed message.

On Facebook, the one behind the documentary I salute you bitch – misogyny in the digital age returns to the controversy.

“I respect the debate, but I found it a shame, because we were FINALLY highlighting the tremendous work of shadow documentarians having a real impact in Quebec society,” she wrote in a message published Monday. morning.

In her Facebook post, she took the opportunity to mention “in principle” the documentary productions awarded by the Académie des Gémeaux “which should have been celebrated” if Guillaume Lemay-Thivierge had not interrupted the televised gala.

Recall that the actor and host burst onto the scene, while Véronique Cloutier launched a segment devoted to documentaries. GLT first talked about the importance of going to vote in provincial elections, before talking about the Gemini Academy. He finally returned to covert words on the vaccine controversy that targeted him last year.

“It’s important to vote with your heart. To take your time to look at everything carefully before choosing…”, he launched on stage.

“Thank you, Guillaume, for this message “from the heart”. OK, I was going to tell you that I had been involved in documentaries for a while and all that. I had a good joke, fak we are going to scrap that”, chained Véronique Cloutier.

The host then gave way to Léa Clermont-Dion and Ingrid Falaise, who had been chosen to present the Prize for Best Drama Series.

Directing his speech to Al-Sarami, Khaled Al-Badr said: “There is no comparison between you and Majid Abdullah. Your history and Majid’s history is not in comparison.”

Al-Sarami replied, “I am better than him.. Al-Bareh says that you are a family, and today you are a Nasrawi.”

There is no comparison between you and “Majid Abdullah”..

I am better than him .. Yesterday you say that you are a family and today you are a Nasrawi!

The one who threatens me has not lived • Al-Marsad newspaper

Al-Marsad Newspaper: An argument erupted between sports writer Sami Al-Qurashi and Al-Nasrawi sports analyst Abdulaziz Al-Muraisel because of the latter’s support for Al-Ahly club president Majid Al-Nafi’i, who many Al-Ahly fans are calling for his dismissal due to the deteriorating conditions of the club and the decline in its level.

Sami Al-Qurashi said, addressing a conversation to the messenger: There is no objection to Al-Ahly’s love, this is a right for everyone, but the recommendation of a president who reached Al-Ahly’s relegation by saying you are sympathetic to him and confident in his work.

He added: “Independent and not like anyone else.. We told you not to interfere in Al-Ahly affairs and support a president who reached Al-Ahly for the relegation centers, but you are Egypt.. Yes, you are an opponent of a large segment of Al-Ahly’s fans and I am with them. The demand that you not interfere in what does not concern you has become a threat, so let it be a threat.”

The reporter replied: “No one threatens me, Abu Khaled, and my talk to you is due to my appreciation for you and your friendship, but for the matter to reach the threat, this is rejected. .

Al-Mourisel continued: “The one who threatens me has not lived, and if the invitation is a threat, then I am for it.” Al-Qurashi replied: “Welcome to the Maqroma party, and I am for you an oven and oil.”