“Tyson” reveals new developments regarding his illness, and the secret of his appearance in a wheelchair at an airport

Translation exclusiveBoxing champion Mike Tyson said sciatica was the reason he was filmed in a wheelchair last month.

Mike Tyson revealed that he suffers from a rare health condition called sciatica, after pictures surfaced showing the former heavyweight champion in a wheelchair.

Concerns about Tyson’s health escalated last month when photos from an airport showed he was seated in a wheelchair while also holding a cane.

“I’m great now, everyone in my house is really lucky and we’re all so grateful for everything we have,” Tyson said.

The condition affects the nerve endings in the body, and Tyson appears to be suffering from complications related to his back.

After 4 people were killed in Tripoli, Mikati moves and an urgent decision from Mawlawi

Prime Minister Najib Mikati followed up on the unfortunate incident that took place in Tripoli today, which resulted in the death of four people.
He made a series of contacts with Interior Minister Bassam Mawlawi, army commander General Joseph Aoun and security leaders, and stressed “the need to control the situation and increase security measures and not allow anyone to tamper with the security of Tripoli and the safety of its people.”
Following the armed robbery that took place in the evening, the Minister of Interior and Municipalities Judge Bassam Mawlawi called the Director General of the Internal Security Forces, Major General Imad Othman, to intervene immediately to control the situation in order to preserve the security of the city and its people.
Immediately, the security forces patrolled and set up fixed and mobile checkpoints and checks in the vicinity of the site, which witnessed tensions as a result of the incident.
Mawlawi stressed the need to maintain security and order, noting that a meeting of the Central Internal Security Council will bring together all security leaders to develop a security plan in light of recent events.
September 9, 2022 0 comment
0 FacebookTwitterEmail

Watch .. a Belgian magician amazes the audience and makes a “paper ball” move and interact with him and crown the world championship of magic

Al-Marsad Newspaper – Agencies: Belgian Laurent Peron turned a simple paper in the form of a small ball into a lively and naughty character, moving, jumping, dancing and hiding, an art he learned on the street.

And Peron managed with this kind of magic to be crowned at the end of last July in the Canadian province of Quebec, the world champion in magic.

On July 30, Perón led the way over a hundred magicians he competed with in the Triennial World Championships, as the creator of the eight-minute Paper Ball won first prize in the General Magic category and the grand prize.

“A lot of old magicians came to meet me after my show and told me that they went back to childhood and forgot the techniques. That’s what we wanted with this paper ball. We don’t care about special effects, because The goal is magical feelings.”

On his return to Belgium, he found on his phone a congratulatory message from American magician David Copperfield, who had passed through the Wall of China and made the Statue of Liberty disappear.

Disclosure of the nature of “Tyson’s disease”, which forced him to sit in a wheelchair

These pictures raised questions about the nature of Tyson’s disease, especially after he appeared while he was sitting in a wheelchair and holding a crutch in his hand.

And American media revealed the nature of the disease that “Tyson” suffers from, noting that he suffers from “sciatica” in his lower back, a problem that forced him almost two years ago to stay in bed for weeks.

And Tyson, weeks ago, aroused the sympathy of his fans when he said that he felt that he “will die soon,” explaining that “money means nothing to him.”

It is noteworthy that the same problem afflicted the boxing champion at the end of his professional career, and was one of the reasons that forced him to retire 17 years ago.

For smart people only.. Can you move just one pencil to reverse the order of the pens in 20 seconds?

Al-Marsad newspaper: The Sun newspaper published a new riddle classified as “smart people only.” Although it is very easy and simple, it requires great focus.

The picture shows 10 pencils arranged on a desk in four groups, read from right to left 1, 2, 3, 4 and the order is required to reverse the order so that the number of pens in groups becomes 4, 3, 2, 1 by moving one pencil.

To solve this puzzle, you have to move the second pencil from the left into the empty space between the first pencil on the far right and the next pair, so that this group becomes 4 pencils. 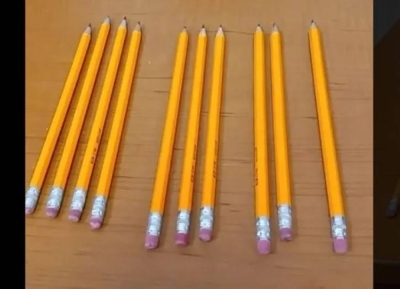 After years living in the Californian capital, Dayanara Torres takes a leap to the eastern United States to start a new stage, in a new house, as shared on the Instagram network.

The judge of the competition “Look who dances”, from the Univision network, recently experienced the so-called “empty nest” due to the separation of her children Cristian and Ryan for study reasons, which is why she was left alone.

Her sister and other family, as well as her work commitments are located in the city of Miami, Florida, so it is a well thought out move for her.

“Hello Florida. New year, new place… It’s a new day! Decorating my new home,” she shared this morning along with a video in which she is shown pulling out decorating details from her own line of items.

“I was left alone and when they say that this process is strong, I lived it, because I was always a mother. So, suddenly that’s gone and what do I do, but I have to let them go, grow, fly, that’s what all growth is for and raise them well and make the right decisions, but yes, they’re gone, “shared the former Miss Universo in November of last year, precisely when he presented the Dayanara collection on Isla, available at Me Salvé.

Love has also haunted her since then and although she has been very secretive about her new relationship, it has probably been one more reason to move. She only revealed to this newspaper that her new love is Latino, not Puerto Rican, and is not part of the artistic world either.