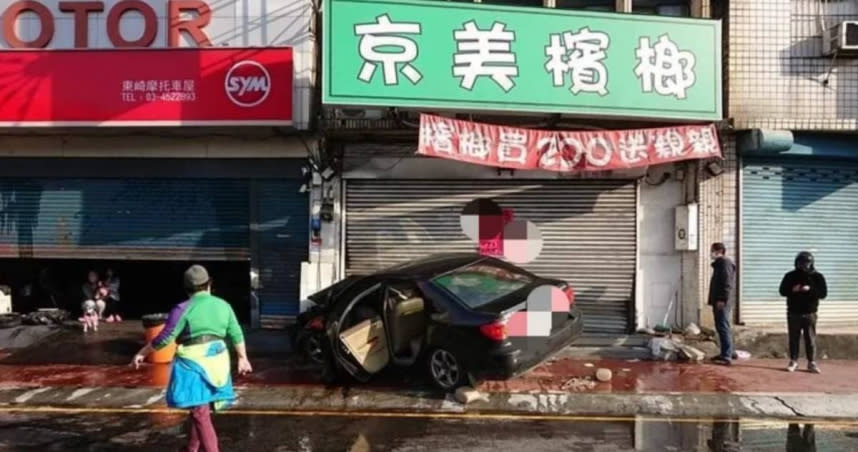 [周刊王CTWANT] At 7:28 a.m. on the 27th, a car accident occurred in Xu Taoyuan City. A 31-year-old man surnamed Luo drove his 22-year-old girlfriend surnamed Qiu along Yanping Road in the direction of Pingzhen. It was suspected that two people were arguing for some reason and accidentally lost control and crashed into the road. The betel nut shop on the side of the betel collided with two people walking along the road. It also caused Luo Nan to fracture his head, hands and feet, and Qiu Nv’s face, hands, and feet to bruise. There was no danger to both sides, and there was no drunk driving. The detailed cause of the accident needs to be further investigated.

Since the impact point was a betel nut shop, it happened to hang “Buy betel nut for 200 for a kiss” (actually refers to kiss asparagus juice), some people posted on Facebook “I’m from Zhongli”, “A car crashed into the sidewalk, yes How anxious to buy betel nut 200?” Netizen KUOSO replied, saying, “I love eating betel nut a lot”, “I want to kiss before opening the door”, “Even if it’s a gift to a relative, there is no need to dismantle it”, “Yes If you want to kiss, buy betel nut next.”, “Fight for asparagus juice.”

The police said that the car accident happened at about 07:28 today. Luo Nan drove his girlfriend Qiu surnamed Qiu along the direction of Yanping to Pingzhen in Zhongli District. Accidentally crashed into a roadside betel nut shop, causing fractures on the driver’s head, left and right feet, and bruises on Qiu’s face, hands and feet. There was no danger to both parties’ lives, and there was no drunk driving. The detailed cause of the accident needs to be further investigated. The police appealed to passers-by to concentrate on driving to maintain traffic safety.

See more CTWANT articles
Wang Jialiang vomited and had diarrhea… Xu Weien was also infected with the couple’s “sleeping in separate rooms” and blinded fans
Ukraine was cut off from the Internet “Russia tried to fight an ideological war” God rescue!Musk launches “Starlink Satellite Broadband” to help
The war between Russia and Ukraine triggered fluctuations in international oil prices, domestic gasoline and diesel increased by 0.5 yuan and 0.4 yuan respectively

What are netizens talking about?
Abei is in the fourth grade! He hits directly: The key is very scary. Net: How to change Keyless?
Taiwan Lantern Festival’s solidarity with Ukraine
Russian tanks run out of fuel and Ukrainian people meet on the roadside: can you drag you back to Russia?
Taoyuan couple quarreling and bumping into betel nut stall “buy 200 for kiss” netizen crooked building
Dad called Costco to look at the Ferris wheel and was shocked to see the truth

Watch .. the destruction of a Russian military convoy on the outskirts of Kiev

Should Hans Vanaken be sent off for his little slap on Frey?