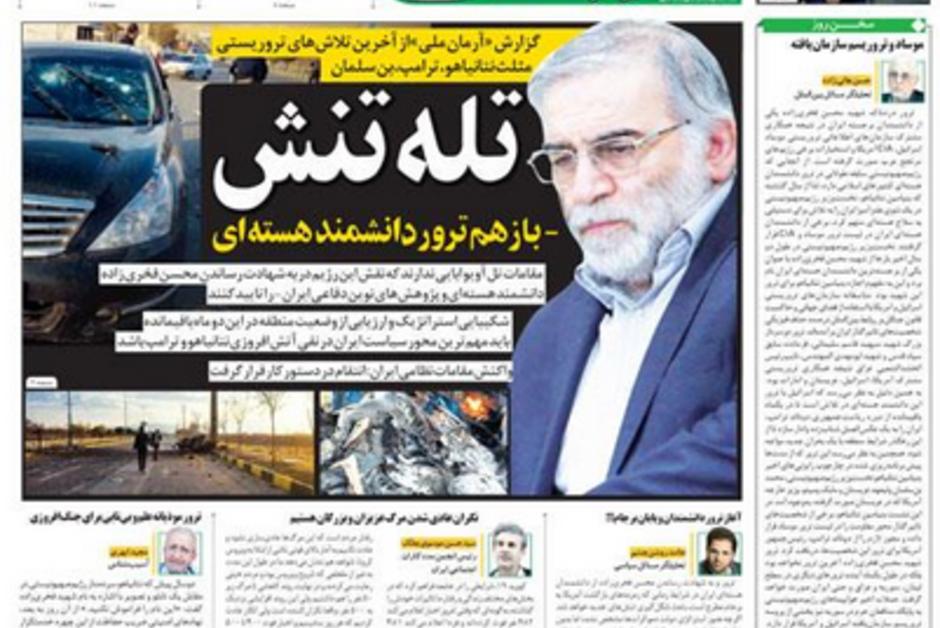 After the assassination near Tehran of Mohsen Fakhrizadeh, one of the “brains” of Iran’s nuclear program, the authorities are clearly blaming Israel. In the press, the daily Arman however, calls on the regime not to fall into the trap of Benjamin Netanahyou and urges him to be patient while waiting for Joe Biden’s inauguration in the United States.

Friday, November 27, the key player in Iran’s nuclear program, Mohsen Fakhrizadeh, was killed in broad daylight in Absard, a small town east of Tehran. The Iranian authorities, including President Hassan Rouhani and some soldiers, point the finger at Israel. This Saturday, some newspapers devoted their front pages to this assassination, the fifth since 2010 among Iranian nuclear scientists.

“The tension trap ”, headline the daily Arman, publishing on one the photo of Mohsen Fakhrizadeh and that of his car, riddled with bullets. “The Israeli authorities do not intend to hide their role in the death of martyr Fakhrizadeh, nuclear scientist and specialist in modern defense research”, supports Arman.

The newspaper, however, urges Tehran to continue its “Policy of strategic patience” and of “Take into account the situation in the region” during the next two months, that is, before the arrival at the White House of Democrat Joe Biden, in January 2021, who could have a more conciliatory approach with Iran. Arman calls on the Iranian government not to fall into the trap of Israeli Prime Minister Benjamin Netanyahu, and outgoing US President Donald Trump who seek to start a war with Iran.

An attempt to destabilize the Iranian regime

Mohsen Fakhrizadeh, according to Israeli and US intelligence services, was the director of Tehran’s secret military nuclear programs. His assassination, analysis Arman, sound like “The latest terrorist efforts of the triangle made up of Crown Prince of Saudi Arabia, Mohammed ben Salman, Benjamin Netanyahu, and Donald Trump”, The three enemies of Tehran, to destabilize the Iranian regime.

In 2018, Donald Trump, seeking to destroy one of the achievements of the presidency of his predecessor, Democrat Barack Obama and his vice-president Joe Biden, unilaterally withdrew from the 2015 nuclear agreement signed in Vienna. This agreement provided in particular for monitoring the Iranian nuclear light program in exchange for the lifting of sanctions. By withdrawing from the agreement, the United States imposed new sanctions on Tehran, hitting its economy hard.

A risk of escalation

Iran has since been very upset against the other signatories of the agreement, in particular the Europeans (United Kingdom, Germany, France), who have failed to provide the country with the economic benefits of the agreement. The election of Joe Biden in Washington who has already mentioned his desire to return to the nuclear deal has raised hope in Tehran, especially among President Hassan Rouhani and his reform supporters, as to the resumption of talks between the two countries .

The assassination of Mohsen Fakhrizadeh and the call for revenge from certain military authorities in the country and several press titles, however, raise fears of a confrontation between Iran and its adversaries.

The ultraconservative daily Kayhan for example has titled in one:

An eye for an eye. Zionists (jargon used to refer to Israelis) must be ready ”.