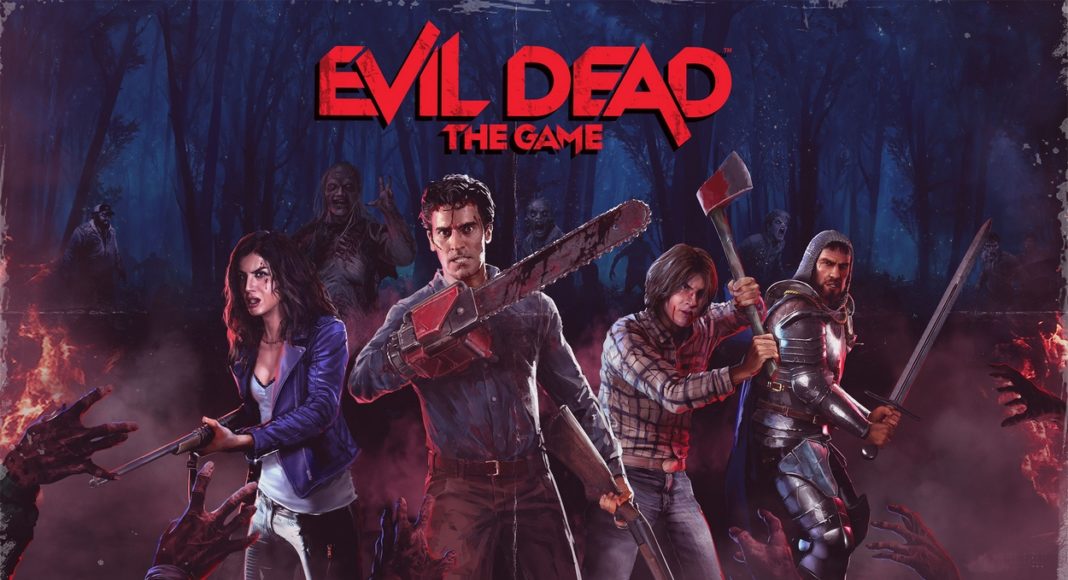 New production from the studio Saber Interactive (World War Z), Evil Dead is presented as an asymmetrical game, in line with Friday the 13th and Dead by Daylight. An effective formula which will above all have to prove its long-term potential…

If Evil Dead had already been entitled to several adaptations in video games, most of the projects that have emerged were sorely lacking in ambition. Saber Interactive, the studio behind the adaptation of World War Z, returns to the charge with an ambitious new project for an asymmetrical title.

In Evil Dead, four players will have to cooperate to survive the attacks of a Kandar demon. Faithful to the trilogy of Sam Raimi, the game proposes to embody a dozen survivors divided into several classes. Everyone has their own specialty: melee attacks, ranged, support, leadership… We find Ash of course, but also many secondary roles from the first three films and the spin-off series Ash vs Evil Dead.

In the skin of humans, the rules are after all quite classic: it will be a question of advancing in a group in a small open-world to try to find three pieces of cards by searching every corner. After which, you can retrieve a dagger, access the Necronomicon, the book of the dead, and send Kandar’s demon back to the other side. The game structure is the same in each game and this is undoubtedly the biggest criticism that we will address to this Evil Dead. By its nature, the title is extremely repetitive. There is no diversity in the objectives and, moreover, there are currently only two maps to explore…

That doesn’t mean the game isn’t fun to play though. The mechanisms are quite well established with loot to recover weapons and objects, hand-to-hand combat, ranged combat with different firearms, improving our character’s performance and even driving… to a Dead by Daylight, Evil Dead offers very large levels, in which you can move on foot but also in a vehicle. And what a pleasure to send a demon flying through the skies by rushing at it at full speed!

By alternating exploration sequences, fights, loot, boss fights and driving sequences, Evil Dead manages to offer an effective recipe. The trouble is that the title does not offer any diversity in the structure of its missions, which always take place in the same way, with objectives to be achieved in the same order.

The game also changes radically in style when you change sides. In the shoes of a demon, the player will have to move freely in the level. He will have to recover energy which will be used to set traps, take possession of trees, vehicles or players, and summon demons of all types. The objective this time is very different: separate your opponents as quickly as possible and try to knock out as many players as possible.

Evil Dead, however, suffers from major balance issues since only experienced players will manage to win a game in the shoes of a demon of Kandar. By sticking together, human players will have no trouble progressing through the mission. Conversely, four players who coordinate poorly and move separately will be very easy targets to defeat. And this, although it is possible to raise a knocked down player and even to resuscitate him once he is dead, bringing his soul back to a hotel.

If Evil Dead is therefore more ambitious and rich than Dead by Daylight or Friday the 13th, Saber Interactive’s game is clearly less accessible, less well balanced and more repetitive, due to its structure. The foundations for a solid experience are there, but it’s the finish that’s lacking.

It’s all the more unfortunate that pad in hand, the experience is really fun, whether on the side of humans or demons. We take pleasure in decapitating opposing demons, chaining combos and varying methods to progress, trying as far as possible to use the complementarities of our characters. In the skin of the demon, the game is a little more strategic, the player being able to anticipate the actions of his opponents by preparing ambushes and trapping supply crates. In both cases, we have fun like crazy, provided we are well accompanied.

During our games, it was not uncommon for the game to end as soon as one of the players died or decided to leave. The other players follow the movement, because they know very well that the game is instantly unbalanced. It is therefore better to play it with friends to coordinate than with strangers who risk doing anything…

You will understand: the whole point of the game is based on its community and your ability to join an effective group. It is certainly possible to play it with allies and opponents managed by the AI ​​but it is not that interesting… In the same vein, Saber Interactive has added a few solo missions retracing certain passages from the films. A good idea in itself, except that the style of the game does not suit this approach at all. Said missions are short, uninteresting and suffer from major balancing issues once again…

At €39.99, the bill is therefore rather hefty for an essentially multiplayer game which, when it comes out, only offers two maps to explore… There is certainly something to enjoy, if you are well surrounded, but not enough to spend full weeks there…

Technically, Evil Dead is on the other hand very clean. The sets of the game are very detailed, the characters are beautifully modeled and some nice special effects are present, such as fog, in particular. Despite a fairly short development cycle, the title also comes in very decent condition. The connections are stable and the bugs relatively few. Evil Dead also proves to be very faithful to the source material, whether it’s its soundtrack, general art direction, or the environments it runs through. We feel it, the developers are real fans.

Should we therefore crack? Strangely, Evil Dead is not necessarily a game aimed at diehard fans of the franchise. Asymmetrical games are aimed at a niche audience. A lambda player will undoubtedly find it very difficult to grasp the concept. Clearly, Evil Dead is a game aimed at players of Dead by Daylight, Friday the 13th and even potentially World War Z. If you’ve never played one of these titles, it might be worth checking out. try before you crack. Be careful though, the margin of learning is quite important since in addition to understanding the concept of the game, you will have to learn to master the skills of each character… Asymmetric games are in essence very time-consuming titles.

With Evil Dead, Saber Interactive is following in the footsteps of Dead by Daylight and Friday the 13th. The creators of World War Z deliver an asymmetrical game in which four players embody survivors who must face another player who embodies a demon. The game experience is radically different depending on the clan you have joined: in the shoes of a demon, you have to be strategic, lay ambushes, plan your attacks. The experience is fun, but is aimed at experienced players. In the shoes of humans, you will have to carry out small missions on the map until a final fight. The concept is – in essence – repetitive, the game is sometimes a little unbalanced and the clashes tend to quickly become messy, but despite these small flaws, Evil Dead turns out to be a very fun cooperative title to play through. The game mixes exploration, combat and loot sequences on a gigantic map. Technically, Evil Dead is very clean. The game seduces by its fidelity to the original material, and by some very original ideas… It even manages to offer a richer gameplay than its models. On the other hand, it is sorely lacking in content for the moment and is struggling to convince with its solo mode, which is relatively uninteresting to browse, even for a fan of the saga.

The diversity of the cast

The presence of vehicles

A little too easy for survivors