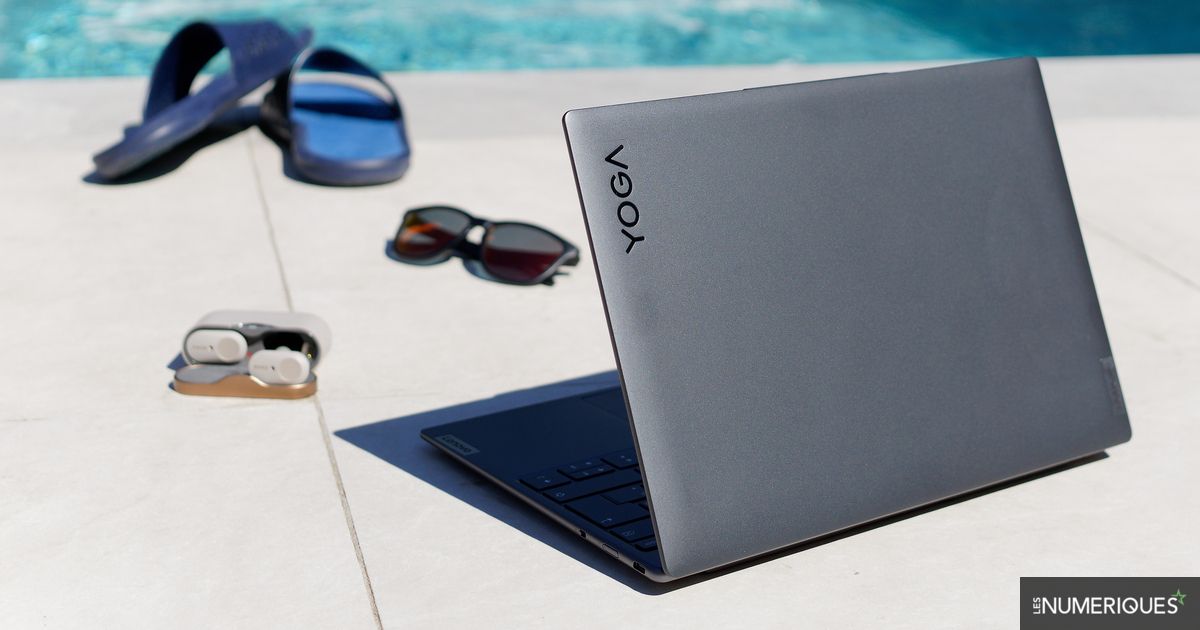 Austere in appearance, the Lenovo Yoga 7i Carbon therefore stands out as soon as you get started with its featherweight (870 g). A weight allowed by the use of magnesium and carbon fiber; don’t expect to see carbon fiber, it’s only used to reinforce the chassis.
Another surprise in the grip, Lenovo has abandoned the protruding edges for rounded edges, much more pleasant during manipulations.

We find this sobriety at the opening. The keyboard is typical of Lenovo, with its keys with rounded lower edges. The integration of the screen is particularly successful and our touchscreen version even offers a finish worthy of a matte screen.

The backlit keyboard offers a pleasant typing. Note that Lenovo has integrated several shortcuts which are not specified on the keys. The Fn+R combination allows you to change the refresh rate of the screen and Fn+P allows – when it works – to change the performance profile in Lenovo Vantage, the application that manages all the PC settings.
The touchpad lets our fingers glide smoothly. If it is of suitable size, we would have liked it to gain in width. Drag and drop with one finger tap is a bit steep and difficult to execute. Finally, the left and right buttons sink far into the touchpad.

If the previous version of the Lenovo 7i Carbon offered a variety of connections, this is far from the case with the 2022 version. You will have to be content with the ThunderBolt 4 port on the left edge and a USB-C 3.2 port (10 Gb/s) on the opposite slice. Lenovo provides a USB-C hub with HDMI, VGA (!), USB 3.0 port and jack, but we regret that this connection is not placed directly on the chassis, especially since Lenovo has found space to accommodate a switch for turn off the webcam.

Wireless connectivity is provided by the Intel AX211 chip providing the Yoga 7i Carbon with Wi-Fi 6E at 2400 Mb/s and Bluetooth 5.2. As for the webcam, the 720p sensor does not work miracles and will be sufficient for video. Note that it is however compatible with Windows Hello in order to unlock the PC, since this Yoga does not have a fingerprint reader.

The cooling of the processor is provided by a single fan blowing through a radiator, itself connected to the processor by a heat pipe. After 15 minutes of encoding, we note nearly 50°C on the upper part of the keyboard. Obviously, in everyday use you will not get these temperatures. On the other hand, noise pollution is contained (35.6 dB measured in our new audio laboratory). In use, and even heavily used, the Yoga 7i Carbon therefore remains relatively discreet; the breath will not disturb your open-space neighbors.

Access to components is easy. The removal of 6 Torx screws is enough to discover the bowels of the Yoga 7i Carbon. Unfortunately, you will only be able to replace the battery and the SSD, the rest of the components being soldered.

Lenovo lent us a Yoga 7i Carbon equipped with an Intel Core i7 1260P processor accompanied by 16 GB of RAM and a 1 TB SSD. This 12th generation processor features a hybrid architecture composed of 4 hyperthreaded “Performance” cores and 8 so-called “Efficient” cores, i.e. 16 logical cores, all in a thermal envelope of 28 W which can vary from 20 to 60 W depending on Lenovo’s settings.

In practice, during our encoding, the Core i7-1260P equipping this Yoga 7i Carbon runs on average at 2.43 GHz for the P-Cores and 1.83 GHz for the E-Cores, with respective maximums of 4.11 GHz. and 2.89GHz. The granted power envelope is respected, with an average of 28 W and a maximum of 47 W when conditions allow it.

The 1 TB SSD is a Samsung PM9A1, equivalent reserved for integrators of the Samsung 980 Pro. It achieves speeds of 6.3 GB/s read and 5 GB/s write in the Yoga 7i Carbon.

As on the majority of laptops, the speakers are placed under the PC, with always the same disadvantages: a rendering that depends on the support and a possible covering with the palms of the hands.

Listening, the Yoga 7i Carbon produces a decent sound volume, but the spectrum is reduced to the medium. The overall rendering gives the impression that the sound comes out of a box and a sibilance is heard on the “s”

We tested the headphone output of the adapter supplied by Lenovo and it did not shine with its performance. The output power is relatively low and the rest of the characteristics are below the usual averages.

The Lenovo Yoga 7i Carbon and its 870 g will easily find its way into your backpack. And it is not its size close to an A4 sheet that will penalize it (30 x 20.6 cm). Its 65 W charger is also very compact. Only regret, its USB-C cable is not detachable.

Certified Intel Evo, the Lenovo Yoga 7i Carbon should on paper reach 8 hours in everyday use according to Intel’s specifications. On our test protocol which consists of video playback on Netflix, under Chrome, at a brightness of 200 cd / m² with headphones at 50% volume, the Lenovo Yoga 7i Carbon lasts just under 7 hours. This is explained by the battery capacity of 50.2 Wh; in comparison, the Dell XPS 13 Plus has a 55 Wh battery and the Asus ZenBook S 13 Oled has a 65 Wh battery.

Swiss pension funds: performance at the end of July 2022

François Dumont, a remarkable and seductive stylistic demonstration in Saint-Ursanne