Fans of Point and Click adventure games have something to be thrilled about. After the very beautiful tribute to the genre with Lord Winklebottom InvestigatesReturn to Monkey Island takes up the model of its predecessors and offers a candy with a soft and light coating but with a spicy heart.

If it is the sixth game in the Monkey Island franchise, it is only the third made by its creator Ron Gilbert, today at the head of the Terrible Toybox studio which he founded in 2013, and accompanied for the occasion of his former sidekick Dave Grossman. It is therefore logical that the scenario is located after LeChuck’s Revenge, ignoring the existing sequels. This return to basics is possible thanks to Devolver Digital, champion of independent publishing, (Hotline Miami, Shadow Warrior, Cult of the Lamb…), which publishes the game in agreement with Disney, which now owns the license as well as all the LucasArts games.

Pirates, we put on our most beautiful eye patch and we dive for about eight hours in the time when Point and Click reigned supreme!

Much more than a pirate story

Above all, a reminder shot is offered to us via a souvenir album containing the key moments of the two adventures previously experienced by our hero Guybrush Threepwood. By selecting the various objects or photographs pinned in this diary, the protagonist reminds us how he obtained this status, met his wife or even defeated his lifelong enemy, the ghost pirate called LeChuck.

The story is told to us on a bench

Once our memory has been stimulated, we embark on new adventures and, to do this, several options are available to us, starting with the choice of languages. The dubbing being only available in English or German, we choose that of Dickens which is more familiar to us, especially for a game where the jokes are legion. Fortunately, French subtitles are available and successful localization adapts the text to French expressions. The narration, already very dense, has the luxury of offering a long version with even more blabla. As in the past, the developers have concocted two difficulty modes applying to the puzzles to make life easier for newcomers. We are however never put in difficulty in one case as in the other and we do not have either the need to consult the game help available at any time and which explains the solutions very clearly to us.

We’re going back to Melee Island!

All these options which tend towards a simplification of the games are not new and it is a shame not to offer a real challenge since the possibility is given to us in game to obtain the answers in the event of a blockage. Moreover, if we understand that the goal is to reach old fans as well as players who have missed out on the mythical first stories of the franchise, and this despite their remakes, it still seems difficult to us for the second category of embrace the essence of Return to Monkey Island. Less incisive and more serious, the dialogues like the jokes that really hit home almost always find their echoes in past iterations of Guybrush’s adventures. Overall, the writing falls short of what the first two games offered us, no doubt due to the absence of Tim Schafer and the sanitized writing constraints of the modern world.

In reality, it’s not so much the wanderings of a clumsy and endearing pirate that the creative teams have been making us live for many years now, but rather the reflection of their own doubts and ambitions. Today much older and serene, they tell us a story that resembles the memory of a time borrowed from nostalgia and like all stories, they are a mixture of truth and romance.

The first act of the game serves as a tutorial. We embody the young son Threepwood who has a good time with his friends, imitates his father’s legendary fights against the terrifying Captain LeChuck, races with his comrades or feeds the ducks. Life is light and the real adventure finally begins when we join Guybrush. Sitting on a bench, he will finally tell us the story of the much sought-after secret of Monkey Island. This format is a real good idea. Far from taking his father’s word for it, his young descendants will interrupt the story regularly to make comments that question his father’s story. Thanks to this principle, dying three times in a row in game, in addition to unlocking a success, reveals significant hidden scenes.

As well as old friends…

Our dive into the hero’s memories begins with an air of deja vu full of nostalgia. Perched atop Mêlée Island, the words exchanged with the lookout remind us of our first steps in the original game. Then, head to the ScummBar to meet the three members of the pirate council. If we easily recognize the places traveled during our last adventures, the confrontation with the three scoundrels is a real shock. Exit the amateur pirates of Grog. Like vampires shining with a thousand lights, the modern version of this myth of piracy does not consume alcohol before marriage and prepares with care, probably going as far as washing, what horror! Not finding the desired help from their side, our last solution is to turn to our best enemy: LeChuck.

The first chapters of this fable are simply about finding the objects that allow us to solve the puzzles. We go through the places without any real difficulty or reflection. It will be necessary to arrive at the fourth act to have a greater freedom of action which in fact complicates our research and finally allows us to work our brains and to really take pleasure in the wacky answers found by our friend to get out of insoluble situations. The twists and turns are numerous but the game rarely strays from the beaten track unlike the end which gave us a real “wow effect”.

Guybrush is a character with relatively little empathy. He will not hesitate to abandon, poison or even slightly flatten his acquaintances or friends if this allows him to continue his discovery of the secret of Monkey Island. His way of advancing in his quest against all odds has often made us smile and led to incredible situations.

On the graphics side, exit the pixels. The designs sport a brighter style and the island of Mêlée is seemingly more bling-bling. The city is actually abandoned, the shops are closing one after the other, the walls are tagged, but apparently everything is fine and everything is beautiful… Barely masked criticism of the developers on what we sometimes find in our own reality. On the whole, we easily recognize the places and, once again, it is the fourth part of the title which makes us travel in very different environments from each other, with a perfectly transcribed atmosphere. Passages by boat are, for their part, imaged by a camera roll effect which can be unpleasant in the long term but fortunately can be deactivated via the settings menu.

While traveling on the waves

The elements with which we can interact are clearly highlighted and the controls have, for once, been perfectly adapted to our controllers. Guybrush moves with the left joystick and switching between nearby points of interest is very easy with the high triggers. Only the collectible cards will be slightly less easy to spot, forcing us to press the LB and RB keys simultaneously in order to reveal all the possible interactions in the area. Once one of these has been picked up, a quiz with four answers is offered to us. Unfortunately, without the help of the internet you have to be a real expert of the series, combined with a lynx eye to answer it correctly. For example: “Originally, the first Monkey Island game was called…” If the answer is wrong, the card simply disappears. It’s rough and you’ll have to hope to come across it again to give the right answer. 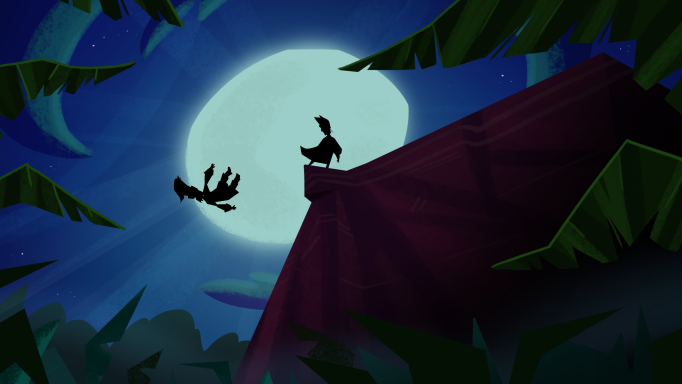 With a sense of déjà vu

In its gameplay, the game is intended to be classic and efficient with the possibility of running, analyzing the objects in our inventory at any time in order to look for clues, or even passing the dialogues more quickly. This last point is taught to us during a particularly successful tutorial based on the history of a boat anchor.

In order not to lose our progress, the automatic saving is done on a regular basis, but the possibility of doing it manually is given to us. Useful for unlocking as many achievements as possible in one run. Even with this trick, it’s almost impossible to complete it with just one game. Be warned pirates, you will not complete your 1000G without outside help. In our case, it’s an honorable 515G.

Everything is finally accompanied by the music of Michael Land, Peter McConnell and Clint Bajakian, to whom we owe the very successful soundtracks of the saga and most of the LucasArts games. If they stick perfectly to the environments and situations, no melody really seemed to us to stand out. Everything is ultimately rather wise and calibrated like the rest of the game.

Marcel on Imacec: “The Chilean economy is being more resilient than many have expected” | Economy