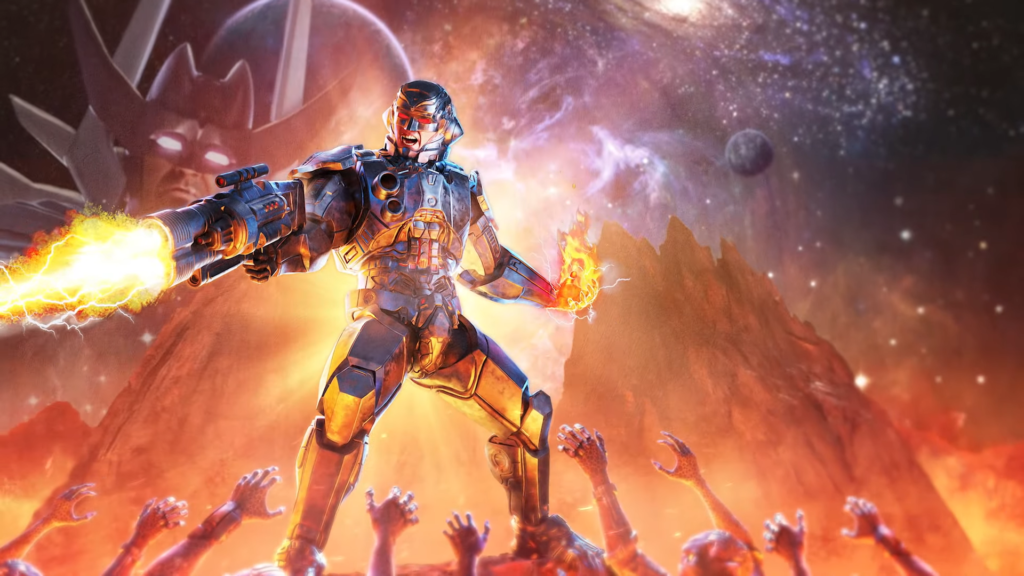 Turrican is a series which should not speak to many people, but it is about a series which made the heyday of the 16bits era, as well on Mega drive as on Super Nintendo (and microcomputers of the time). To my knowledge, Turrican Flashback Collection is the first compilation dedicated to the series, and I have to say that it brought back some great memories.

We rediscover a great classic!

Some who read us here already know that i’m a 90s kid, having spent most of my youth on Mega Drive, despite a certain paternal aversion to the media. Sometimes, however, it happened that my father brought me game cartridges from I do not know where in the idea – I like to believe it – to make me happy. Among these titles, a blue box featuring an overarmed cyborg titled “Turrican”. I didn’t know it yet, but I had a Run’n Gun whose soundtrack would trot in my head thirty years later.

Turrican Flashback Collection Yet offers me to touch titles that I had never had the chance to play until now, so this article exudes both nostalgia and discovery.

Concretely, the games included are Turrican and Turrican II which were released for Amiga in 1990 and 1991, respectively, as well as Mega Turrican for Mega Drive in 1994 and Super Turrican for Super Nintendo in 1993. Some of these titles have of course seen various ports on other consoles of the time, but we will not go into detail here.

Purists will argue that some games are missing, like the NES version of Super Turrican as well as the different console versions of each title included, but for me that’s a false negative. Nevertheless, whether you are a curious newcomer or a connoisseur of the titles of the time, Turrican Flashback Collection does the right thing to welcome you.

In Turrican, we control a cyborg warrior capable of triggering the apocalypse with a varied arsenal. Therefore, you will have to learn many manipulations like shoot, jump, dodge, fire grenades, trigger explosions that sweep across the screen, transform yourself into an invulnerable but uncontrollable spiked ball, drop bombs, grab ceilings, and much more. The learning can be long, especially as enemies abound on the screen. Also know that despite its appearance, Turrican is also an exploration game, a big part of the game is exploring the levels, as they are quite complex, vast, even labyrinthine.

In short, you will die often, you will get lost too, and you’ll hate to have had to go through a segment littered with traps just to reap a bonus (and have to backtrack on the same traps), but that’s part of the experience. Note that said that all is not perfect in the Turrican series, especially the camera not moving fast enough in relation to you and therefore hides part of the danger from you further. As well, the games are tough, armored with enemies and traps, with very little possibility of healing. Without forgetting of course the timer which runs endlessly and discourages you from lingering too long to search the levels and find the exit.

Is the interface customization level that the game does a good job. Unfortunately we do not have no additional content like gallery or trivia, even design videos, but we have a lot of customization options and very practical options today.

First of all, we have the famous “Save State”That all emulation enthusiasts know well, with different slots available for each game. But you also have at your disposal the “go back”, Very saving in an experience like Turrican, where the life gauge can empty in seconds on a bad jump.

Visually, you can also customize controls, change zoom, scale and wallpaper, apply CRT filters and colors, and activate cheat mode for each game.

But if you are tough, a real one, a tattooed one, you will be able to unlock trophies by disabling all these modern options. Which makes this collection one of the few to reward really getting involved and giving of yourself to complete the games.

So we come to the most striking aspect for me: the music. If we could blame the Mega Drive for its dedicated sound chip, Turrican not only succeeded in screw us his catchy melody in mind, but in addition to making all the shots, explosions and other percussive effects without smashing our ears. And as much to tell you that 30 years later, I still know the melody, whose quieter resumption of the home screen propelled me one Wednesday afternoon, in my room, relaunching a small game before the broadcast of Dragon Ball Z at Club Dorothée. Few music has that effect, but Turrican’s melodies are one of them!