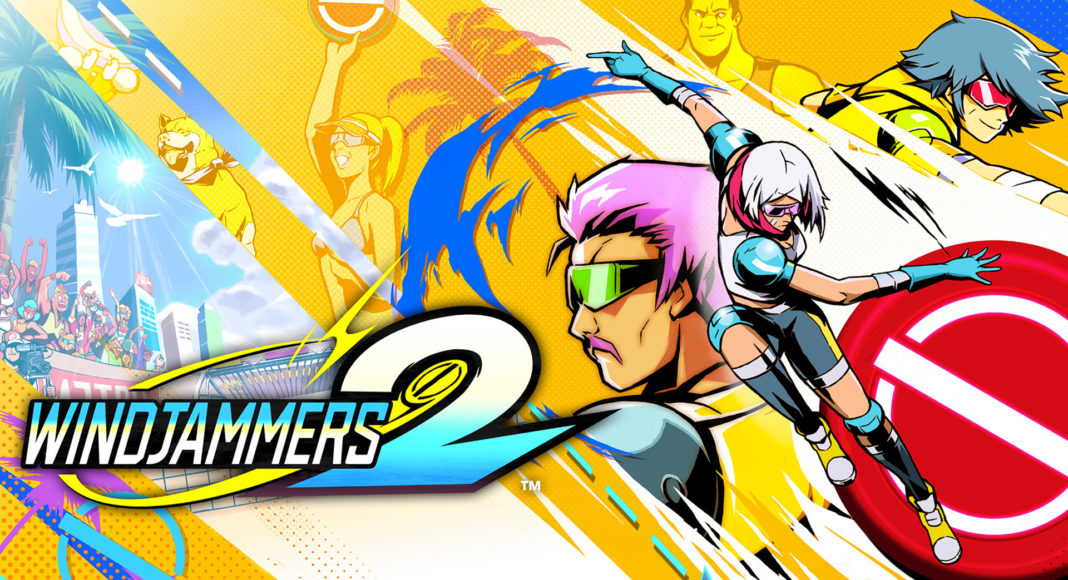 Dotemu strikes again! After bringing classic series like Streets of Rage or Wonder Boy up to date, the French publisher is now tackling an Arcade game that has gained a little notoriety over time. Windjammers 2 is a true sequel to the 90s game.

First released on Arcade terminals in 1994, then ported to Neo-Geo consoles, the first Windjammers has remained in the minds of fans of Versus games, especially in recent years thanks to the title’s presence in sports tournaments such as EVO. More than 25 years later, Dotemu is resuscitating SNK’s license by offering a brand new episode, a sequel soberly named Windjammers 2. This new opus intends to put this classic opposition game back on the front of the stage.

The principle of Windjammers 2 is simple, it is a sports game of frisbee throwing. The goal of a match is to send the Frisbee into the opponent’s cages to score points, a bit like Pong. Some places in the cages are more complicated to reach and earn more points. It is then necessary to control a character who must not let anything pass and counterattack thanks to many movements. It is possible to put effect in our shots, to return an opposing shot, to make a lob… With good timing, it is also possible to throw the frisbee in the air and thus have the possibility of jumping and smash, or charge our next throw while waiting for the Frisbee to land. So many options that put pressure on the opponent to find a flaw in his game.

Like a fighting game, the title also offers a gauge at the bottom of the screen that loads during the match. Once it’s full, it’s possible to spend it to make a very powerful attack or to make a defensive move by propelling the frisbee in the air, which allows you to restore the advantage. There are ten playable characters to choose from, each with their own unique Power/Speed ​​ratio and special shots. Finally, the arenas of the game also bring a bit of renewal since some have obstacles, sizes and different configurations which allow to bring a little diversity in the matches.

Regulars of the first game will not be lost in the face of this second episode, which is still similar. Some techniques are real novelties that offer more possibilities, but the gameplay and sensations remain essentially the same as 27 years ago. A very effective gameplay at the time and which is still today. Frisbee exchanges are intense and put our reflexes to the test. However, we must learn to play by ourselves because the game does not hold our hand. A “tutorial” section is available in the main menu but is not particularly effective in teaching newcomers the intricacies of gameplay. Playing Windjammers 2 is learned by doing.

The title smells like the 90s thanks to an aesthetic inspired by SNK games of the time. Mostly drawn by hand, the very colorful visuals of the title are of the most beautiful effect. The characters and settings are vivid and detailed. The animations give a lot of dynamism to the action which manages to remain perfectly fluid. This retro style is also transcribed by the sound design of the game. The music is not particularly striking but contributes to creating a sporty and dynamic atmosphere to the whole. The characters also have a few lines dubbed in their original languages.

Where the title is less generous is in the content it offers. Windjammers 2 has very few game modes. Apart from a free mode allowing you to face an artificial intelligence or another person locally, the title offers an Arcade mode which is a succession of matches with some mini-games sympathetic. Obviously, the heart of the game is in its online mode allowing you to take part in ranked games or quick matches. But that’s about all Windjammers 2 offers, no unlockable content, everything is accessible from the start. A few variations of additional matches would have been welcome to prolong the pleasure.

This pleasure is still very present during the matches as the gameplay is effective. This is also the case online, the experience is particularly pleasant thanks to the implementation of Rollback Netcode, a process that allows the game to anticipate player actions and provide online games with impeccable fluidity, even in front of someone whose connection leaves something to be desired. The matches are short, intense and exhilarating, producing that devilishly addictive “last one” effect. This sequel is a true love letter to the first game and a great gift to fans of versus and esports games.

After putting classic series like Streets of Rage or Wonder Boy back in the spotlight, Dotemu is now tackling Windjammers, an arcade game from SNK released in 1994. The French publisher is offering a sequel to this title which knew how to thrill fans of versus games. If you don’t know the concept, it’s a sports game where the goal is to throw a Frisbee into the opponent’s cages to earn points. In control of one of the ten playable characters, it is a question of returning this frisbee using different techniques such as lobs or smashes in order to find a fault in the opponent’s game. The gameplay turns out to be devilishly fun and intense when you grasp its full depth. Windjammers 2 is, in fact, a title with many subtleties that must be discovered while practicing, the fault of an ineffective tutorial. Visually successful and very colorful, the title is inspired by SNK games of the time and offers a soundtrack that fits well with the rest. The biggest concern of the game lies in its lack of content since, apart from local or online matches, it only offers a small arcade mode that ends very quickly. All the interest obviously lies in its online mode where its arcade gameplay really shines. Windjammers 2 is a fun, exhilarating and addictive title that will delight fans of versus games.

The different arenas that change our strategies a bit

Little content and a game that struggles to renew itself

Europol whistles the end of the game by cutting VPNLab