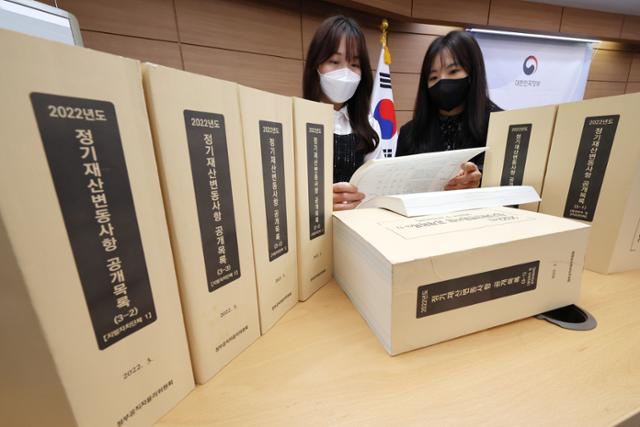 Officials from the Ministry of Human Resources and Innovation are examining the contents of regular property changes reported by 1,978 high-ranking public officials at the government complex in Sejong, Sejong, on the 30th. yunhap news.

As of the end of last year, high-ranking government officials had an average of 1.6 billion won in wealth. The increase was more than 160 million won in one year, and the main reason was the rise in asset prices, including real estate and stocks.

On the 31st, the Government Official Ethics Committee published ‘Public Officials’ Regular Property Changes in 2022′ through the Electronic Official Gazette. As of December 31 of last year, 1,978 high-ranking public officials including government officials belonging to the administration, provisional grades of senior civil servants, presidents of national universities, heads of public service-related organizations, heads of metropolitan/basic local governments, members of metropolitan and provincial superintendents of education, etc. , the property details of lineal ascendants and descendants.

This property report increased by 166.29 million won from the previous year (1.455.16 million won). The proportion of public officials whose wealth increased during this period reached 83% (1,641 people). As a result of analyzing the factors of property fluctuations, the committee revealed that the increase in property due to the increase in the official price of housing and land and stock price was 95.27 million won, accounting for 57.3% of the total net increase. The increase in net wealth due to salary savings, inheritance, and receipts was KRW 71.01 million (42.7%).

Based on this report, the committee plans to intensively review the changes in public officials’ property by the end of June this year. In the process, if a case of omission or false description of property intentionally or grossly negligently, or a case of obtaining property benefits by using secrets learned in the course of the job, etc. Subjects may be subjected to warnings and corrective actions, fines for negligence, requests for resolutions on dismissal/discipline, requests for investigation by related organizations, etc., depending on the degree of violation. The committee said, “In order to realize a trustworthy public service society, we will induce and support public officials’ faithful registration of property, and strictly examine the registered property.”