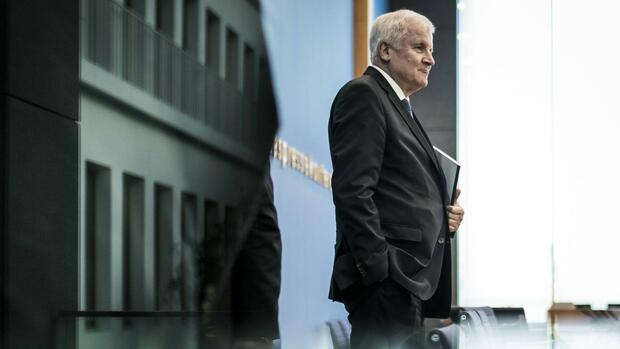 “The public discussion of disinformation and conspiracy theories is important,” says the Federal Minister of the Interior.

Berlin Federal Interior Minister Horst Seehofer has announced that he will be monitoring the demonstrations by opponents of the current Corona measures more closely. It worries him that right-wing extremists and citizens of the Reich are demonstrating together with anti-vaccination opponents and Corona critics, the CSU politician told the Handelsblatt and at the same time warned: “The security authorities have a close look at what has developed.”

In the past few days, demands had been raised in many places that the protection of the Constitution should deal more intensively with the “lateral thinking” movement. Seehofer has now warned that the spread of disinformation and conspiracy theories in the pandemic “encourages radical forces and is suitable for manipulating democratic decision-making”.

He defended his claim to make it easier for investigators to access communication services such as WhatsApp. Perpetrators used their encryption to cover up their criminal activities. “We have to take action against severe and extremely serious threats,” he emphasized.

In the dispute over the role of the Chinese technology group Huawei in the 5G network, Seehofer relies on the control of critical components. He considers a general exclusion of individual providers only to be the “second best solution”.

So what to do
But there is no simple antidote to this. Basically, the more attentive we are to disinformation as a political weapon, the better we can protect ourselves from these attacks on our political system. That is precisely why the public debate on disinformation and conspiracy theories is important. The vast majority of people are not ready to accept the damage to our free democracy.

Right-wing extremists are using the pandemic to address new groups in the population.
The phenomenon is not new, but it still worries me that right-wing extremists, Reich citizens and conspiracy ideologues are demonstrating together with anti-vaccination opponents and Corona critics. Everyone has to check for himself with whom he is making a deal. The security authorities have a close look at what has developed there. Ultimately, however, all social forces need to work closely and closely together in order to counter extremist trends in the long term. Only last Wednesday we presented a catalog of 89 measures with which we want to continue on the path in this direction.

Demonstration against Corona restrictions in Berlin

“I see the spread of disinformation and conspiracy theories about the corona crisis with concern,” said Interior Minister Seehofer.

The federal government had to revise the law against hate crime due to constitutional objections. Is it still the case that social networks have to report criminal content including data about its author to the Federal Criminal Police Office?
The draft law is already being coordinated between the departments. We want to bring him into the cabinet as quickly as possible. The government continues to adhere to the obligation of social network operators to report certain content.

How do you intend to prevent the expected flood of proceedings from overwhelming the BKA and the public prosecutor’s offices?
The new reporting obligation will lead to a high number of reports to the BKA and to more criminal proceedings. The BKA is working intensively on this and has meanwhile developed an IT-based procedure that will help cope with the increased volume. We have also significantly strengthened the BKA’s personnel. The BKA is also in close contact with the federal states.

Criminals and terrorists understood early on how to nestle in the dark corners of the Internet. How far are the authorities able to find the perpetrators?
Our security authorities repeatedly achieve success in investigations in the so-called Darknet. In October there were nationwide investigations into the trade in illegal goods and services via the messenger service Telegram, and I remind you that the darknet trading platform “Wall Street Market” was shut down in the middle of last year. As part of this, our security authorities repeatedly come up against their limits with the classic investigative instruments. When dealing with encryption, we need framework conditions with which this imbalance can be balanced out under the rule of law.

They are calling for investigators to have easier access to encrypted services such as Telegram or WhatsApp. How do you intend to prevent criminals from slipping through the back doors?
This is exactly what we are discussing nationally and also with our partners at EU level. Encryption is essential to protect the confidentiality of information. But it is also certain that the perpetrators use encryption to conceal their criminal activities. We must take action against serious and extremely serious threats, there can be no doubt about that. We want to develop possible solutions together with the providers of the Internet platforms.

After two years of dispute, the federal government is heading towards an agreement on a new IT security law. The role of the Chinese company Huawei in the German 5G mobile network was highly controversial. Why has the federal government been maneuvering around here for years?
The IT Security Act 2.0 provides for a comprehensive strengthening of IT security in Germany for authorities and companies. However, this also means the need for careful consideration, namely the question of the extent to which the requirements for IT security justify interventions in economic activity. We had intensive discussions on the subject of the 5G mobile network. We now have a good, balanced result.

European countries like Poland, Great Britain and Sweden have clearly decided against Chinese suppliers like Huawei when setting up the new 5G networks. Germany doesn’t. Are you afraid of Beijing’s reaction?
In 2020 we will have to meet technical challenges primarily technically. In my opinion, it is only the second best way to generally exclude providers from the market. The path that has now been taken defines increased safety requirements for all manufacturers, regardless of which country on earth. This significantly improves IT security overall.

Can providers from a high-tech surveillance state be trustworthy?
Primarily it does not depend on the country of origin, but on the technology that is used. We have now introduced a legal regulation that allows us to check trustworthiness in an appropriate manner. Our security interests take up a lot of space.

Do network operators now have to prepare for billions of dollars because they are allowed to use fewer components from Chinese suppliers?
The question of additional costs does not arise. The network operators are responsible for the adequate security of their networks. In principle, components from Chinese manufacturers can also be used if they meet the requirements for IT security and trustworthiness.
Mr. Seehofer, thank you for the interview.