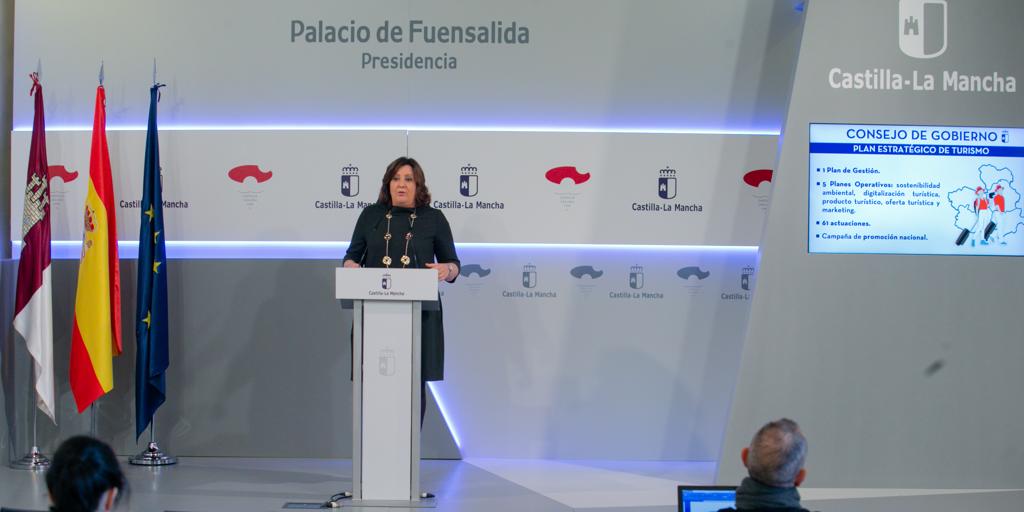 Taking advantage of the end of the International Tourism Fair (Fitur), in which the stand of Castilla-La Mancha has received 207,562 visits, the regional Executive approved on Tuesday at the Governing Council the Strategic Tourism Plan 2020-2023. An initiative that has been agreed with the tourism sector with a budget of 65 million euros and that includes, among its main measures, a signaling plan that will be endowed with 16 million euros and promotional campaigns that will have an investment of about 25 million.

As explained by the Minister of Economy, Business and Employment, Patricia Franco, who was the one who reported in the press room of the Fuensalida Palace, this initiative is divided into five operational plans, in addition to a destination area and a management area with 61 performances In the first section, at the destination, they will try to see what resources make up the regional tourism offer and what the companies in the sector offer. And, in the area of ​​management, the objective is the promotion of Castilla-La Mancha as a tourist destination.

Within this management plan, in turn, 12 lines of action that were listed by the director are framed. Among them, he cited the strengthening of the Tourism Council to agree on all the initiatives to be implemented, measures to promote equality, take advantage of the tourism intelligence system, continue making efforts to adapt the current regulations to the new national and international conjuncture

But, among all of them, Franco highlighted the announcement made by President Emiliano García-Page during the celebration of Fitur, which is a new tourist signage plan, with a budget of 16 million euros. And, in line with this measure, he also stressed, as something new, the recognition of municipalities as tourist destinations.

And, on the other hand, the counselor referred to five operational plans within the tourism strategy for these four years. The first of these has to do with sustainability, both environmental and socio-economic, to preserve the biodiversity of animals and plants, betting on energy efficiency and the fight against the demographic challenge.

The second of these operational plans has to do with digitalization, which, in Franco’s opinion, has to go through the promotion of innovative culture in the tourism sector. For this, he said that training courses will be developed for professionals both private and public initiative. In addition, he announced the launch of a new institutional tourism website of the Community Board with better interaction, management and attracting visitors.

The third plan has to do with the tourism product, “in order to adapt it to the demands of the market, which demands more and more specialization,” said the Minister. Within this section, he highlighted the cultural heritage of Castilla-La Mancha, the museum and archeological spaces, but also nature tourism, to which we must add the congress, the cinema, the astronomical, the hunting, the family , the industrialist, the one to buy or the idiomatic.

Fourth, the operational plan of the tourist offer, which includes a renovation of the hotel sector of Castilla-La Mancha with an investment of about 2 million euros. And finally, the fifth of the plans has to do with the marketing and promotion of our destination in the international market, especially in countries such as France, China, the United States and the United Kingdom, without losing sight of other potential customers. To do this, a new advertising campaign will be developed with another two million euros that will have a clear message to attract tourists: «What you do not expect». .