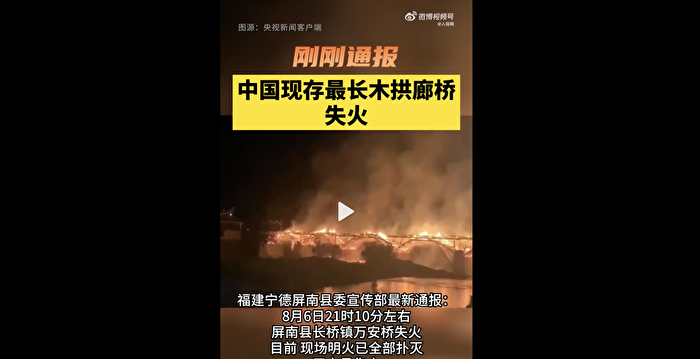 [The Epoch Times, August 7, 2022]On the evening of August 6, in Pingnan County, Ningde City, Fujian ProvinceWan’an BridgeThe bridge is on fireburn down.the bridgeFounded in Song Dynastywith a history of more than 900 years, is the longest existing wooden arch bridge in China.

The Paper reported that on the evening of August 6, the longest existing wooden arch bridge in China – Pingnan, Ningde, FujianWan’an BridgeThe fire broke out and was extinguished at 10:45 pm.

At present, the ancient bridge has been burned down to the skeleton and basically collapsed. No casualties yet.

Wan’an Bridge has a history of more than 900 years.

Wan’an Bridge is a five-pier six-hole wooden arched house bridge. The bridge is 98.2 meters long and 4.7 meters wide, with boat-shaped piers and unequal spans. The shortest arch span is 10.6 meters and the longest arch span is 15.2 meters. The bridge house has 38 bays, 156 columns, a bucket-type wooden frame, a double-slope roof, and wooden benches on both sides.

In the 25th year of Qing Daoguang (1845), it was rebuilt as a 34-bay 136-pillar bridge house, which was burned down in the early Republic of China. In the 21st year of the Republic of China (1932), it was rebuilt again. The bridge body was extended to the right bank with 38 bays and 156 columns. There was a double eaves bridge pavilion in the northwest of the bridge.

On May 25, 2006, Wan’an Bridge was announced as one of the “Northeast Fujian Covered Bridges” as the sixth batch of “National Key Cultural Relics Protection Units”.

Some netizens questioned the burning of Wan’an Bridge.

Netizen “Lanling laughed for a lifetime”: What happened? Why did Wan’an Bridge suddenly burn down? Was it man-made or natural? What a pity!

German embassy in China wants China to be ‘Cool Down’ – International

Price of the dollar in Chile today, August 8: exchange rate and value in Chilean pesos