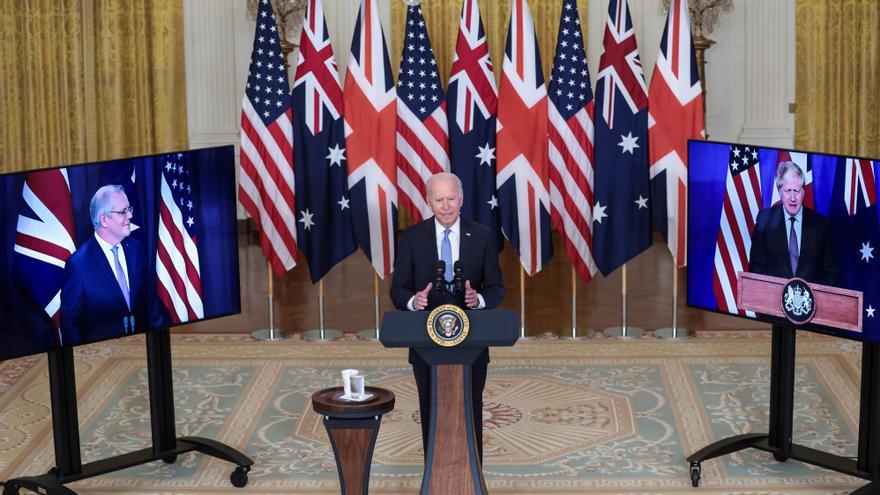 The waters of the Asia Pacific, the most unpredictable on the planet, will add another country with submarines with nuclear technology. The United States has invited the club to Australia and provoked the foreseeable ire of China just days after Joe Biden called Xi Jinping to oil bilateral relations and commit himself that the inevitable rivalry does not lead to conflict.

The latest Washington-sponsored agreement in the region was signed on Wednesday and christened AUKUS, acronym for United States, United Kingdom and Australia. The first discusses global primacy with China, the second seeks new areas of influence after its departure from the European Union and the third has collected friction with Beijing in the last year. They spoke of an “increased deterrent power” and they didn’t have to mention China. The agreement comes a few weeks after the hasty flight of US troops from Afghanistan and deepens the turn towards Asia that Obama already undertook after the dire adventures in the Middle East.

The treaty mentions areas of collaboration as disparate as information, artificial intelligence, quantum technology and the military. The heart is in the last and, more specifically, in the eight submarines powered by nuclear reactors that Australia will manufacture with the American and British advice. They are faster, more difficult to detect and their greater autonomy could bring them closer to Taiwan. The new flotilla, experts judge, will shore up Western hegemony in the Chinese backyard. They will not carry nuclear weapons, Canberra has promised, without the clarification reassuring Beijing.

The UK, Australia and US are natural allies, and our new partnership will become increasingly vital for defending our interests around the world and protecting our people back at home.

Sticks to the signers

The Chinese embassy in Washington, the official press, the Foreign Ministry … from all fronts the sticks have been rained on the signatories in a few hours. The agreement will stimulate the arms race in the area and it will harm peace and stability in the area, has predicted Zhao Lijian, ministerial spokesman, in one of the most belligerent press conferences of the year. He has also advised Washington to retire its “outdated cold war mentality” if it does not want to “shoot itself in the foot.”

An editorial in the ‘Global Times’, the most ultra-nationalist newspaper, lamented the “hysterical policy of American alliances” and saw in the agreement a “legalization of the export of nuclear technology” with dire consequences on a global scale. “Possession of nuclear-powered submarines will be a widespread temptation. The world needs to prepare for the fever for those submarines “, predicted. “The United States and its allies are leading the world into chaos. They have even violated nuclear non-proliferation agreements. And here comes an interesting question: Who is better prepared to resist global chaos? China or them?” the morning wondered.

International experts also anticipate that other governments will travel the new “Australian route” to violate the spirit of the nuclear non-proliferation treaties. Countries in the area much more threatened that faraway Australia like South Korea might also rethink their loyalty to commitments if they are overwhelmed by an insurmountable sense of naïveté.

China is not alone in condemnation. France has protested, more concerned about the pocketbook than about the turbulence at the other end of the globe. The AUKUS leaves on wet paper the agreement to build a dozen submarines for Canberra in exchange for more than 30 billion euros. The Ministry of Defense and the Foreign Ministry lamented the “lack of coherence” of the United States for cornering one of its main European partners and Gerard Araud, a former ambassador in Washington, spoke of “stabbing in the back.”

The absence in the New Zealand agreement is notorious, which will prevent the entry of nuclear submarines into its waters. And not all in Australia see the logic of the stubborn link with the United States in his crusade against China. For the former prime minister, Paul Keating, the agreement represents a “dramatic loss of sovereignty and dependence on the United States that will deprive Australia of its freedom to choose in any combat.”