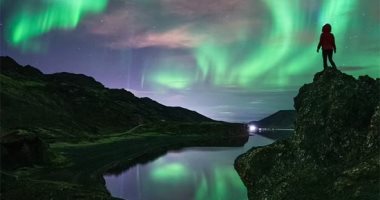 The northern lightsaurora borealisOne of the most exciting scenes on Earth, but astronomers are interested in the science behind it, as NASA has now revealed plans to launch two rockets directly through it, to study how our planet exchanges energy with outer space surrounding it.

According to the British newspaper, “Daily Mail”, the aurora borealis occur on the boundary between the neutral atmosphere that submerges our planet and the electrically reactive matter known as the plasma that makes up space.

Also, occasionally, when electrically charged particles from space pour into our atmosphere, they collide with neutral particles and ignite them, resulting in beautiful dancing waves of light that appear in the sky.

However, the aurora also raises the broader boundary layer, an effect on this layer that NASA hopes to study in an upcoming INCAA mission.

Also, as inhabitants of the troposphere, the lowest layer of the atmosphere on Earth, we are used to air made of neutral particles.

NASA explains that the oxygen and nitrogen we breathe are magnetically balanced atoms and molecules with all their electrons accounted for.

But hundreds of miles above us, our air begins to drastically change its molecules. Electrons are energized by unfiltered sunlight, electrons are stripped from its atoms, which then take on a positive charge, and the once-neutral gas turns into an electrically reactive state of a substance known as a plasma. .