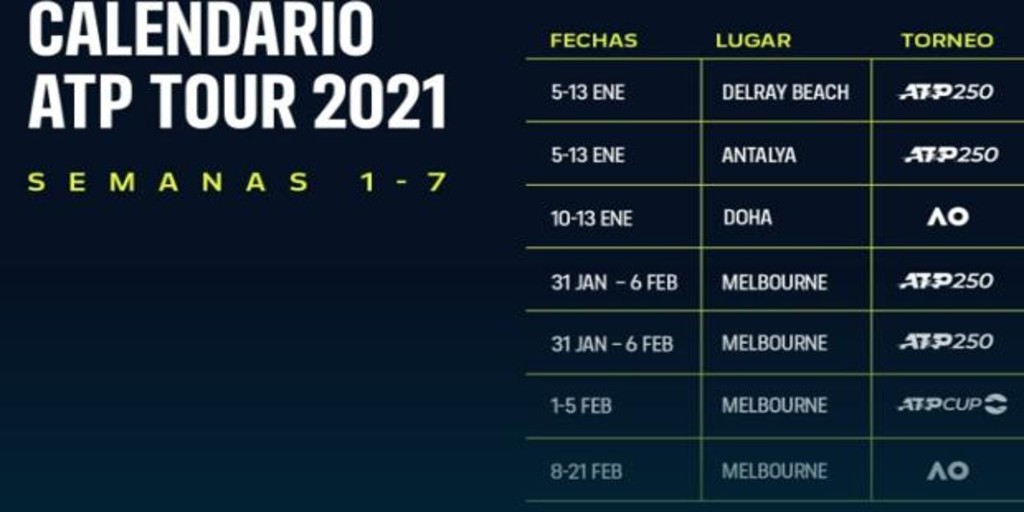 Now officially, the ATP has ratified the change of calendar for the beginning of the 2021 academic year with the transfer of Australian Open to February. Thus, the first Grand Slam of the year will be held from February 8 to 21, to facilitate the arrival and tuning of tennis players with the anti-coronavirus regulations imposed by the country.

However, this change in dates will substantially modify the rest of the calendar, which has not yet been released.

The organization of the Melbourne tournament has not issued any statement confirming the three-week delay from the initial date set, January 18.

The director of the Australian ‘major’, Craig Tiley, again published a statement a week ago through his Twitter account in which he explained that the meetings between Tennis Australia and the Victoria state government had not yet concluded to determine the quarantine conditions which players must undergo once they land in Australia.

According to the plan outlined by the professional tennis circuit, the season will kick off with the ATP 250 held in Delray Beach (United States) and Antalya (Turkey) that will begin on January 5.

This will be followed by the qualifying phase of the Australian Open, which will start on January 10 and will be held for the first time in Doha (Qatar) for four days.

Unlike the previous one, Melbourne will be the stage for the three competitions that will precede the Grand Slam: of the ATP 250 tournaments that will run in parallel between January 31 and February 6, as well as the ATP Cup that runs from February 1 to 5.

Labeling or safety problem … 12% of non-compliant toys, alerts the DGCCRF

final vote in the Assembly this Thursday, everything that concerns you