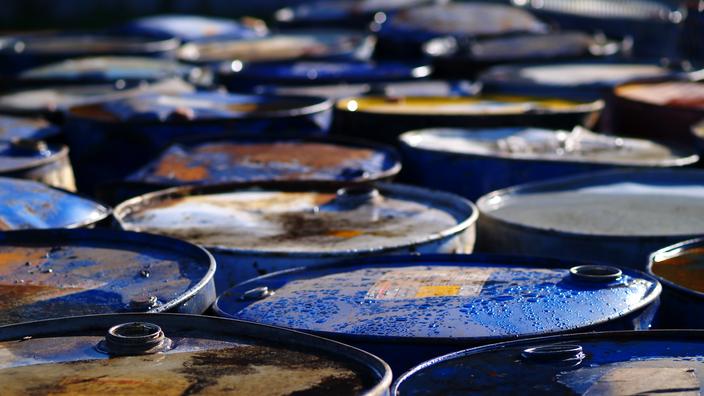 Europe would have “enough stocks to get through the winter”, according to Clément Beaune, the French Secretary of State for European Affairs.

Oil prices soared on Thursday, with the Russian military’s air and ground attack on Ukraine briefly pushing US WTI above $100 a barrel and Brent above $105 a barrel for the first time since 2014.

And immediatelyLIVE – War in Ukraine: Emmanuel Macron calls for a NATO summit

Moscow launched an invasion of Ukraine at dawn on Thursday, with airstrikes across the country, particularly on the capital Kiev, and the entry of ground forces from the north, east and south of the country. “The market expects a massive tightening of supplyblack gold, says Carsten Fritsch, an analyst at Commerzbank. Russia is one of the world’s leading producers of gas and oil, panicking investors about possible disruptions in the supply of hydrocarbons. “In the event of a partial interruption of Russian oil deliveries, other major producing countries could only compensate to a limited extent», warns the analyst.

Two days after recognizing the independence of Ukrainian separatist territories in Donbass, Russian President Vladimir Putin gave the signal for hostilities. “I made the decision for a special military operation“, he announced in a surprise statement on television before 6:00 a.m. “The seething tension surrounding Russia’s recognition of breakaway territories in eastern Ukraine escalated overnight», underlines Tamas Varga, of PVM Energy.

«At this point, it is not at all clear what could bring the Russian president to his senses.“, he abounds. “Consequently, stock and oil markets will remain volatile.At least 40 soldiers and a dozen civilians were killed Thursday in the early hours of Russia’s invasion of Ukraine, according to Kiev. The offensive sparked an international outcry, with emergency meetings planned in several Western countries, including NATO and the European Union.

An addiction to Russian gas

«The spike in the price of oil is terrible news for businesses and consumers, and basically it clarifies one of the main impacts of the war between Russia and Ukraine.on the global economy: “it will serve to further fuel inflationsays Russ Mould, analyst at AJ Bell. “Energy bills will continue to rise“, he continues.

Russia is also the world’s largest exporter of natural gas. The Old Continent imports about 40% of its needs from Russia. There is no immediate solution to replace imports from Russia on the European gas market, if these were to cease, warned the French energy giant TotalEnergies on Thursday. “If Russian gas does not come to Europe, we have a real subject of gas prices in Europe“, declared the president of the group Patrick Pouyanné, emphasizing the European dependence on Russian gas.

Read alsoOil over $100: what precedents?

French Secretary of State for European Affairs Clément Beaune assured him on Wednesday that Europe had “enough stocks to last the winter“. Following the recognition of pro-Russian Ukrainian provinces, Germany had finally resolved on Tuesday to suspend the certification of the Nord Stream 2 gas pipeline, a flagship project for Berlin as for Vladimir Putin carried out for a long time despite criticism.

A senior US official saw the Berlin announcement as a “major turning point” who “will free Europe from the Russian geostrategic stranglehold» related to the supply of natural gas. The reference market in Europe, the Dutch TTF (Title Transfer Facility) rose again, to 129.00 euros per megawatt hour (MWh). The price of natural gas has thus soared by 40%, the largest single-day increase since 2019.

Imagine if a Putin seized power in France and invaded Spain