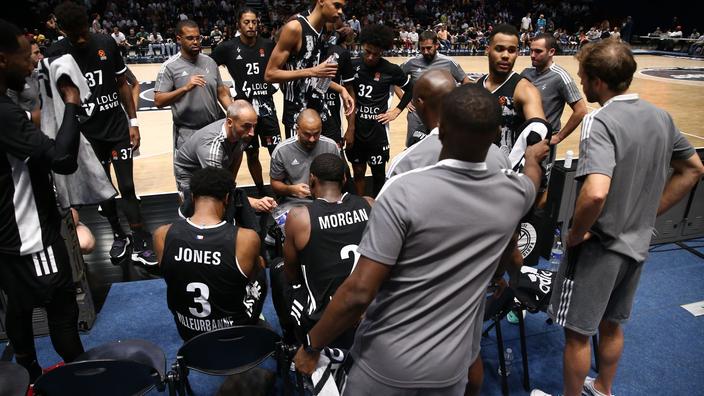 Reigning French champions, Lyon-Villeurbanne players will have to deal with competition from ASM Mike James this season.

If Villeurbanne, double title holder, and Monaco, reinforced, advance as favorites of the basketball Elite, which resumes its rights on Friday, the competition does not lack density with Dijon, Boulogne-Levallois or a promoted ambitious Parisian.

The French championship has changed title sponsor, losing an automaker to partner with a sports betting company. But if the ex-ProA struggles to find a paying broadcaster, it has not lost interest on the floors. On the contrary.

The first division of basketball can even boast of having a few headliners likely to boost its attractiveness. Among them: the French phenomenon Victor Wembanyama (2.19 m at 17), passed from Nanterre to Asvel and promised a bright future in the NBA. Let us also mention the coach Vincent Collet who, after a silver Olympic campaign with the Blues in Tokyo, has returned to club service in Boulogne-Levallois. Without forgetting the major rookie of Monaco, the American point guard Mike James, top scorer in the Euroleague in 2019.

The “Roca Team”, which discovered the C1 this season after its unprecedented coronation in the Eurocup (C2) at the end of April, is undoubtedly the most attractive team on paper. “This season Monaco will be over“, Also considers the rear-winger Lahaou Konaté, who is starting his second season at Boulogne-Levallois. “Afterwards, there is always Asvel, teams like Dijon, ours or even Bourg-en-Bresse“, Continues the player of the Metropolitans, opposed to Le Mans on Saturday.

The Principality’s team will go to Roanne, two days after its baptism in the Euroleague against Panathinaikos. Asvel, opposed to Kaunas on Friday in C1, will receive Gravelines on Sunday. The hardest part for the two Elite locomotives will be juggling competitions.

Asvel has prepared for it. But the club chaired by Tony Parker also had to reshuffle its workforce according to departures (Heurtel, Yabusele, Cole …). In addition to the Wembanyama nugget, the Franco-Senegalese giant Youssoupha Fall (2.21 m) has set down in the Rhône. Asvel has also enlisted the interior Kostas Antetokounmpo, little used by the Lakers in the NBA where his brother Giannis, comes out of a monstrous new season crowned with a first league title with the Bucks.

Asvel has also had a hard time. His vice-captain and winger, David Lighty, had to return to the United States for family reasons and will miss the start of the season. “It’s difficult at the preseason level. We are a little late due to injuriesCoach TJ Parker said Thursday. “To do as well (as last season) I know it’s difficult but the objectives are the same, to win as much as possible», Added the coach.

Other teams hope to be successful. Paris Basketball, promoted, aims for the play-offs. Dijon has not given up on dethroning the champion after a good 2020-2021 season, marked by a first place in the regular season and two finals, in Elite and in the Coupe de France. But the Burgundy club will have to do without coach Laurent Legname, now in charge of Bourg-en-Bresse, a team in progress. The 44-year-old technician has located his new team “in the suitors’ wagon behind the two scarecrows (Monaco and Asvel)»During the re-entry conference of the National Basketball League (LNB) in Paris, where the issue of TV rights was discussed at length.

The matches will be broadcast unencrypted on lnb.tv, the Sport channel in France and, one regional dropout per month, on France 3. Unless the LNB finds a private broadcaster. After the procrastination last season to adapt the formula to health constraints, this does not seem to be the trend. “The televisions were hurt by what happened. It weighs, even though it hasn’t been clearly said“, Underlined the president of the LNB Alain Béral. Basketball fans will at least be able to watch the fixtures without paying.