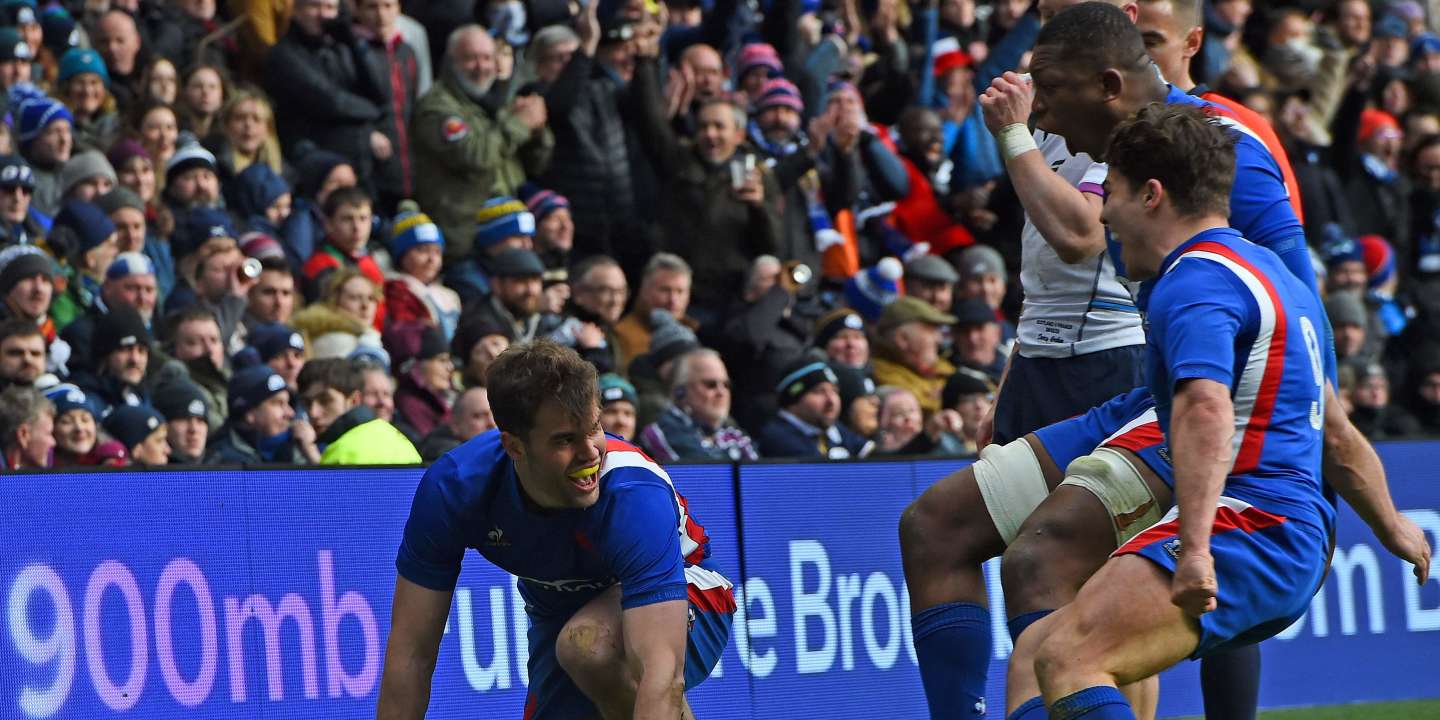 Antoine Dupont had announced it: “It will be a good fight. » Coming to rub shoulders with the Scottish Thistle in its den of Murrayfield, Saturday February 26, the XV of France knew that a tough game awaited it. And the first minutes, where French and Scots clashed, chaining scrums in the center of the field, seemed to set the scene. However, the meeting of the third day of the Six Nations Tournament turned to the tricolor alone. Large winners of the Scottish XV (36-17), the Blues won their third victory in a row, and have more than ever the Grand Slam in their sights.

In a crowded stadium, the Blues started with a bang. Before the quarter of an hour, they were leading (12-3), had scored two tries – by Paul Willemse and Yoram Moefana – and seemed determined not to let anything go. But Scotland also wanted to play. In a sometimes disheveled game, where the thirty players competed for initiative, Finn Russell’s partners closed the gap (by Rory Darge), and could even have turned in the lead. A raise from Duhan van der Merwe took the French defense the wrong way, and made Murrayfield roar. But the back Stuart Hogg, ideally shifted, failed to control the ball.

Two years ago, the French had paid dearly for their indiscipline (in particular the expulsion of Mohamed Haouas in the middle of the match). Unsatisfied with their second half of the first period, where they saw Scotland manhandle them in the game, the Blues could have lost their nerves. Not far from replying to a too rough defense after a touch, Cameron Woki holds back his arm, and does not give in to anger. A few minutes before the break, a card would have been the worst thing.

An offensive defense that pays

Instead, the Blues scored a third try, after a number from Gaël Fickou, in added time in the first half. “A key moment” of the meeting, according to Fabien Galthié, that his men were able to get through without incident. “We knew we were going to move forward on hostile ground, that they were going to try to get us out of the game like two years ago”, noted the third row François Cros. Gathered in a circle before the start of the game, the French promised each other to “respond with play and not leave energy in the context. »

Read also Six Nations Tournament 2022: in Scotland, the Blues want to forget the bites of the Thistle

Because these Blues learn from their mistakes. Manhandled by the determined return of the Irish after the break in the previous match, the Blues did not turn the second play against the Scottish players. “Having scored just before half-time allowed us to start on a good footinginsisted captain Antoine Dupont. In these international matches, we are always on the tightrope, and we have to know how to exploit the opportunities. » And once again, the blue defense started the machine.

To see the even more sullen face than usual from Shaun Edwards in the warm-up, we felt that the Blues were not there to mingle with the hordes of tricolor supporters having poured into the streets of Edinburgh. Often taciturn, the English coach of the French defense watched his troops meticulously. Twice, France had come up against the Scottish pitfall in the Tournament (in 2020 and 2021), and Fabien Galthié’s staff intended to plan everything so as not to sigh a third time.

Read also Article reserved for our subscribers Rugby: Shaun Edwards with golden hands, an Englishman with the Blues

At the break, the French erased the small problems, then they « [ont] hit hard », imagined Fabien Galthié. Faithful to the doctrine of their defense guru, the Blues defend by advancing, and their aggressive “rush defense” offers balls to the attackers.

The Blues showered the Scots

Following a recovery from François Cros, the French shift the ball to Damian Penaud. The blue winger plays on foot for himself, but is beaten on the run by the Scottish defense. But a mischievous rebound of the ball lobes the defenders of Chardon, and offers Jonathan Danty the test of the French bonus. The Scottish wind has definitely chosen the Blues, but don’t talk to them about luck. “The rebound falls into my arms, but you have to be in the right place at the right time, insists the center of La Rochelle, returned from injury for this meeting. This action starts from our 22 meters, so it could have ended much differently. »

“We knew that with a patient and aggressive defense, we were going to be able to recover ballswelcomed François Cros. We were able to exploit them, sometimes with luck, and that allowed us to put pressure on the Scottish shoulders. » A double from Damian Penaud completed the demonstration of the Blues, who if they left possession to their opponents, showered the Scots at the slightest error. “The quality of our defense and the consistency of our play helped us through difficult times.greeted Fabien Galthié. Then, at some point the Scots let go and we were able to exploit the opportunities. »

The late try scored by Duhan van der Merwe softened the Scottish rout a little (36-17 after the transformation). But it in no way diminishes the lesson of realism inflicted by the XV of France. “We don’t have to tick all the boxes in a match to win, we learned that together”, savored Fabien Galthié. The tricolor coach was undoubtedly referring to the “slight” failure of the game on foot, in particular that of his back Melvyn Jaminet: three missed attempts out of six, three out of seven in total for the Blues including the last failed transformation of Romain Ntamack.

Having the Grand Slam in sight – if not talking about it – the French will travel to Cardiff (Friday March 11) for their fourth meeting in this Tournament which they currently dominate unchallenged.

The Blues could congratulate themselves in a Murrayfield reduced to silence, like their lap of honor. This year, Scotland will not be the pebble in their shoe when it comes to doing the accounts at the end of the competition. No doubt Antoine Dupont had anticipated it. One “nice fight”it is the one from which we come out victorious.

Russia – Ukraine war: these are the countries that support Russia and those that are with Ukraine | Main reactions to the Russian “military operation” in Ukraine | Donbas | Donetsk | Luhansk | War | Invasion | | WORLD