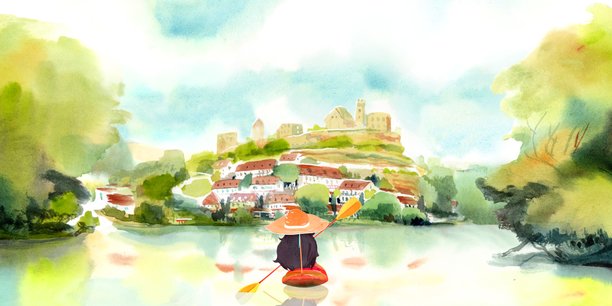 “There will be a before and after Dordogne”says Aymeric Castaing, founder and director of the Bordeaux company Umanimation. Dordognethis is the name of his first video game which will be released on consoles and PC in the spring of 2023. Entirely drawn in watercolor by Cédric Babouche, artistic director of Umanimation and published by Focus Entertainment, Dordogne is an adventure game telling the story of 32-year-old Mimi, who dives back into her childhood memories by revisiting her grandmother’s house.

“It’s our biggest project and it hasn’t come out yet that it already has some visibility in the world. There is a certain expectation, rejoices Aymeric Castaing. “It must be said that it is quite new. We arrive with a cultural and graphic approach.”

Decline the universe of Dordogne

But Umanimation will not stop at video games. The company is currently producing an animated short that will tell the same story but seen by another character, in this case the grandmother, and according to a different time frame. The facts will take place forty years earlier. “We are currently financing this part. We are also in discussion to make a comic strip and thus develop the adventures of the secondary characters of Dordogne “, adds Aymeric Castaing. Dordogne will then be fully in line with its approach, namely producing additional content in a transmedia approach, using a video game engine. “Technically, all the graphics are in this game engine. We have a great story and chapters that we adapt to the content that corresponds”, explains Aymeric Castaing.

From now on, it is by the video game that the company should start its projects.

“Video games are a huge and booming market. There is room for everyone and for projects. The idea is to finance a project from the video game to then shine”explains Aymeric Castaing.

At the controls of Assassin’s Creed Mirage, Ubisoft Bordeaux is expanding on the right bank

A fundraiser in preparation

In terms of financing, the company has so far created a brand to offer solutions for professionals, such as serious games, virtual reality experiences, mobile applications. But it is now preparing a first fundraiser before considering another more substantial one at the end of 2023, the idea being to be able to release a project every two years and be serene about the future. “The transmedia approach requires synchronization with the release of a game and then six months later with other content. It takes people to work on it.” précise Aymeric Castaing.

The company created in 2017 now has around thirty employees, including a team of eight developers. “A mixed animation and video game team, says Aymeric Castaing, whose company is expanding and becoming more structured. In 2021, Umanimation acquired the Bordeaux production company UN JE NE SAIS QUOI founded by Cédric Babouche. “His wish was to use his know-how in animation to make video games. We were in the same process with complementary skills. He is a director and graphic designer, I’m more of a producer. So we decided to join forces.” explains Aymeric Castaing. UN JE NE SAIS QUOI is now the brand dedicated to content with high graphic and literary quality, while Umanimation is dedicated to new media.

The company is also working on a platform project for interactive narrative content, the idea being to be able to access all types of content (linear, video games, virtual reality, etc.) in a single environment, from any Web browser. “It would be the first green server-based cloud gaming platform. It’s a carbon footprint reduction project”says Aymeric Castaing, who has entered into a partnership with the company Qarnot computing. Umanimation presented this project as part of the call for projects France 2030 the Great Image Factory launched by the CNC and the Caisse des dépôts. The results will be known in January 2023.

FACC no longer transports expensive air through half of Europe » Leadersnet

Chapter 51 of Leandro Díaz of December 1