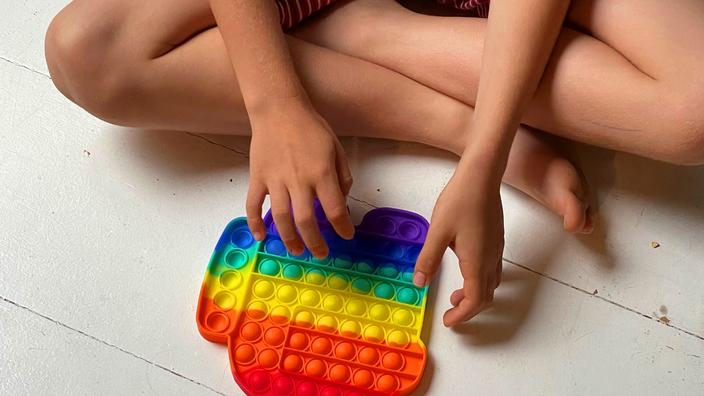 Appeared at the beginning of the year on TikTok, this stress reliever has become extremely popular in record time.

«It is an exceptional phenomenon. Raphaël Hernandez, games & toys product manager at Fnac-Darty, does not hide his astonishment. Yet accustomed to sudden and ephemeral fashions, he is surprised by the popularity of the wave of “Bubble pop” also called “Pop it”, an anti-stress which has imposed itself in all the country’s playgrounds. These silicone plates of very different sizes, shapes and colors are covered with bubbles that can be “popped” endlessly: the modern version of bubble wrap.

Read also :Post-confinement playgrounds: the comeback of the games of yesteryear

The object made its appearance at the beginning of the year on the platform for broadcasting and sharing short videos Tik Tok, very popular among teenagers. “It started from the United States, confirms Raphaël Hernandez. From March we started to have requests in stores and searches on our website have multiplied.».

This booming start created supply problems for all suppliers: “In the beginning, we were almost always out of stock. As soon as we had an arrival, he left“, We confirm to Fnac. It is only in recent days that the quantities delivered have managed to meet the demand for this object almost always stamped “made in china“. “Bubble pops” currently represent 30 to 40% of the brand’s recreational games sales and without the difficulties of refueling, “the numbers would have been doubled“. The installed brands are not the only ones to have positioned themselves on this product. Market stalls have also seen these anti-stress products flourish on all stalls.

A real utility against anxiety

These supply difficulties have paradoxically made the game even more popular. The lengthening of the waiting period, far from having diverted the interest of the French for these objects, has stirred it up. As a result, professionals expect the phenomenon to last until the end of the calendar year, with in particular renewed interest in the fall.

More than a playful gadget, the object is presented as being able to “relieve anxiety-related stress and effectively help restore mood», On an Amazon page. If she sees it above all as a fashion phenomenon, Juliette Michel, psychologist for children and adolescents, confirms that these objects can help concentration, especially auditory: “Many children and even adults like to do double duty. In addition to listening, they need a little activity that occupies their hands».

She is not opposed to some children being able to bring her to class: “it is better to spend your anxiety on a stress reliever rather than on your clothes or school stuff“. The question now is what will be the next fad. For this, all suppliers are already on social networks in order to be the first to anticipate these ephemeral successes.

SEE ALSO – Covid 19: “rage rooms” fill up in the United States to relieve the stress of the pandemic