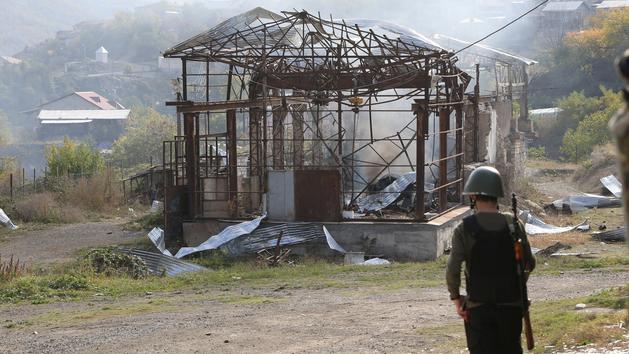 «Azerbaijan hit Stepanakert for several hours, dozens of missiles hit the city“, A senior local official, Artak Beglarian, told AFP, adding that”civilians were injured“In this attack,”the worst in recent fights“. This announcement comes the day after an attack on the Azerbaijani city of Barda, near Nagorno Karabakh, Baku accusing the Armenian army of having killed 21 people and injured dozens more. Five other civilians had been killed the day before.

Azerbaijani President Ilham Aliyev vowed to “revenge“This attack via”reprisals on the battlefield“. Armenia for its part denied having carried out the attacks on the cities of Gandja and Barda. Stepanakert has been hit by gunfire on several occasions since the resumption of hostilities at the end of September between the Azerbaijani army and Armenian forces for the control of this Caucasian enclave.

According to partial reports, more than 1,250 people including more than 130 civilians in both camps were killed in the clashes, the worst since a war in the 1990s which left 30,000 dead. Azerbaijan announced Thursday that it had handed over to Armenia the bodies of 30 soldiers killed in the fighting.

«Armenia has not shown goodwill on this matter“, But thanks to Russian mediation, she has”agreed to open a humanitarian corridorFor the removal of the remains of Azerbaijani soldiers from the battlefield, said an adviser to President Aliev, Hikmet Hajiyev. A spokesman for the Armenian Defense Ministry, Shushan Stepanian, confirmed the transfer mediated by Russia and the Red Cross, adding that Yerevan was ready to return the bodies of Azerbaijani soldiers.

The heads of Azerbaijani and Armenian diplomacy were due to meet in Geneva on Thursday, but the meeting was postponed until Friday and will not be face-to-face, the Azerbaijani foreign ministry said.