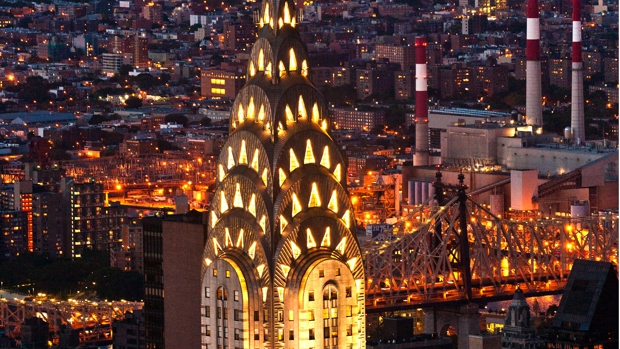 New York. At the corner of 42nd and Lexington Avenue stands a very special building. A few years ago, a committee of one hundred people, including renowned architects and historians, chose him as their favorite. It is the Chrysler Building, one of the most notable examples of Art Deco architecture in the city of skyscrapers.

But let’s go back. To the New York of the Twenties. Developer William H. Reynolds plans to build a skyscraper. He resorts to the architect William Van Allen, a student in Paris of the Frenchman Victor Laloux, one of the most prestigious architects of the Belle Epoque. Reynolds does not like sketches and they doze at a table. Walter Percy Chrysler, owner of the car company that bears his name, wants to build the tallest building in the world in the center of New York, a monument to his own figure and to capitalism.

Van Allen’s project fits his ideas and in 1928 he put on the table the 15 million dollars needed to make it happen. In the fall of that year the works began, which became a whole race against George Ohrstrom, in charge of the Bank of Manhattan, a project of H. Craig Severance, a former partner of Van Allen. Both architects hide aces up their sleeves. The initial project of the bank is 47 floors. At Chrysler you work hard. Once the foundation works are finished, four floors are erected every week. One year after the start of construction there are already seventy floors but they are below the Manhattan Bank, which has grown to 68 floors and 270 meters in height.

Van Allen does not give up. A 60-meter-high pyramid named Vertex has been secretly built inside the upper part. On October 23, 1929, with the help of a crane, they reached the pinnacle of 27 tons in just 90 minutes. In this way, with 318 meters, the Chrysler Bulding wins the race and not only becomes the tallest building in the world but also the tallest structure, ousting the Eiffel Tower. And, by the way, without any worker having died during the construction, quite an exception in the works of the time.

But this is not news. The next day, October 24, Thursday, the New York Stock Exchange crashes. And in any case the reign does not last long either. Eleven months later, work on the Empire State Building, which reaches 443.2 meters, is completed.

But the Chrysler Building is much more than meters high, as the guests at the official opening on May 27, 1930 can see. A true example of the Art Deco architectural style, the tower is distinguished by ornamentation based on hubcaps. used by Chrysler automobiles of the time. In the corners of the 31st floor, there are replicas of the radiator caps of the firm’s models from 1929, with their corresponding wings. The dome skeleton is made up of curved steel beams and the exterior is clad with thirty tons of a type of stainless steel called Enduro K2, built in Germany by Krupp and marketed as Nirosta. Walter P. Chrysler himself has chosen it for being a material that does not need maintenance. The steel plates have been worked in a workshop installed within the building itself. They were then placed in their final position, where they were welded and sealed with white lead. This Nirosta steel is also used in other building ornaments such as the gargoyles in the shape of eagles, replicas of those that culminate on the hood of the American brand’s automobiles. There are eight in all, two on each corner of the 61st floor, and they are designed by Chesley Bonestell, a draftsman friend of Van Allen. The eagles were sculpted in a separate workshop and later installed in the building on iron pedestals.

Stainless steel is also present in the spectacular lobby, triangular in shape, sharing space with African marble and granite from around the world. On the ceiling is a huge mural 36 meters long by 26 meters wide painted by Edward Trumbull that represents images of progress, transport and energy. Another feature of the lobby are the elevators. There are a total of 32 and they are all different, made with noble woods. They ascend and descend at 330 meters per minute: they are the fastest in the world. When the building was opened for the first time, it had on floors 66 to 68 a gallery of access to the public in the upper part, later replaced by a restaurant that did not work due to the serious economic situation and ended up being converted into a private club, the Could Club. On the second floor there was the private dining room of Walter P. Chrysler. On the 71st floor there was an observatory with walls decorated with stars and planets, and with ceilings from which saturn-shaped lamps hung. Chrysler itself had large offices and a showroom. Walter P. Chrysler’s private office was located on the 65th floor.

But big projects also have their great miseries. Van Allen’s fees had been set, by word of mouth, at 6 per cent of the cost of the work. But Walter Chrysler refused to pay and accused Van Allen of collecting commissions from construction companies, something he could not prove. The issue ended up in court. Van Allen denounced Chrysler and obtained an order to seize the building. In the end they reached an agreement.

In 1940 Walter Chrysler died, and five years later the observatory closed its doors to the public because it did not generate sufficient income. Starting in 1953, the Chrysler family was selling the shares of the building. Van Allen died in 1954 at age 71.

In the 1970s, the Cloud Club ended up disappearing. The new companies moved to more modern buildings and the Chrysler Building was closed. From some dark perspectives, he drew a law established in 1976 that granted tax advantages to owners of historic commercial buildings who invested in their restoration. Thus little by little, from the lobby to the upper spire, the emblematic building would recover its past splendor.

The Chrysler Building has been present in numerous artistic manifestations. On the 1993 album Bat Out of Hell II by Meat Loaf, he presides over the cover by Michael Whelan. We have seen him surrounded by a wall of water in Deep Impact (1998) or in The Fantastic Four against Silver Surfer. Submerged underwater in Steven Spilberg’s Artificial Intelligence or while Spiderman was hanging from one of his gargoyles in the first of the three Marvel hero films, just like Willy Smith in “Men in Black III” (2012).

Today if you go to New York, be sure to stop by the corner of 42nd and Lexington Avenue to see what Walter P. Chrysler called “a strong structure that praised the glories of modern times” in which without a doubt the automobile was the protagonist.

From humble origins, Walter Percy Chrysler is a true representative of the American dream. He was born in Ellis, Kansas in 1875, into a humble family. He started as an apprentice in a workshop for the Union Pacific. Very soon he went to work at Buick, one of the pioneers in the automotive world. At forty-five he is already one of the greats in the automotive world; president of Buick and vice president of General Motors. But his criteria confronts him with William C. Durant, the creator of General Motors, and he goes to the Willys Overland brand that was in a bad time. After recovering it, he goes to Maxwell Chamers, which he also takes out of the red.

In 1924 he decided to create his own brand together with three young technicians: Fred Zeder, Owen Skelton and Carl Breer. His first model is a success that the following continue. Also creates Dodge, De Soto and Plymouth. Its production was always characterized by important innovations. When Chrysler dies in 1940, his group of companies is one of Detroit’s greats.