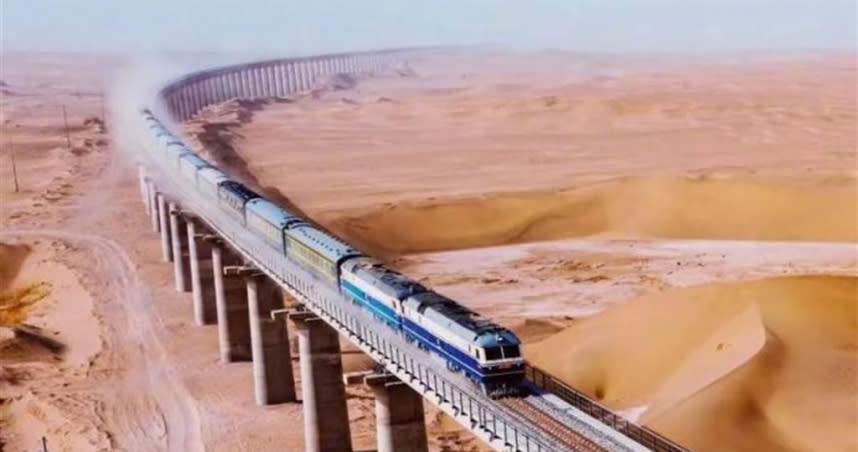 The Heruo Railway has a total length of 825 kilometers and a designed speed of 120 kilometers per hour. It crosses the Shahai Sea all the way to the east and extends to Ruoqiang County at the junction of Gansu, Qinghai and Tibet. Together with the existing Geku Railway and the Southern Xinjiang Railway, it forms a 2,712-kilometer circular railway, “encircling” the Taklimakan Desert.

This national I-level single-track railway connects the dots of oases in the desert, ending the history of five counties in the southern margin of the Tarim Basin, including Qiemo and Minfeng, and three mission fields of the Xinjiang Production and Construction Corps being blocked by trains.

More than 1,000 tickets have been sold out quickly since the Heruo Railway tickets went on sale at 12:00 on the 15th. Patiguli Yasen, a passenger who often travels between Hotan City and Qiemo County, shook his ticket and said that in the past, he could only go to Qiemo by bus, but now it is convenient and stable to travel by train, which can save two or three hours.

Facing the inaccessible desert, the builders simultaneously promoted the sandstorm protection project and the railway construction. A large number of greenery were planted along the Heruo Railway. In the extremely severe sandstorm area, 5 sand-crossing bridges with a total length of nearly 50 kilometers were built by using bridges instead of roads. , reduce the threat of wind and sand to the railway.

“The Heruo Railway has once again proved to the world that China has the confidence and ability to run the railway smoothly in the desert,” said Yang Baorong, chief designer of the China Railway First Survey and Design Institute Group Co., Ltd. Heruo Railway.

“The desert-circle railway opens up new channels for people and logistics. The rich products and tourism scenery along the line will come into view of more people, and promote the economic prosperity of Xinjiang, especially the southern Xinjiang region.” Ya Ru site, Andil ancient city and other places bring more tourists and promote the development of local tourism.

By the end of 2021, the operating mileage of Xinjiang railways will reach 8,151 kilometers. Xinjiang has initially formed a traffic pattern of “one main and two auxiliary” with Lanxin Railway and Lanxin High-speed Railway as the main channel, Linhe-Hami Railway as the north channel, and Geku Railway as the south channel. “Regional Hub”.

See more CTWANT articles
The figure exposed before the incident of the 8 relatives who burned 8 relatives!The store owner revealed: He said he was not happy staying at home
Lu cuts $36.2 billion in U.S. debt in April to the lowest level since June 2010
30 days to 1 year “Kimura Flower Incident” Japan Congress Amends Law to Severely Punish Cyberbullying

Haaland was shocked by his height

Message to the party congress to share a new vision?-News Center-Northern Network