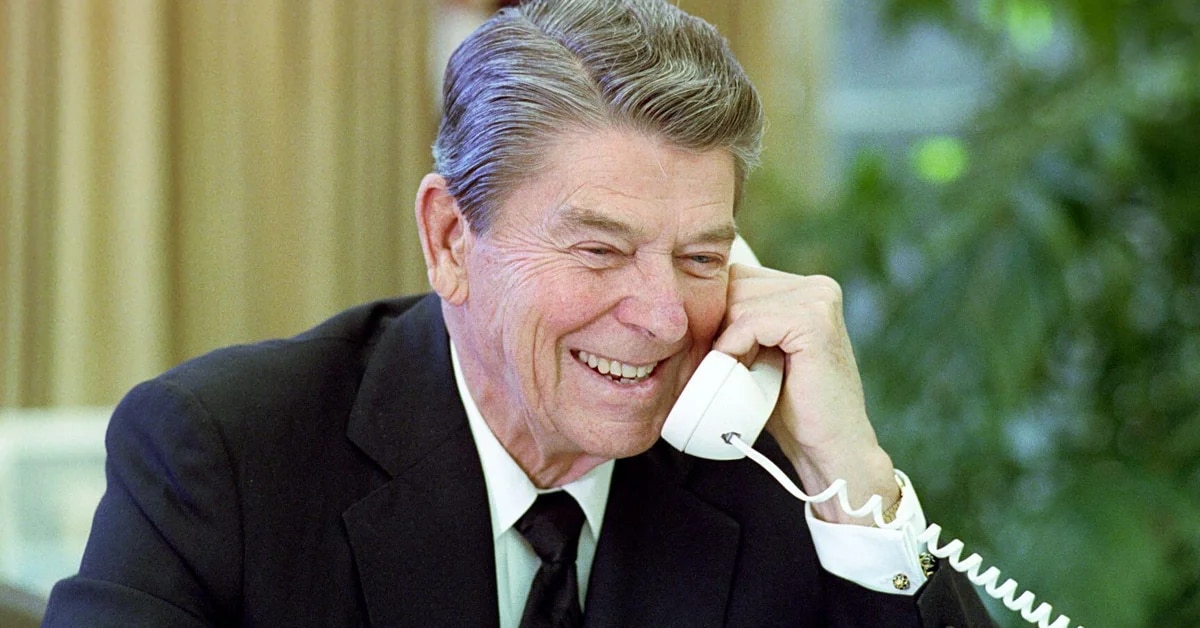 as a sound check, he launched a tremendous joke against the Soviet Union. The scandal was capital (Maidun Collection)

And one day we almost went to nuclear war for a joke of Ronald Reagan. The skid could have cost him more than what it cost him, a string of criticism in the United States, declarations of repudiation abroad, contempt on the part of the USSR and a lot of embarrassment from others that, if he had had it, would have made him meditate at the time President of the United States in the perhaps inspiring shadow of the legendary Oval Room of the White House.

Shame on others, Reagan, nothing: he was in his third year in office, he was planning his re-election, which he would get in November of that year; he had miraculously saved his life on March 30, 1981, two months and ten days after being sworn in, when John Hinckley fired his 22 caliber pistol six times at the President because he wanted to dazzle the actress Jodie Foster; he led the so-called conservative revolution, along with pope John Paul II and the British Prime Minister Margaret Thatchera revolution that sought, and would obtain, the discredit and fall of communism in Eastern Europe, especially in the Soviet Union. Reagan was riding the crest of a wave, he could afford a joke.

Jokes allowed himself several and very often. Especially, harsh jokes against the communist system. There was one that he used to repeat enthusiastically. Three puppies are found, one American, one Polish and one Russian, both visiting the United States. The American dog explains to his peers how things work in his country: “Look, I bark and bark and in the end, someone always gives me a little meat.” And the Polish puppy asks: “What is meat?” And the Russian asks: “What is barking?”

This is how the guest of the White House spent them, with a very easy laugh and a lion to manage the resources that Hollywood had given him in his years as an actor. the guy was not Marlon BrandoHe didn’t need to, but he had learned something. On the day of the attack, he had told the doctors at George Washington Hospital that they were going to save his life: “I hope they are all Republicans”. And, in the intensive care unit, with the bullet no longer within millimeters of his heart, he gave his wife Nancy: “Sorry, dear, I forgot to bend down”, which was what Jack Dempsey he had told his wife after losing his fight with Gene Tunney.

Ronald Reagan miraculously saved his life on March 30, 1981, two months and ten days after being sworn in, when John Hinckley fired his 22-caliber pistol six times at the President because he wanted to dazzle actress Jodie Foster (AP)

Reagan had another practical joke in his arsenal.. Before his messages, radio or television, when they asked him for a sound check, he would release a nonsense as big as a pine tree, which aroused the hilarity of his people but put the United States in trouble. In 1982, minutes before announcing a series of measures against the pro-Soviet Polish government led by General Wojciech Jaruzelski and who faced the legendary syndicate Solidarity by Lech WalesaReagan was asked for a sound check. Reagan took advantage and called Jaruzelski and his government, “a band of vagrants, useless and criminals”. The phrase was broadcast by NBC, aroused the ire of much of the world, especially the Polish government as is easy to imagine. Since then, the press and the White House have verbally agreed not to publicize the President’s jokes and take them as “off the record”, the journalistic code that prevents the publication of a statement said under that umbrella. Reagan’s were not “off” statements at all, but the President had to take care of his own humor.

As is often the case in these cases, Reagan bet higher. On August 11, 1984, thirty-eight years ago, Reagan teased an eventual American bombing of the Soviet Union. It was another joke. but too heavy. Reagan used to record a weekly speech for public radio and that Saturday, August 11, the middle of summer, he was already installed in his Rancho del Cielo, his Californian villa, a State of which he had been governor and that had paved his arrival at the Casa White. A team from National Public Radio arrived there to record what would be the last presidential speech until September, when everyone returned to work.

Reagan had something important to announce.. It was the signing of a law that allowed students from religious associations to meet in secondary schools during breaks or after classes, something that other groups of young people from secular associations had already put into practice, but which was prohibited. to the confessional institutes for the separation between Church, State and School. The written speech Reagan was to read began: “Fellow Americans, I am pleased to announce that today I signed legislation that will allow religious student groups…” Before recording it, with the microphones on and the recorders running, the technicians asked Reagan for a sound check. And the president said: “Compatriots, I am pleased to announce that today I signed the law that will ban Russia forever. We’ll start the bombardment in five minutes.”.

Ha-ha-ha, ha-ha-ha, everything is between us. But no, the National Public Radio signal, broadcast from the Rancho del Cielo, was being sent at that time to thousands of other stations for later broadcast. Many of those radios, instead of deleting the sound check, kept it in their files. And many, unaware of the tacit agreement between the Washington press and the White House to take Reagan’s jokes “off the record,” made it public. The next day the newspapers reproduced it and the scandal was enormous and unstoppable.

The USSR was at that time in the hands of Konstantin Chernenko who was going to die in power seven months after Reagan’s little joke, in March 1985: the renewing winds of Mikhail Gorbachev were coming (Wally McNamee/Corbis via Getty Images)

In the USSR, the apparent cold calm with which the joke was taken contrasted with what, according to a cable decoded by the United States secret services, the Soviets had considered the possibility of attacking American forces stationed in Europe. The official Tass agency published an official statement regretting Reagan’s words, “of unprecedented hostility towards the USSR and dangerous to the cause of peace. This conduct – added the official text – is incompatible with the great responsibility that weighs on the leaders of the States, especially those of the nuclear powers, for the destinies of their own peoples and of humanity”. The agency questioned “Washington’s pacifist rhetoric. President Reagan’s latest candor should serve as an eye opener.”

The newspaper Pravdathe organ of the Central Committee of the Communist Party of the USSR, published a lengthy analysis of the Reagan nuclear joke, signed by its then main columnist, Yuri Zhukovwho stated that Reagan “had missed what is constantly in his head, but what he was forced to keep silent about because of his election campaign.”

The idea that Reagan had put his most intimate thoughts into words, alluding to the Freudian idea of ​​humor, also caught on in communist Germany. In Bonn, the spokesman for the government of the German Democratic Republic, Peter Boenischsaid: “There’s no reason to smile at the US president’s nuclear joke. Our government reserves the right to give the worst fate that can be given to a joke: not to continue telling it.

The United States called the Soviet reaction “disproportionate” and called Tass’s cable “propagandistic purposes.” Both parties, who knew the efficacy of political humor, had been somewhat right. And neither of them had it completely. The USSR was at that time in the hands of Konstantin Chernenko that he was going to die in power seven months after Reagan’s joke, in March 1985: the renewing winds of Mikhail Gorbachevbut equal PC humor used to caricature Reagan in a big cowboy hat, with an olive branch in one hand and a nuclear missile in the other.

Reagan’s rival in the November elections of that year, just three months after the scandal, was Walter Mondale, who immediately reacted in an electoral spirit, but with some caution: “A president has to be very, very careful with his words. I am willing to accept that he did it as a joke. But some may think that it is something very serious. I don’t think it’s very funny”.

Reagan swore that some of his bloody jokes about the USSR had been told to Gorbachev, already Secretary General of the CP of the USSR, with whom he had a very good relationship (AP)

None of this discouraged Reagan, who was re-elected in November, from stopping making jokes about the USSR. He told, with delight, another story that painted the proverbial bureaucracy and slowness, apathy and disinterest that he claimed reigned in the Soviet Union where, to buy a car, you had to pay the money up front and wait ten years until the car was delivered to you. That’s what a Soviet citizen does, he goes, hands over the money, and the salesman says, “Okay, come back in ten years and we’ll give you the car.” “In the morning or in the afternoon?” asks the buyer. “Listen –says the salesman in a fit of pious sincerity– it’s in ten years. What does it matter if it’s morning or afternoon? And the other answers: “That’s the day the plumber comes home.”

Reagan swore that some of his bloody jokes about the USSR had been told to Gorbachev, already secretary general of the CP of the USSR, with whom he had a very good relationship. He said that the leader of glasnost and perestroika had laughed a lot with the story that described an American and a Russian talking about life in the two countries. “In the United States,” said the American, “any citizen can go to the Oval Office, slam his fist on the desk and say to Reagan: Mr. President, I absolutely do not agree with how you run the country.” And the Russian: “Same as in the Soviet Union.” “What are you telling me!” says the American with legitimate mistrust. “Of course! – answered the Russian – here any citizen can go to the Kremlin, punch Gorbachev’s desk and tell him: Comrade Secretary General, I absolutely do not agree with how Reagan manages your country”.

Reagan said that he had a collection of jokes about the USSR that the citizens of the USSR themselves told each other. It is unlikely that the President himself picked up the popular humor of the USSR, if it existed at all. Recent declassified CIA documents speak of a collection of humor from the Russians about themselves and from the Russians about the United States. That was the fountain where the president was drinking.

Two years later that wall was torn down and Germany was unified. The USSR ceased to exist on December 26, 1991.

Spies, tapped phones and two tenacious journalists: this is how the Watergate scandal began 50 years ago
Man who shot Ronald Reagan to be freed after 41 years