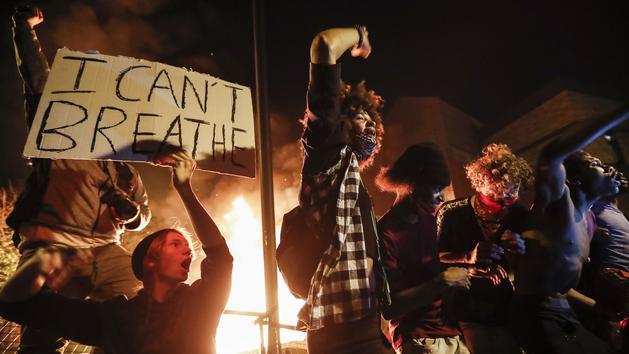 Protests led to a riot in Minneapolis, Minnesota for the fourth consecutive night since the death of George Floyd during his arrest by city police. Thousands of people, gathered to demand justice, torched cars and shops and beat the police with stones. The rioters invested and burned the police station of 3e district, closest to where George Floyd was arrested. The buildings had been evacuated by the police. Stores were vandalized and a supermarket looted in Minneapolis and the twin city of St. Paul, which is also the state capital.

President Donald Trump responded Thursday evening with a message on Twitter, warning the looters and warning that steps would be taken to restore order. “I can’t stay indifferent watching what happens in a big American city, Minneapolis“Wrote Trump. “A complete lack of direction. Either the very weak radical left mayor, Jacob Frey, pulls himself together and regains control of the city, or I send the national guard and do the job properly. These thugs dishonor the memory of George Floyd, and I won’t let that happen. I just spoke to Governor Tim Walz and told him that the military would support him until the end. At the slightest difficulty, we will take control, but when we start to loot, we start to shoot. Thank you!“

Minnesota Governor Tim Walz mobilized the National Guard on Thursday afternoon and declared a state of emergency. Five hundred soldiers were deployed to the field. Walz said that he supported peaceful protests, but that the destruction committed justified further steps to maintain order. “Unfortunately, some people have engaged in illegal and dangerous activities, including arson, riots, looting, and damage to public and private propertySaid Governor Walz in his proclamation. “These activities threaten the safety of legitimate protesters and other residents, and rescuers and protesters have already been injured.A curfew was also declared Friday evening.

A state of emergency has also been declared in St. Paul and Minneapolis. The Capitol of St. Paul, the seat of the State Assembly, has been evacuated for security reasons. Public transportation was suspended until Sunday, and many stores closed. Protests spread to other US cities on Thursday evening, including New York, Denver, Albuquerque and Portland, Oregon. Rallies had taken place the day before in Los Angeles and Memphis.

But peaceful protests continued alongside the riots to demand justice. “Please stay at home. Don’t come and demonstrate. Keep in mind George Floyd and the goal of our movement, which is to prevent this from happening again», Called on Twitter the black mayor of Saint-Paul, Melvin Carter. Jacob Frey responded to Trump’s message that “weakness is refusing to take responsibility for one’s own actions” and of “point the finger at someone else in times of crisis” Frey, who is white, had called for calm the previous days and explained that the “sadness and anger are not only understandable, but just“

A passerby films a terrible video, where we see Floyd, hands tied behind his back, pressed to the ground against the wheel of his vehicle

George Floyd, 46, was arrested at 8:00 a.m. Monday night on a busy street in central Minneapolis. Police, alerted by a merchant who had reported concealing counterfeit money, arrested Floyd while he was in his car, parked along the sidewalk. Surveillance cameras show him being handcuffed without resisting. A small crowd forms. A passerby films a terrible video, where we see Floyd, hands tied behind his back, pressed to the ground against the wheel of his vehicle. One of the policemen keeps his knee on his neck, and weighs with all his weight. George Floyd, his face pressed against the asphalt, groans, and repeats:I can’t breathe, I’m going to die.The spectators ask the police to let him breathe. When the grievor removes his knee, Floyd lies inanimate. He is transported by ambulance to the hospital, where he is pronounced dead.

White police say Floyd resisted the arrest and do not say they kept him on the ground for long minutes. The video, posted on social media, has since gone viral, and has sparked protests across the United States.

The four police officers involved were removed from their posts. Derek Chauvin, the one who pressed his knee against George Floyd’s neck, had been the subject of eighteen complaints, only two of which were the subject of sanctions, in this case letters of reprimand. On Friday, he was finally arrested and charged with manslaughter. Another police officer had also been the subject of complaints, including for excessive use of force. Two investigations have been launched, one by the State of Minnesota, and the other at the federal level. There is currently no way to say whether these measures will be enough to calm the spirits. The demonstrations quickly resumed on Friday afternoon in Minneapolis and Saint-Paul, but also in many other American cities, such as New York, Atlanta (Georgia) or San Jose (California) or Washington DC. The situation was particularly tense at the start of the evening around the White House, which was quickly placed in confinement (lockdown).