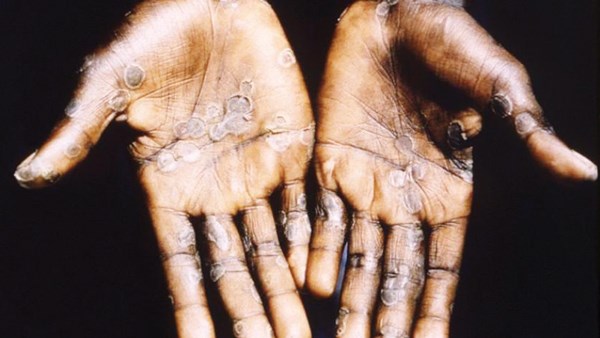 The Emirates Corporation for Health Services has informed all its health facilities of the need to investigate monkeypox disease, and the need to report any suspected, potential or confirmed case, in the context of ensuring the control and prevention of communicable diseases, based on precautionary and preventive measures.
The Foundation stressed the readiness of its health facilities and the readiness of its medical staff to respond to public health emergencies, to ensure the protection of society and the preservation of public health.
The Foundation recommended that all doctors and health personnel immediately report confirmed or suspected cases to public health centers, noting that monkeypox is a rare viral infection that does not spread easily between people and is usually a mild and self-abbreviated disease, and most people recover within a few weeks. .
She stated that infection may spread when a person is in direct contact with an infected person, although there is a very low risk of transmission to the general population.
On the seventh of May, a case of monkeypox was confirmed, and 7 confirmed cases and 1 suspected case were monitored in the United Kingdom, without any clear element between the cases, and Portugal recorded 5 confirmed cases and 8 cases in Spain.
The Emirates Foundation for Health Services explained that the symptoms of monkeypox are similar to the symptoms of smallpox, syphilis and other diseases with a rash, noting that monkeypox is mostly transmitted to humans through direct contact with fluids or the blood of an infected animal, and it is also transmitted from Human-to-human contact with body fluids, respiratory droplets, and contaminated surfaces. She emphasized that early detection and control of the spread of infection are effective ways to reduce monkeypox infection.
The Foundation has identified 4 preventive methods and measures to reduce the risk of transmission of infection from one person to another, which are: avoiding physical contact with infected persons, avoiding contact with animals that can carry the virus, as well as using personal protective equipment when caring for the injured, in addition to washing hands with soap and water or Using an alcohol-based hand sanitizer.
The Foundation stated that the signs and symptoms of the disease are fever, muscle pain, headache, lymph gland enlargement, and rashes, pointing out that monkeypox is a self-limited disease and its symptoms last for 14 to 21 days.
The World Health Organization defines the suspected case as a person who develops an acute illness that causes a fever, leading to a temperature of 38.3 degrees Celsius, severe headache, lymphadenopathy, back pain, muscle pain and severe weakness, followed by a day to three days rash. It develops gradually, often beginning on the face (the thickest), and then spreading to other parts of the body, including the soles of the feet and the palms of the hands.
As for the probable case, according to the definition issued by the Dubai Health Authority, it is the case that meets the definition of a clinical case, and is not laboratory confirmed, but has an epidemiological link to a confirmed or probable case. As for the confirmed case, it is a clinically compatible case that has been laboratory confirmed. The US Food and Drug Administration approved the first monkeypox vaccine in 2019.
A single copy of monkeypox can be fatal, and may kill up to 10% of those infected. But the nature of current infections in Britain is “more moderate”, and the disease is controlled within two to four weeks, and the people most susceptible to infection with this disease in West or Central Africa were usually animals.

The career of the Egyptian star, Yasmine Sabry, before fame and wealth, will shock you and surprise you in her academic qualification, which is hidden from everyone!