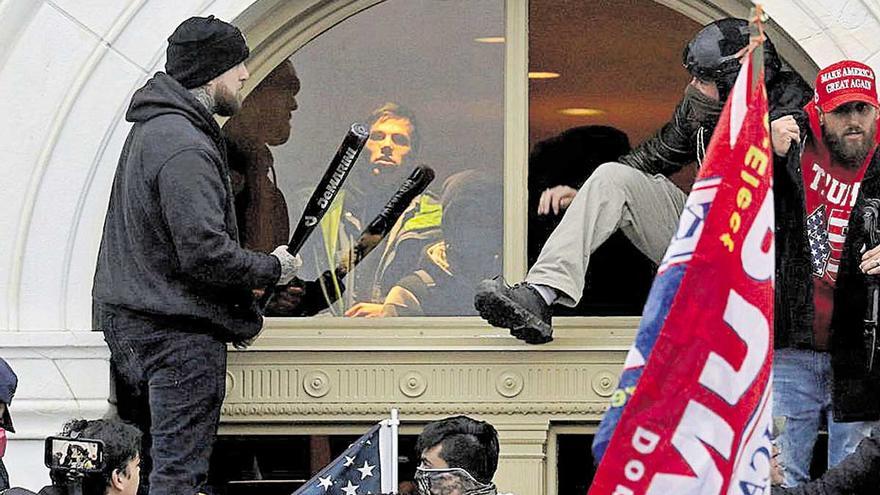 Pro-Trump protesters outside the Capitol on January 6.
REUTERS

Aquilino Gonell, a U.S. citizen nationalized immigrant from the Dominican Republic, Capitol Police sergeant and military veteran, he thought on january 6 what he had never felt when he served in the Iraq war in the uniform of the United States: “That he was going to die”. Your colleague Harry Dunn never in his 14 years in the body had he been insulted with the worst racist epithet in the United States, “niggerWhile wearing the uniform; never until that Wednesday. Michael Fanone, from the Washington Police Department, was beaten, electrocuted and called a “traitor” and before he suffered a mild heart attack and was left unconscious for four minutes he heard someone say: “kill him with his own gun”. Your partner in the metropolitan police Daniel Hodges, who received a beating with his own mask and with his truncheon while trapped between a door and the assailants, feared it was going to be “lynched by the massWhile being beaten.

The four law enforcement officers were in the Capitol when the assault occurred in an attempt to stop the certification of the results of the November presidential elections in which Joe Biden won and Donald Trump lost. Their testimonies have opened this Tuesday in the Congress of the United States the first session of the “select committee “ created by the president of the Lower House, Nancy Pelosi, to investigate that insurrection, a panel that was born as an alternative after the Republican blockade to form an independent commission similar to the one that investigated the attacks of September 11, 2001 and that you will develop your work marked and burdened by deep division and polarization politics that prevails, as in the rest of the country, on Capitol Hill, as happened in the committee created by the Republicans that investigated Benghazi.

Two of the agents who were in the Capitol that day hugged each other this Tuesday before testifying. EFE

Republican minority leader Kevin McCarthy withdrew the five congressmen he had chosen to the committee when Pelosi rejected two of them, claiming they have kept alive. Trump’s “big lie.” over a nonexistent electoral fraud. Finally only two Republicans sit on the committee at Pelosi’s invitation: Liz Cheney y Adam Kinzinger, two of the few conservative voices that have risen to forcefully denounce Trump’s actions and the protection that the party has given him and have therefore been repudiated and punished for the training.

Cheney has not been cowed by the ostracism to which her party relegates her. On the contrary, he has taken advantage of his initial statement this Tuesday after that of the chairman of the committee, Democrat Bennie Thompson, to make another forceful denunciation of the events (for which Trump was subjected to a second impeachment of which he was acquitted) and to point out again to the responsibility of the former president. “We cannot leave without investigate the violence of January 6 and its causes”Said the Wyoming representative and daughter of former Vice President Dick Cheney. “Too we need to know what happened every minute of that day at the White House, every call, every conversation, every meeting before, during and after the attack “, he added, also ensuring that”Honorable men and women have an obligation to step forward”.

Kinzinger, who has touched tears at various times during his interrogation of the four agents, has also questioned his fellow ranks for having constructed an “alternative narrative to discredit the process” opened in the Lower House according to which a a similar committee to investigate the protests and episodes of looting and violence that took place last summer in the US after the murder by the police of George Floyd. Kinzinger, who was at those protests as a member of the National Guard, has made clear the gulf that separates the two events and the demagogic ruse of the Republicans. “I condemn those protests but I never felt that the future of self-government was threatened as I felt on January 6, “he said. “There is a difference between breaking the law and rejecting the rule of law; between a crime, even serious crimes, and a blow”.