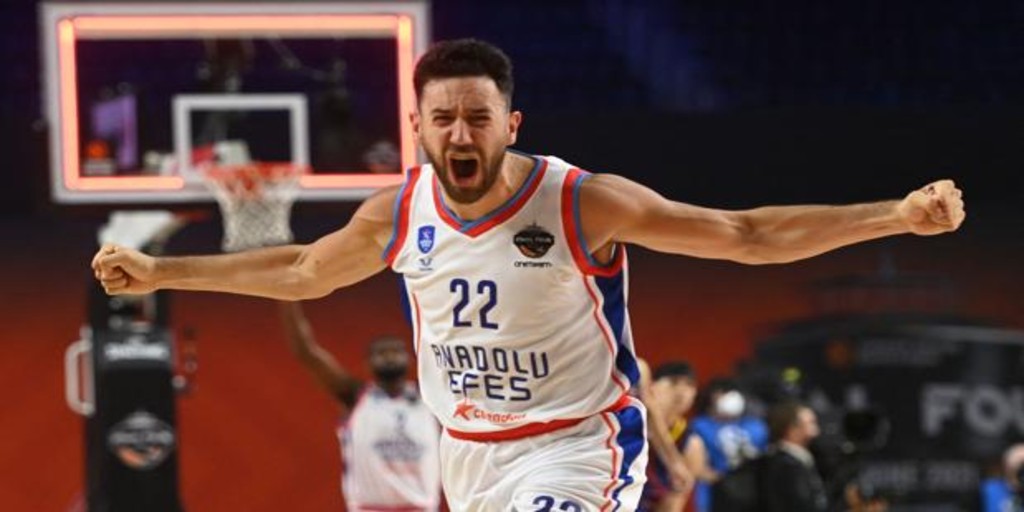 The clubs of the Euroleague they began to celebrate the renovations like a triumph. Retaining their figures had become a nightmare for them, unable to fight against the glamor and economic might of the city. NBA. For this reason, the presence in this start of the competition of stars such as Micic, Larkin, Mirotic o Tavares reaffirms the appeal of a tournament that raises the curtain today with its first matches of the season, including the duel between the Real Madrid and the champion, the Anadolu Efes.

In a strangely quiet summer for Euroleague teams, the Whites have been one of the teams to have been hit once again by the growing exodus of talent heading to the NBA. He’s gone Garuba, although the pivot had not yet reached the status of essential for Laso. The pivot has been one of the few players who have crossed the Atlantic this summer and alongside him have been the Argentine Bolmaro or the israeli Advija. All of them great promises, but far from being a true benchmark for their teams. Yes it was Kevin Pangos, the undisputed leader of Zenit and one of the dominators of the competition last season. His is the great loss of a Euroleague that has kept the bulk of its stars and that many of them seemed to already have a one-way ticket to the NBA after finishing the Final Four.

It was the case of Vasile Micic, who everyone placed in the Thunder, or that of Shane Larkin. Both flirted in the summer with their departure, but have finally decided to stay to try to give Efes their second consecutive title. The Turks are the great favorites to repeat joy, but in front they will have a group of aspirants with many options to overthrow them.

In addition to Real Madrid, who will be measured today at the WiZink Center (20.45 hours), son Barcelona, ​​CSKA Moscow or Armani Milano those who have better wickers to face Ataman’s team. A champion who has only made one change with respect to the squad that was proclaimed champion in May. The young pivot has arrived at the locker room Petrusev after the departure of Sanli al Barça. A signing with which the Catalans hope to make the final leap to reach the title. Trophy that has resisted them since 2010 and that last season they escaped in the last game. “We have learned from last year’s final and we are going to try to minimize those mistakes for which we could not win the Euroleague”, explains Oriola, captain of Barcelona, ​​in statements to DAZN, a platform in charge of offering all the games live.

After a season plagued with problems, it seems that Real Madrid have returned to their usual stability of recent years. The unexpected marches of Campazzo and Deck to the NBA, which left the team very weakened in the last stretch of last year, have caused a very important revolution in the white team, much more physical now with the arrival of Yabusele, Williams-Goss of Hanga. Transfers that balance the squad and that return to Madrid the group of applicants where they were not last year due to injuries.

It has been CSKA that has hunted one of those stars who has preferred to continue in the Euroleague and not make the leap to the NBA. Is about Aleksei Shved, what leaves the Khimki to try to make forget Mike James on the other team in town. A flashy signing to try to bring the Euroleague back to Moscow.

In Milan, where Sergio Rodríguez continues under Messina’s command, the project has been consolidated, keeping a Shavon Shields on the squad who finally found no place in the American league. The Italians want to be the alternative to the usual giants and for this they have added Jeriant Grant, one of those good players who do not shine in the NBA and who have taken the leap in search of prominence.

OJ May (Unics Kazan), Shabazz Napier (Zenith) o Costas Antetokounmpo (Asvel) are other aspiring stars from the NBA who have landed in a Euroleague capable of gathering talent this time instead of losing it. Also, come back Mike James after their abrupt departure from CSKA and the Nets, with the aim of leading Monaco, one of the new teams in the continental tournament.

The Euroleague will not be easy for Baskonia, who despite the reinforcements of Baldwin o Fontecchio They still seem one step behind the big favorites to be in the Final Four to be played in Berlin at the end of May.

Anadolu Efes: His great achievement has been to maintain the block that made him champion, with Micic and Larkin as leaders, and he has added promising center Petrusev to it. It is the big favorite to win

Barcelona: He has lost some of the bench background (Claver and Hanga have left), but he still has a scary team with Mirotic, Higgins, Calathes and Davies and the signing of Sanli

Real Madrid: The revolution has been good for the Whites, who have gained muscle with the arrival of Yabusele, Hanga or Vicent Poirier. To calibrate the options of Laso’s team, we will have to wait for the return of Thompkins and Randolph, key players who are still out due to injury

CSKA Moscú: Always among the favorites, the Russian team has signed one of the Euroleague stars this summer. A Shved that in Khimki was a gale and that must now lead the Moscow giant to a new Euroleague title