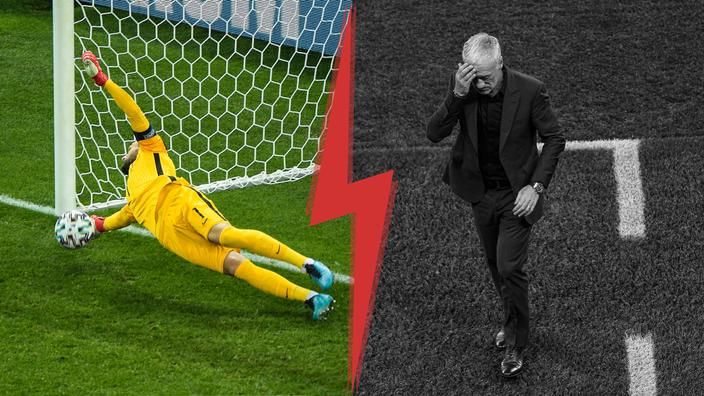 DECRYPTION – Find the good and bad points awarded by the journalists of the Figaro, present in Bucharest during the elimination of the Blues against Switzerland in 8e Euro final.

Fabulous Nati
You should have seen the ecstatic joy of Yann Sommer, the Swiss goalkeeper turned national hero after pushing back the shot on goal from Kylian Mbappé on Monday evening at 12:44 am. His teammates on the trail, the goalkeeper of Borussia Mönchengladbach rushed directly towards the corner of the National Arena where the 627 Swiss supporters were massed for a sublime communion. A celebration as unexpected as it was magnificent for this country which was breaking its teeth in the round of 16 in every major competition since the 2014 World Cup. Led by their exemplary captain Granit Xhaka, the tireless Zuber and the Seferovic clinic, the Swiss achieved a great game and deserve their qualification. Despite the penalty rejected by Lloris, they always believed in it, even when they were down 3-1 with ten minutes remaining. “In my opinion, we were the best teamXhaka said. Difficult to prove him wrong. Spain, their opponent in the quarterfinals, is warned.

LLoris, the end of hope
He could have been the hero of the Blues. The story would have been beautiful. Missed. With his penalty stopped at 55e minute of play – first stop in this exercise in selection since 2012 – the goalkeeper of the world champions had done the job and thought the hardest behind him with the double from Benzema and the jewel of Pogba. It was without counting on the resilience of the Nati and a penalty shootout in which he was never able to stop the bleeding. “The regrets we can have is certainly that we could have managed a little better at 3-1, he planted at the end of a nightmarish evening. In the past, our strength has been to be a safe, a solid team that gives nothing to the opponent. Tonight, we left them in the game … This goal in the 90th minute hurts a lot … Despite that, we did not give up in overtime. We went to the end of the end ”.

Deschamps got it wrong and got it wrong
It’s very simple, we did not recognize Didier Deschamps during this Euro. He went through the competition in the costume of a Sunday handyman, in search of the best formula… which he never knew how to find. So where has the experienced technician gone, sure of his strength and guided by a strong idea as in 2018? Blinded by the desire to put his three attacking stars in the best possible conditions, he has come to destabilize the entire blue edifice with its incessant changes in the game system (three in four matches). For a catastrophic result. Like his players, he too must question himself this summer. Its sinking is total.

From 3-1 to 3-3, the big mess of the Blues
Observers can blame him as much as they want for his multiple system changes which have destabilized the entire French edifice, Didier Deschamps will remember one thing above all: ten minutes from the end of the match, his players were leading 3-1 after his adjustments have been made. An advance that the world champions squandered. And since this is not the habit of the house, “DD» could curse: “this is where we can have regrets, ten minutes from the end. It would have been better to manage this advantage of two goals“. A loose marking of Kimpembe and Varane in front of Seferovic (80e), a virile but correct load from Shaqiri on Pogba then Seferovic, again, which mystifies Kimpembe (90e). This is how the Blues ruined everything when Lloris had saved them hell. A great mess.

SEE ALSO – “My heart is heavy”: the tears of French supporters after the elimination of the Blues from Euro 2020