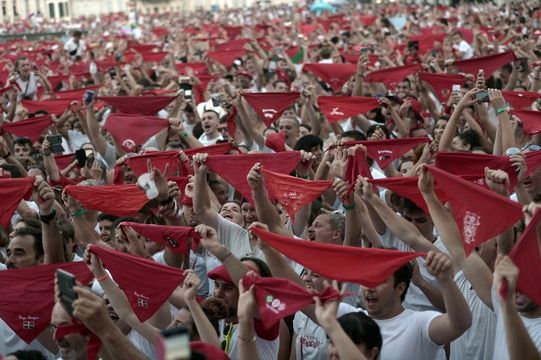 The Fêtes de Bayonne, one of the largest festive gatherings in Europe which attracts nearly a million people at the end of July for five days, will not take place this year, for the second consecutive summer, due to the health situation linked to the coronavirus, the mayor of the city announced on Wednesday.

The festivities “are impossible to organize” as long as “collective immunity is not guaranteed, told AFP the mayor (UDI) Jean-René Etchegaray. People need to come out and we would have witnessed irrational behavior. “

Various cultural events in the summer

After a meeting of elected officials, of the commission bringing together the actors of the party, of the sub-prefect of Bayonne, a “consensus” emerged, and Jean-René Etchegaray announced the cancellation to the press “with death in the soul. “. He said not to bet on a postponement of the Holidays in 2021, but various cultural events in the summer, “to bring people in and still support our merchants”, because the Holidays are “not just a date. -vous festive, social, it is also a major economic meeting ”.

The Fêtes de Bayonne (Pyrénées-Atlantiques), which were scheduled from July 28 to August 1, are a gigantic popular festival, which drains each summer up to a million “festayres” (“party people” in Gascon) dressed in red and white in the crowded streets of the city, between cultural events, sports, concerts, bullfights, gastronomic competitions.

At the beginning of April, after the last restrictions announced by Emmanuel Macron due to the health crisis, the city of Dax (Landes) had also decided, like last year, the cancellation of its feria scheduled around August 15, and which attracts several hundred thousand people. Dax however hopes to maintain bullfights, with a reduced gauge. Nîmes, another bullfighting stronghold, for its part announced in early April the cancellation of its Pentecost feria, one of the most important in France, which was scheduled from May 27 to June 1, hoping to be able to organize its harvest fair. , mid-September.

See Also:  21 registered cases of infection after the outbreak in Lillehammer