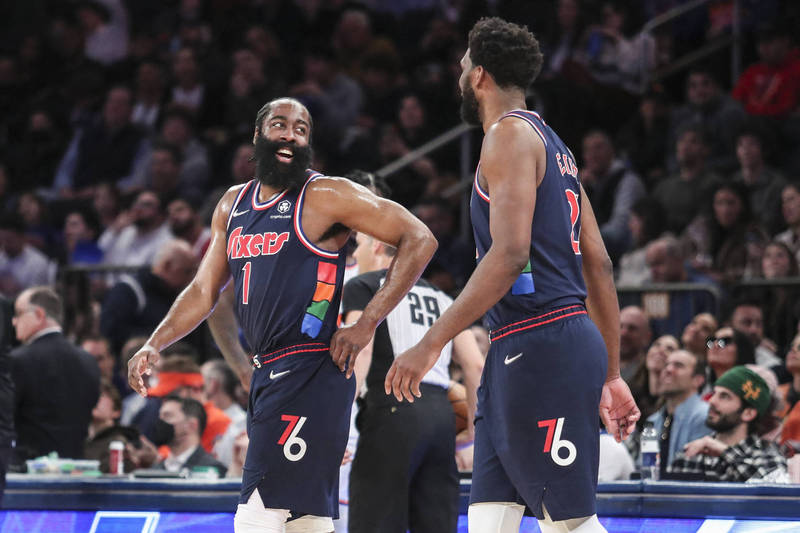 [Sports Center/Comprehensive Report]The 76ers kicked the Nicks today, and James Harden, “the bearded”, continued to be hot after the transfer. He scored 29 points, 10 rebounds, and 16 assists today, setting an unprecedented record , and Joel Embiid’s 37-point bet, the two led the team to a 125-109 victory over the Knicks and won their 3-game winning streak.

Harden and Embiid scored 35 points in the first half to help the team build a 9-point lead. After the easy basket, the Nicks started a chasing offensive at the end of the third quarter, and the Sixers entered the decisive quarter with a 2-point lead.

In the deciding quarter, the two sides fought to a 100-100 tie, and then the Seven or Sixers relied on Embiid to stand on the free throw line frequently to score points and take the lead. Teammates Harden, Tyrese Maxey, T. Harris (Tobias) Harris) also played a role, teaming up to expand the point difference to a double-digit lead and successfully closed the victory.

Although Embiid only made 7 goals in this campaign, he made 23 free throws and set a career high. He scored 37 points and 9 rebounds. Harden scored 29 points, 10 rebounds and 16 assists. According to StatMuse statistics, Harden became the first player in history to score at least 25 points and 10 assists in the first two battles of the new team, creating an unprecedented record, while Maxi scored 21 points.

He is the first player in NBA history with 25p/10a in his first 2 games with a new team. pic.twitter.com/LS7xM8FzJv