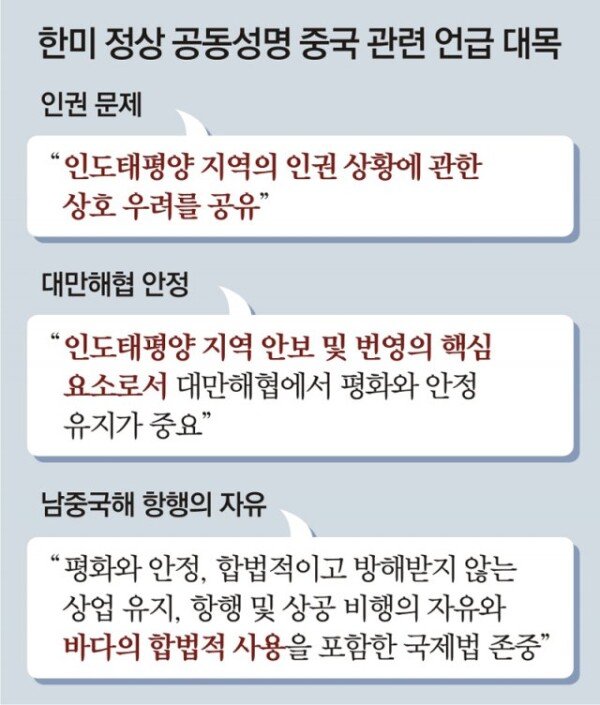 After the Korea-U.S. summit, Korea-China relations

In a joint declaration issued by President Yoon Seok-yeol and US President Joe Biden on the 21st, the human rights issue, which China has strongly objected to as interference in its internal affairs, appeared for the first time. The two leaders shared their mutual concerns regarding the human rights situation in the Indo-Pacific region and made a commitment to promote human rights and the rule of law throughout the world. Although China is not mentioned, it is interpreted that the human rights situation in Hong Kong has deteriorated since the enforcement of the Hong Kong National Security Law in 2020, as well as China’s oppression of ethnic minorities in Xinjiang and Tibet. This is something that was not included in the joint statement between the US and South Korea leaders during the Moon Jae-in administration last year.

Human rights issues were newly included after the leaders of the Republic of Korea and the United States agreed to cooperate in high-tech supply chains that effectively exclude China, and the issue of Taiwan and the South China Sea was also mentioned again after last year, and China protested the next day. At a press conference on the 22nd, Foreign Minister Wang Yi said, “The US Indo-Pacific strategy is to make Asia-Pacific countries pawns to US hegemony.”

Although the government does not expect any visible retaliatory measures immediately, the government is keenly aware of the possibility that China will pressure it by saying, ‘Do not touch your core interests’ or ‘Are you going to give up China’s huge market?’ Reestablishing South Korea-China relations while convincing China of the new principles of the ROK-US alliance, which encompasses not only military security but also economic, high-tech, and supply chain cooperation, has emerged as the Yoon Seok-yeol administration’s biggest diplomatic task.

In the joint declaration, the two leaders emphasized the importance of maintaining peace and stability in the Taiwan Strait as a key element of security and prosperity in the Indo-Pacific. Last year, the ROK-U.S. statement did not include a section in the section on maintaining peace in the Taiwan Strait that defined Taiwan as “a key element of security and prosperity in the Indo-Pacific.” It is interpreted that the Yun Seok-yeol administration made clear its intention to cooperate with the United States, which is trying to put pressure on China on the Taiwan issue. It also included a statement that freedom of navigation and flight should be guaranteed in the South China Sea, which China claims but does not recognize by the United States. After the Taiwan issue was included in a South Korea-US statement last year, China protested, saying, “Don’t play with fire.”

Director Wang said on the 22nd, “The US is working hard to form a small group by forming a gang based on the Indo-Pacific strategy. His purpose is to try to encircle China.” “What is particularly dangerous is that the United States is attempting to disrupt the Asia-Pacific region by provoking Taiwan and the South China Sea card,” he said. The state-run Global Times warned, “If South Korea breaks the existing order with China and changes direction, the fundamental interests of both countries and the people of both countries will be hurt.” In response to National Security Office Director Kim Seong-han’s comments, Guan Cha-jeowang (觀察者網) said, “I don’t think there is any room for China to retaliate or misunderstand.” ” he warned. The Beijing Youth Daily reported that “South Korea expressed its intention to isolate China as a US partner in supply chain, security, trade and technology.” Shenzhen Satellite TV said, “If, like Japan, we change the framework of diplomacy by being swayed by the United States, Korea will surely pay the price.”

Experts pointed out that while it is unlikely that China will immediately take retaliatory measures against South Korea, efforts are needed to prevent deterioration of relations. “The United States should keep in mind that both checks and cooperation with China to protect its interests,” said Joo Jae-woo, a professor of Chinese language at Kyunghee University.

‘A completely different situation’… Should monkeypox be worried?