Despite the release of new “soybean dollar” that is helping the Central Bank to add reserves, December began with marked exchange rate volatility that is felt, above all, in los parallel dollars: the blue and the financiers.

In this context of new tensions in the market, uncertainty looms and many Argentines wonder what will happen in the coming months with the price of the dollar and inflation.

Within the framework of the unstable economic situation and a prolonged internship in the Frente de Todos that wore down the figure of President Alberto Fernández, so far this year the US currency remained consistently an important variable. As for the Dolar blue, is currently in a moment of calm. Last Friday, July 22, the informal bill marked a feverish peak of $350, to close that day at a value of $338. Since then, the blue has been on a seesaw that placed it this Wednesday, December 7, at a price of $316.

Meanwhile, the official dollar It is currently advancing in an accelerated micro devaluation with respect to previous months. The wholesaler finished this Friday’s wheel at $169.90.

An interesting and useful perspective on what is to come can be found in the REM survey of the Central Bankwhich concentrates new forecasts on what What will happen to the price of the US ticket? at the end of the year and in 2023. The monetary authority published this Friday the results of the monthly survey it carries out among consultants and analysts from the City. There, experts share their forecasts for the dollar priceinflation and GDP growth.

The financial market agents grouped in the Survey of Market Expectations (REM) estimated that the official wholesale exchange rate will reach the $172.42 per dollar at the end of December of 2022. This is a small increase from the previous REM forecast of $172.33. This indicates that the market believes that the reserves accumulated by the soybean dollar and the inflow of funds from international organizations will guarantee exchange peace, at least until the end of the year.

Evolution of REM forecasts. Price of the wholesale dollar projected for the end of December 2022.

In parallel, from the survey it appears that analysts foresee a price of the dollar of $320,39 for December 2023. This estimated price implies an increase of $0.89 compared to last month’s forecast.

As noted above, the wholesale dollar closed this Friday at $169.90, so analysts believe it has $2.52 still to climb until the end of this month.

Prices: what will happen to inflation

REM participants also anticipated that inflation of November 2022 amounted to 6,1%.

In addition, market analysts projected that retail inflation will accumulate during 2022 a 99%a slight drop compared to 100% that they had estimated last month. Likewise, the inflation forecast for the year 2023 It is 99,7%.

How much will the economy grow, according to the REM

REM analysts forecast by 2022 a growth of Gross Domestic Product (GDP) around the 5,3%which implies an improvement of 0.5 percentage points compared to last month’s survey.

The Survey of Market Expectations (REM) consists of a systematic monitoring of the main short and medium-term macroeconomic forecasts that are usually made by specialized local and foreign analysts, on the evolution of selected variables of the Argentine economy that are compiled by the Central Bank. 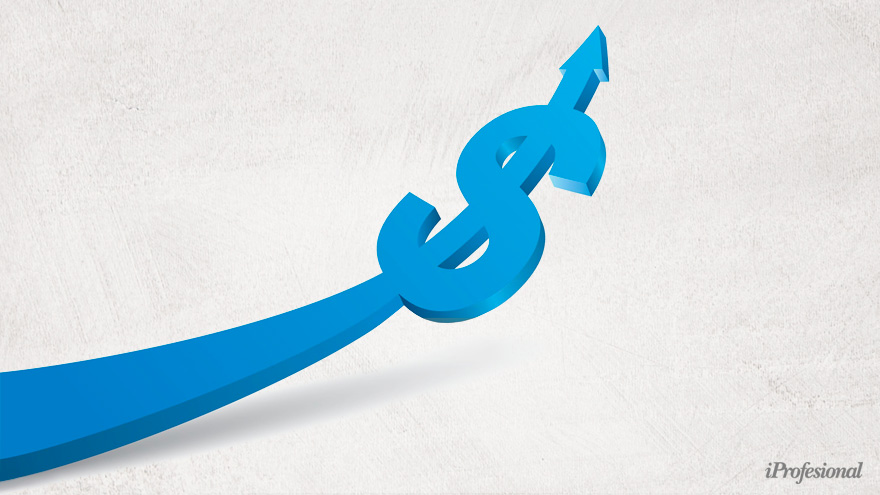 The expectations regarding retail prices, the interest rate, the nominal exchange rate, economic activity and the primary result of the non-financial national public sector are surveyed.

The latest report disseminates the results of the survey carried out between November 28 and 30.

The forecasts of 39 participants were considered, including 26 local and international consultants and research centers, and 13 financial entities from Argentina.

Price of the dollar in 2023: this anticipates FocusEconomics

In addition to the REM of the BCRA, another large survey highly regarded in the market is the one published monthly by FocusEconomics, the latest edition of which was released in mid-September.

In this case, some 40 national and foreign economists make their monthly forecasts about what will happen to the dollar in the coming months.

Regarding the projections for the wholesale dollar price for the end of next yearthe dispersion of values ​​among the experts is very wide, since it depends on how the Government handles the shortage of foreign currency and the inflationary pressures in the devaluation of the official exchange rate. 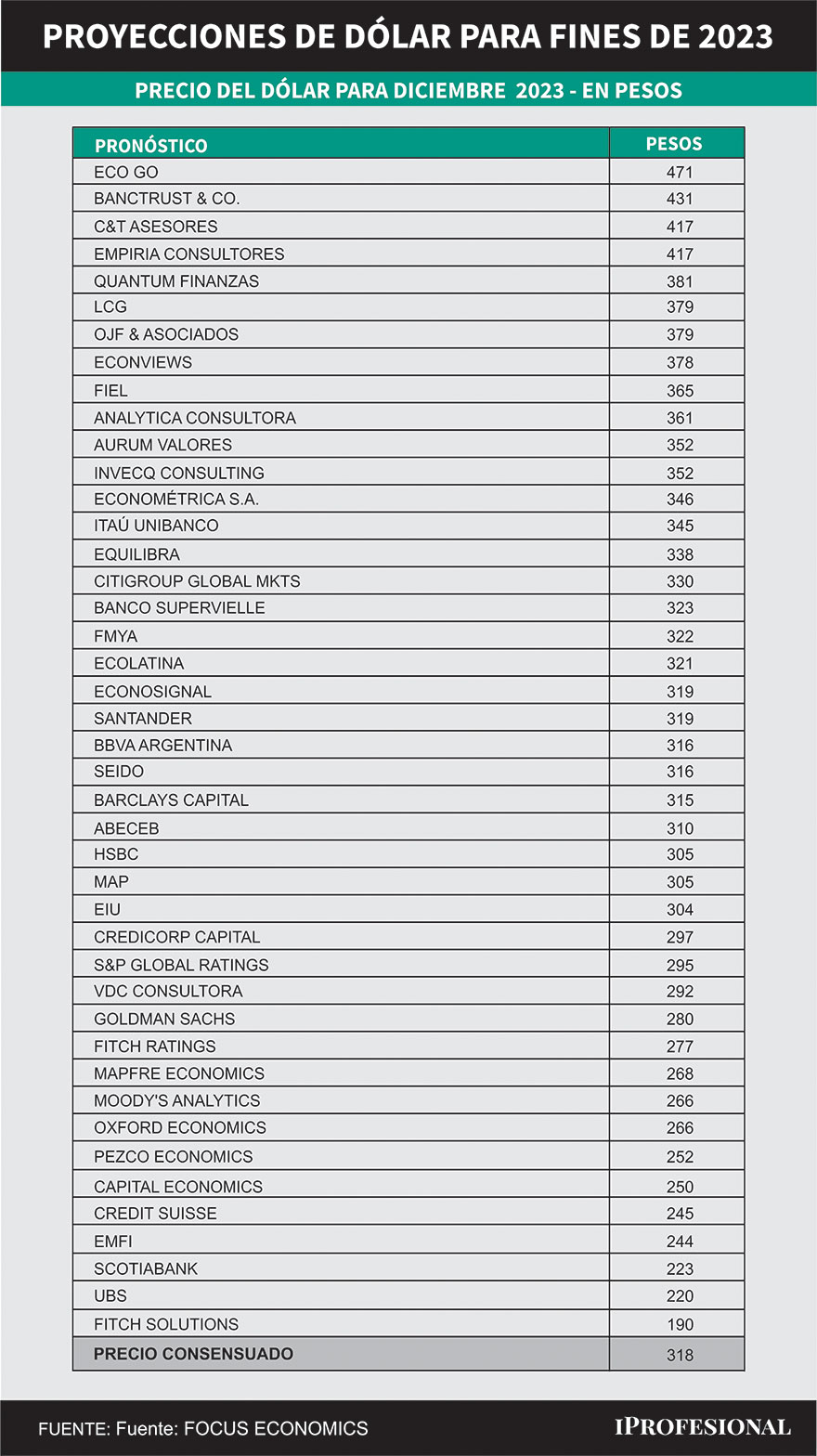 According to the latest FocusEconomics world report, the consensus exchange rate for Argentina is $318 at the end of 2023.

“The peso must lose more ground in 2023 due to the continuous printing of money and high inflation,” say the economists at FocusEconomics.

In this way, the consensus of the analysts surveyed in November details that the exchange rate will reach $318 at the end of December next yeararound 7.4 pesos more than expected in the previous report (October).

If this price is reached, based on exchange rate estimates for the last day of 2022, the increase in the price of the wholesale dollar for all of 2023 would be 85%.

A percentage that is just below inflation projections (90.5%) for all of next year.

As data to take into account, in the current 2022, according to projections, the official devaluation would mark around 68%while the prices of the economy would be above 96%.

In turn, the price estimated by international analysts for the The official wholesale dollar for 14 months from now ($318) is well above the value indicated in the 2023 Budget presented to the National Congress by the Minister of Economy Sergio Massa, which stipulates an exchange rate of $270 for the end of the year. the next year. 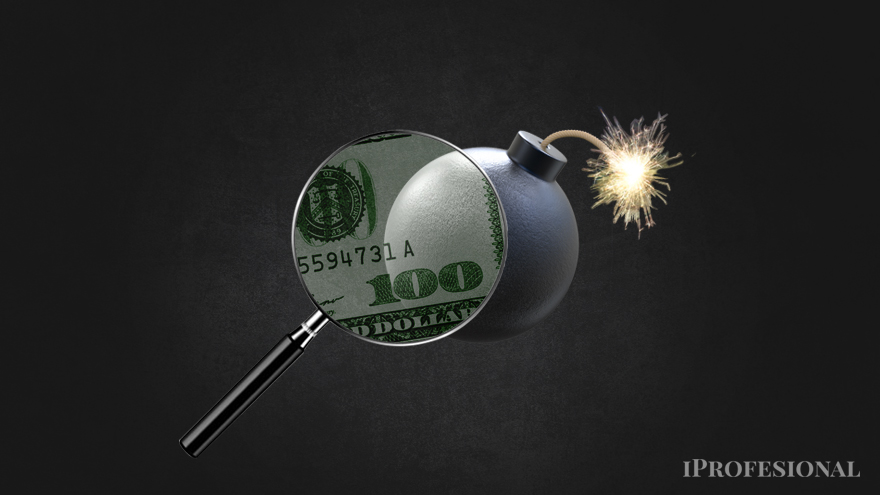 According to the economists surveyed, by the end of 2023 the wholesale exchange rate could reach up to $471.

And in the futures and options market of the Matba-Rofex a wholesale dollar price is operating for the end of September 2023, which is the last established period in which these contracts can be carried out, so $327. In other words, 9 pesos more than the consensus of economists in the FocusEconomics survey for December of next year.

Economists projections for the dollar

The specific projections of national and foreign economists from banks and consultancies for the wholesale exchange rate by the end of 2023 show a great dispersion in prices ranging from $190 to $471. This is due to the marked uncertainty that is opening from the political and economic point of view for the coming months in Argentina.

The highest price expected by analysts for the official dollar in the wholesale market by the end of 2023, is led by the consultancy EcoGo, with a forecast of $471 pesos. It is followed by BancTrust & co ($431), and C&T Asesores and Empiria Consultores, both with an estimate of $417.

“We are anticipating that the rate of devaluation will continue to be high and this number of $471 is also including that by the end of December 2023 the new government will already have taken office. So, the possibility that there is a unification of the exchange rate and an additional devaluation back then. Beyond that, there is still a long way to go and it is not known if this will end up happening. Even for November of next year, before the elected administration arrives, we are seeing an exchange rate of $370″, he affirms to iProfessional Sebastian Menescaldi, economist and associate director of EcoGo.

In it agrees Maria Castiglione Cottereconomist and director of C&T Asesores, with projections of $417: “On December 10, 2023, the Government changes, and if the opposition wins what the polls indicate, there will be some exchange rate unification, even if it is not total, to remove the stocks and make prices honest. So, between November and December of next year there will be a jump in the exchange rate, beyond what today is making gigantic futurology, as happened at the end of 2015, but at that time the gap was 25% and now it is 100%. “.

And he adds to iProfessional: “Beyond that, the exchange rate will move at the current rate, because there is no room for maneuver because there are no reserves in the Central Bank”.

For his part, Isaiah Marini, Econviews economist, who forecasts $378 by the end of 2023, adds: “The exchange rate that we project is consistent with a maintenance of the real exchange rate at year-end levels, that is, it implies a significant delay. But the government will have no choice but to speed up the devaluation.”

In your opinion, “There is no more room for delay, since even with a mega stocks and without energy imports the Central Bank loses millions of dollars per day. And the drought can really complicate the situation. So, if the soybean harvest projections, which remain optimistic, are not met, the government will have an ‘ugly’ time in an electoral context.”

Robert Williams could return in 10 to 12 days