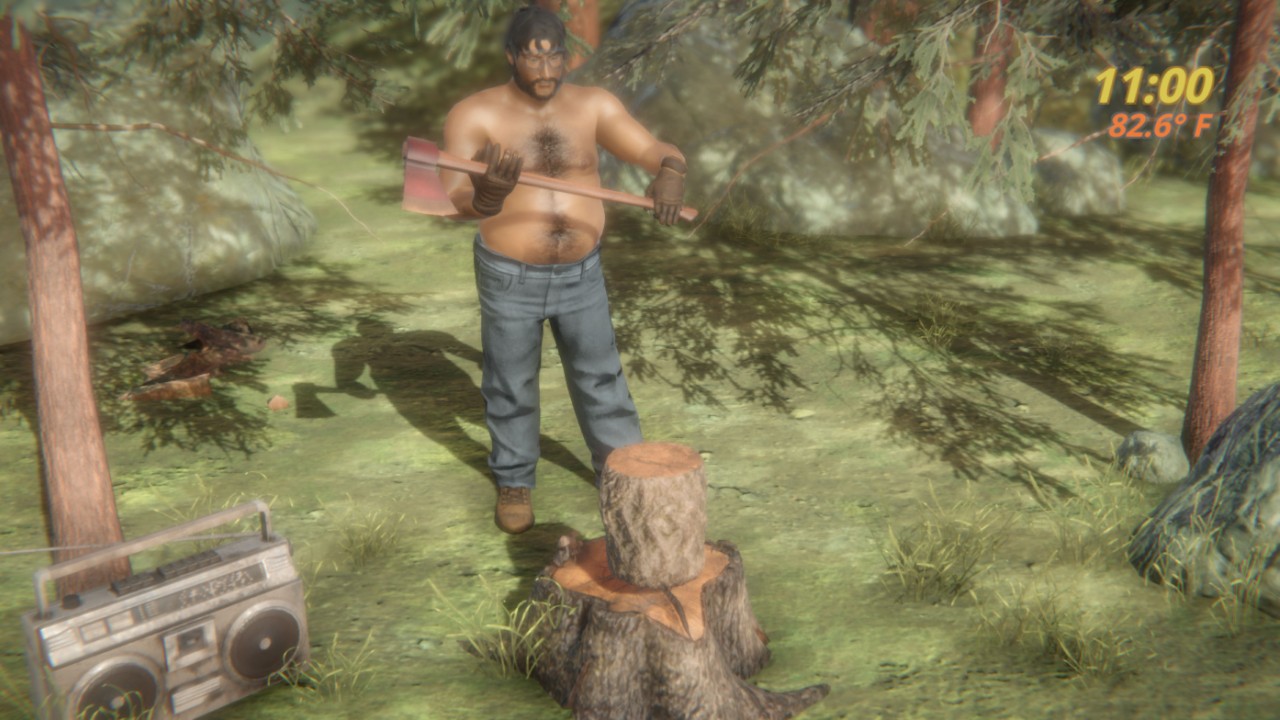 Inspired by recent logging, indie game developer Robert Yang spent two weeks making Logjam, a gay-to-adult game available for free download on Itch.io, ostensibly a simulation of a big man chopping wood in a forest. , but for the developer, there is a journey of self-discovery that he has to say.

The gameplay of “Logjam” is very simple. Just press the left button to raise the axe to cut a few counts. With the aim line swaying left and right, the landing point of your axe will be determined. 3 points are awarded for landing on the exact diagonal line, 1 point for falling on the horizontal line, and 0 points for missing the target at all.

The time and temperature will be displayed in the upper left corner of the game. When the temperature reaches a certain height, the fierce man will take off his clothes by himself.

As mentioned earlier, this is a gay-oriented adult game, and it tells you NSFW directly at the beginning, even if you open the main screen of the game, you can see a lazy dick without pants. Lazy lumberjack.

Why is it related to the developer’s search for himself, which he wrote very clearly in his development log.

To put it simply, when it comes to logging, Robert starts with the history of forest pioneering in North America, mentions the use of the axe and the cultural conflict between the Americans and the aborigines at that time, and even mentions the old American president Abraham Lincoln who chopped wood for the fence. painting.

The reason he did this was to discuss the ideology of logging, and to use this big lumberjack as a manifestation of subjective consciousness, so players sometimes chopped not wood, but Shiba Inu, or It is the bald eagle, the national bird of the United States.

The author wants the player to split the eagle to express what he wants to express. If you are not interested, you don’t need to know, but you must know that the cute little Shiba Inu appears. It is a bit difficult to think about not splitting him, because the movement of the aiming point will follow the The game moves faster and faster, and even if you want to aim for the sky, it’s not easy.

In addition to cutting some inexplicable things, the game will change the day. The first day you will be in the forest, the second day you will be in front of a wooden house, which is a symbolic shift for the author, most people yearn for independent utopian life, but the millennial generation I don’t even know how to cut wood.

As for why you have to chop wood until you strip your clothes, Robert said in the developer log, because these are the influences of modern Internet videos.

From the stoneware technology life videos created by the shirtless handsome John Plant of the Primitive Technology channel with more than 10 million subscriptions, to Thoren Bradley, the well-known lumberjack on TikTok, to the Dracon Blue of OnlyFans who keeps his lower body in a firm state and chops wood(for your own good)Obviously these idols are all developers Xinyi’s learning objects for chopping wood.

Naturally, they must also be icons for developers.

There are only 4 days in the game, and on the third day, the scene will become a forest on fire, and the lumberjack will be so hot that he will be naked, but he seems to be alluding to the famous meme “This is fine” in “Gunshow”.

You can only continue to cut wood, cut wood mercilessly.

On the last 4th day, the forest was burnt to black, and the lumberjack was still on time for work. Until noon, he would sit on a tree stump as usual to rest, but the 4th day seemed to be more spoof.

The lumberjacks are divided into two groups, one still maintains the action of logging, and the other is sitting on the stump, holding the mobile phone in one hand and the second child in the other to get comfortable.

Choosing to cut down, which is himself, seems to symbolize that the lumberjack has cut off his sense of self, or a metaphor of giving up everything. In any case, the game is over.

What the hell am I playing? This answer may only be known to the developer, maybe he wants to make people feel pain, maybe he wants to take the opportunity to promote the channel of the fierce man logging, but I don’t want to know, I just want you all to watch this game together. Give me Kangkang.

The male-on-a-gay-to-adult game “Logjam” is already in Itch.io Open for free download.

Jesús Garibay is murdered in the Tabasco ejido in Mexicali

infographic| 6 benefits of miswak to maintain oral and dental health