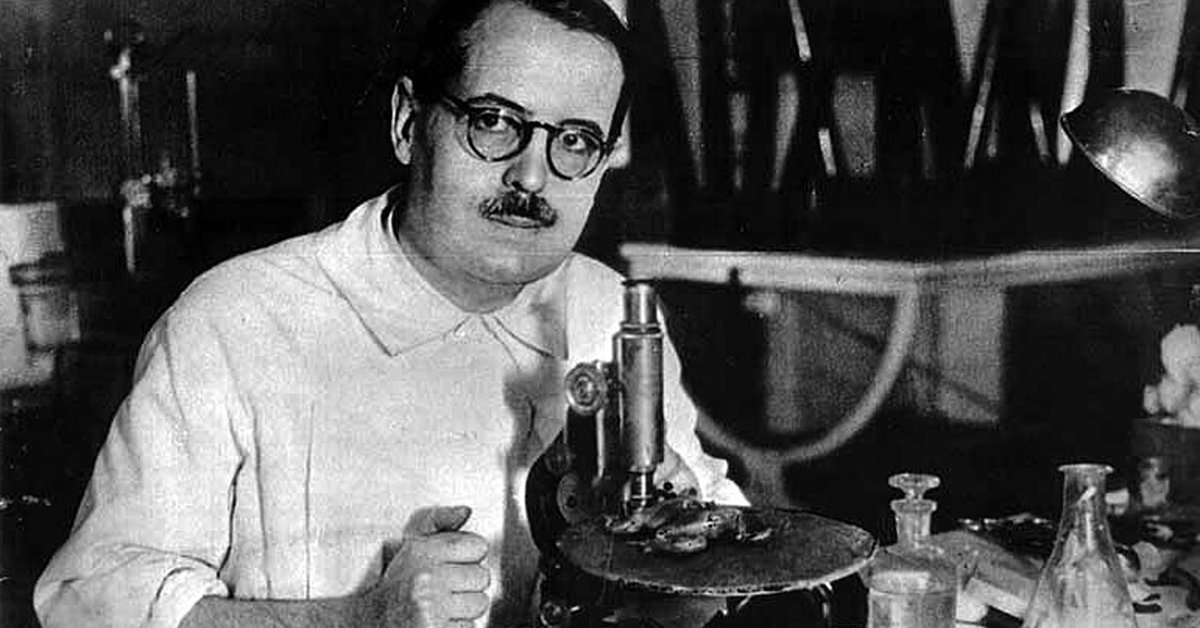 “The true supremacy of a people is based on the silent and obstinate work of its thinkers, men of science and artists; this work brings fortune and glory to the country, and well-being to all humanity”, said Houssay

“Science has no country, but the man of science has it. For my part, I did not accept teaching positions in the United States and I do not intend to leave my country, because I aspire to fight to contribute to my becoming a first-class scientific power, ”wrote Bernardo Houssay, whose death is 50 years old today.

When he made that statement, he was already an established scientist but his life – and his work – in Argentina were not easy. He had been awarded the Nobel Prize in Medicine in 1947 – he was the first Latin American to receive it. for his work on the influence of the anterior lobe of the pituitary in the distribution of glucose in the body, important for the development of diabetes. A vital discovery to combat that disease.

Despite worldwide recognition for his scientific contributions, in those years his relationship with the government of Juan Domingo Perón was difficult. In 1943, after the coup of the Group of United Officers (GOU), he had been separated from the direction of the Institute of Physiology of the Faculty of Medicine of the UBA, which he himself had created. He did not want to leave the country – neither then nor later – and in order to continue researching, he founded the Institute of Biology and Experimental Medicine in 1944, where he formed a scientific team to develop work on endocrinology, nutrition, pharmacology, experimental pathology, adrenal glands, pancreas, etc. hypertension, diabetes and other areas related to physiology.

His obsession was the scientific development of Argentina and he understood that for that he had to stay in the country. “Advising a country or university not to do fundamental research that is not immediately applicable is like inviting it to impoverish itself or to commit suicide (…) Those who express such criteria ignore – and this ignorance is very serious and harmful that all the great practical advances come from disinterested fundamental scientific research. Pure science is undoubtedly the source that incessantly feeds applied techniques ”, he maintained.

Houssay was born in Buenos Aires on April 10, 1887 into a family of French immigrants. At the age of sixty, in 1947, he won the Nobel Prize in Medicine

Bernardo Houssay was born in Buenos Aires on April 10, 1887. He was the fourth child of Alberto Guillermo Houssay and Clara Laffont, a French couple who had come to settle in the country the previous year, but the first of them who studied at the Argentina, because her parents had sent her three older brothers to study in France.

They sent him to what they considered the best school in the city, the Nacional Buenos Aires, where he entered with less age than required and graduated from high school at meteoric speed, giving several years off.

However, that degree obtained at the age of 13 did not help him to immediately follow the path he had set out: to study Medicine. The Faculty rejected him because of his young age. Instead, he was able to enroll in the School of Pharmacy and Biochemistry of the University of Buenos Aires, where he graduated at age 17. Then he did enter the Faculty of Medicine, from which he graduated with a medical degree at the age of 23. By then he had already taken his first steps in teaching and research: since he was 21 -when he was in his fourth year of his degree- he was already a professor of Physiology, a first-year subject.

In 1919, at just 32 years of age, he created and held the direction of the UBA Institute of Physiology. He was already a leading teacher and researcher, and there he developed the works that would lead him to obtain the Nobel Prize almost three decades later.

“Houssay was a physiologist, but, in essence, he was an endocrinologist with a strong attachment to biology. Why did you choose to work on diabetes? I don’t know, I never had the opportunity to talk about it with him ”, wrote this year the professor in Alejandro De Nicola, who worked closely with him, in an article entitled“ Our first hero of science ”.

When Houssay created the Institute of Physiology, it was already known that diabetes was related to a lack of insulin, although the physiological process that caused this deficiency was unknown. By then the research was focused on how to create insulin to help diabetics.

In 1921 two Canadian doctors, Frederick Banting and Charles Best, succeeded in isolating insulin and together with other experts were able to purify insulin obtained from bovine pancreas.

For this, they were awarded the Nobel Prize in 1923. Houssay, based on the research of Canadians, was the first to purify insulin in Latin America, even before they did it in Europe.

But the discovery that would allow him to win the Nobel – and his great scientific contribution – was when he was able to associate the disease with the pituitary or pituitary gland. He found that diabetics had an overactive pituitary gland, which led him to deduce that the hormones produced by the pituitary could be responsible for regulating blood sugar levels. And he postulated that by balancing these hormones it would be possible to control diabetes.

He began experimenting with animals, frogs, and dogs. “The Nobel Prize that Houssay received was for work using that approach. He demonstrated the role of the anterior lobe of the pituitary gland on carbohydrate metabolism. What is known in the literature as the ‘Houssay’s dog’ is an animal whose pancreas was removed and became diabetic; he found that removing his pituitary made diabetes better. He also described the role of other glands on diabetes, such as the adrenal and thyroid glands and was the first to describe that the blood that came from the hypothalamus reached the pituitary, bringing regulatory factors ”, says De Nicola.

For this finding, he shared the 1947 Nobel Prize with nationalized Czechoslovakian scientists from the United States, Gerty and Carl Cori, who had also been researching diabetes.

A simple and productive routine

Alejandro de Nicola worked with Bernardo Houssay since the late 1960s. By then, the Nobel Prize had regained the direction of the Institute of Physiology of the UBA, where he worked with the same energy as on the first day. De Nicola’s story serves to learn a little more about the man, his vocation and his routines.

How to describe a day in the life of Houssay? -writes-. At the end of the 1960s, I didn’t have a car and I came to the institute by bus, I don’t remember if they told me on line 59 or 60. He was already a widower and lived in his house on Viamonte street. Later, he told us that during the trip he took the opportunity to read all the street signs of the municipality and then he tried to remember them, he said that this way he sharpened his memory. Already at the Institute, before entering his office, the receptionist Zulema Rinaldo, brought him the brown coat. And he stayed in his office until 10:00. Then a bell rang and all the staff of the Institute, who would be 15 or 20 in 1970, would go to have coffee. It was a very large table and Houssay would sit at the head (…) At 10.30, 10.45 he would get up, say ‘to work, Bernardo’, and go to his office. Or if a dog operated, it would go to the basement of the Institute. At noon, Zulema would bring him lunch, and he would eat alone in a room in the library. In his office he received all the researchers, they discussed results and proposed the next steps (…) What was his office is still full of science books, including the editions in different languages ​​of his book on Human Physiology ”.

Until the last day

Not even in the most adverse moments, Houssay wanted to go to work abroad. For him, what is now called “brain drain” put at stake the development of a nation, for which scientific development was a fundamental piece.

“Science is not expensive; face is ignorance, “he once said.

In 1958 he was one of the promoters of the creation of the National Council for Scientific and Technical Research (CONICET), the most important scientific institution in the country.

He was president of the Argentine Association for the Progress of Sciences, the National Academy of Medicine, the Argentine Society of Biology and the International Diabetes Federation. Due to his importance in this field of medicine, he also had the opportunity to teach courses at the most important institutions in the world.

He could have settled in any developed country in the world to continue researching, but year after year he rejected all international offers made to him, and he also dedicated many hours of his life to training disciples in the area of ​​Physiology and helped many other scientists to develop their research and their careers.

One of them was the doctor and biochemist Luis Federico Leloir, who worked with Houssay at the Institute of Physiology. The teacher directed his doctoral thesis on the adrenal glands and carbohydrate metabolism. The disciple was awarded the Nobel Prize in Chemistry in 1970 for his research on sugar nucleotides and their role in the manufacture of carbohydrates.

Houssay continued working until the day of his death, September 21, 1971, exactly half a century ago.

Thus, he fulfilled a goal that he had set himself and that he did not stop stating: “Human work must be uninterrupted throughout life until stopped by death“, He said.

The life of Luis Federico Leloir, the winner of the Nobel Prize in Chemistry who always regretted not having patented golf sauce
The Government decided that 2021 is the year in tribute to an Argentine Nobel Prize in Medicine
The moving story of Julio Aro, the Malvinas veteran nominated for the Nobel Peace Prize