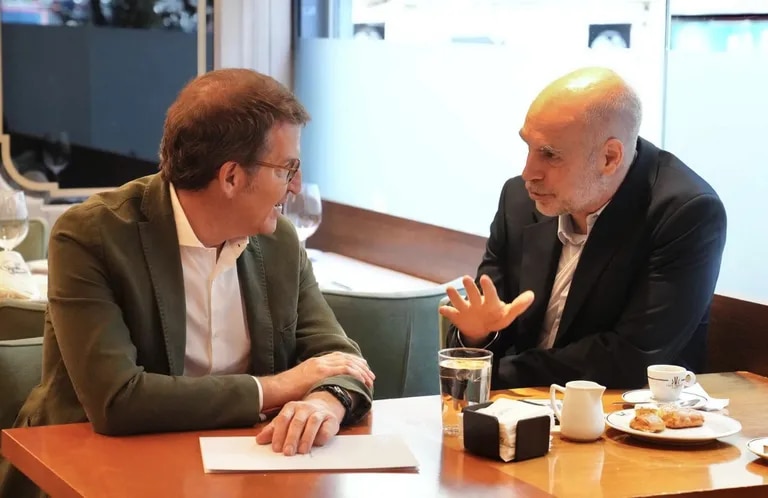 The internal battle in the front of all and the acceleration of the economic and financial crisis in the country turns on the warning lights on the board of referents of Together for Change who aspire to compete for the succession of Alberto Fernandez in 2023. He barely arrived in Argentina after his tour of Israel, where he held meetings with the “architects” of the stabilization plan that that country applied in the 1980s to lower inflationthe head of the Buenos Aires government, Horacio Rodriguez Larretaassessed with concern the growing deterioration of the economy, especially after the Central Bank (BCRA) will apply a package of measures to curb imports, with the aim of stopping the bleeding of reserves.

In the meetings he held this week with his closest collaborators, Larreta was alarmed by the symptoms shown by the economy and the political earthquake that is shaking the government. In private, the mayor of Buenos Aires draws a harsh diagnosis of the economic scenario, although he does not predict a “collapse” that triggers an inflationary escalation nor does he see elements for a political catastrophe that may lead to an eventual advancement of the presidential elections. Larreta heard that “hypothesis”, but speculates that the government still has tools to contain the situation, according to sources from Buenos Aires.

The mayor is concerned, above all, the possible paralysis of the economy after the Central Bank ordered new measures to restrict the outflow of dollars for the payment of imports. He anticipates that the new trap will generate more inflation in the short term and it could cause a shortage of products, such as coffee, in different sectors of the economy. At the headquarters of the Buenos Aires government of Uspallata, they fear that the new restrictions will cause a “Ready” in factories that require imported components to produce. They are also concerned about the lack of diesel and the ball of debt in pesos that the next administration will inherit.

Like other opposition leaders, Larreta perceives a change in the vice president’s attitude Cristina Kirchner, who not only distances himself from Fernández with his public criticism of the economic course, but also begins to show signs that he intends to rebuild his political capital and recruit allies among the governors and mayors who until recently leveraged the President. “She seems to be more concerned and busy, but it is not clear what she wants to do,” they say in Larretismo.

In the mayor’s environment they repeat that the problem of the economy is the lack of confidence and the Government does not have a plan to right the ship. What’s more, they don’t even imagine that a profound change in the Cabinet, with the eventual entry of Serge Massa, would stop the deepening of the crisis. Although he is attentive to the social situation -the capital is usually the scene of mobilizations by piquetero organizations-, Larreta cut off his dialogue with Fernández and the highest government authorities. He does not foresee taking them back, even if an inflationary spiral or a political crisis is unleashed. “He doesn’t have any tools or elements to do anything concrete, just show his face. The dialogue with the Government is inconducive”, they say, with resignation, near Larreta. The head of Buenos Aires was heard ranting against Fernández for the lack of response from the Casa Rosada in the face of the collapse of the police stations in the City and the short circuits due to the interruption of the work in the new prison of Mark Peacewhere the Buenos Aires Executive planned to send inmates after the move from the Devoto prison.

Fernandez’s fury against Hernan Lacunza, whom he accused of encouraging an exchange rate run, generated outrage in the ranks of Larretismo. “It is nonsense to blame our economists for fueling the fire for an off. For Fernández to say that is a sign of enormous weakness. It’s ridiculous”, they ranted in Parque Patricios.

In his recent visit to Israel, Larreta sought to nourish himself with arguments to give the internal discussion in Pro about what should be the strategy of political construction of the space. While Macri or Patricia Bullrich bet on a disruptive change in 2023, the head of Buenos Aires is convinced that Argentina needs to bet on a broad consensus to give sustainability to an economic plan.

During the tour, in which he was accompanied by the Secretary General and Secretary of International Relations, Fernando StrafaceLarreta held hearings with Manuel Trajtenbergexecutive director of the Institute for National Security Studies, and Esteban Klor, a professor at the Hebrew University of Israel, among other economists and politicians who designed a stabilization plan for Israel in the 1980s. That program arose from an agreement between the two dominant forces at the time: the Labor and Likud parties.

“This plan is the result of a broad agreement between the political forces that made the reduction of inflation a State policy that is maintained to this day,” said Larreta after the series of meetings with Israeli government and parliamentary authorities.

In the City they admit that the israeli case It cannot be “extrapolated” to Argentina, where the room for maneuver and the social fabric is different, but there they revalidated their theory that politics must seal a broad agreement around a comprehensive economic program. “The concrete measures of the stabilization plan will depend on the moment. The economic recipe is not the most important thing, that is achieved”, they repeat.

In fact, the president of Israel, Isaac Herzog, told him that the anti-inflationary plan of the 1980s was successful because not only was society convinced that it was possible to stop the spiral, but also the creation of “a coalition government with broad political support.” They also spoke about the mysterious case of the Iranian plane held in Ezeiza.

Larreta insists that his goal is to build a government with 70 percent of the system – he only excludes Kirchnerism, Serge Massa and to the “populist extremes”-. He knows that it will be difficult to incorporate Peronists or other sectors into Together for Change before the elections. It is clear that, if he wins, he imagines forming a coalition Cabinet. “We can add some for the second round and others for the Government. The deeper and more ambitious the transformation, the broader the support must be”, they point out close to the mayor.

For Larretismo, the openness model will cause a shock of confidence and give sustainability to the economic plan for two or three decades. “The more support for the plan, the more chances we have that it will be sustained. That generates a virtuous circle: stability and more investments”, they repeat in the City.

New update in “WhatsApp” to deal with annoying messages